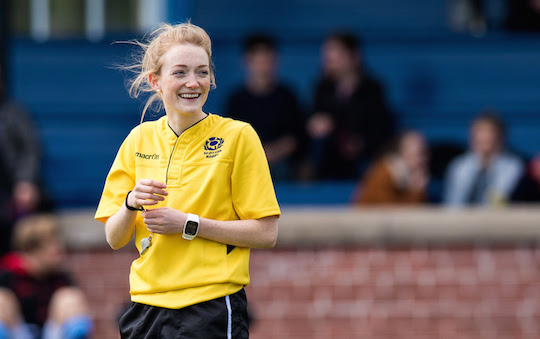 Less than two months after being announced as the country’s first contracted female referee, Hollie Davidson has been named as one of the officials for the upcoming Women’s Rugby World Cup.

You’ll have noticed there isn’t much hype around these parts for the event, which Scotland didn’t qualify for, but this represents a fillip for Scottish Women’s rugby when the eyes of the rugby world are on Ireland in the coming weeks.

This is another fantastic achievement for the former Under 20’s international who has already been appointed to a number of HSBC Women’s World Rugby Sevens Series tournaments, and Davidson looks well on her way to meeting her target of officiating at the Tokyo Olympic Games in 2020.

Speaking of her appointment, Hollie said:

“It’s an honour to be called up to the match officials team for the Women’s Rugby World Cup, and I’m very excited to represent Scotland at one of this year’s major sporting events. It only comes around every four years so to get this opportunity is incredible.”

One comment on “Davidson to officiate at Women’s World Cup”