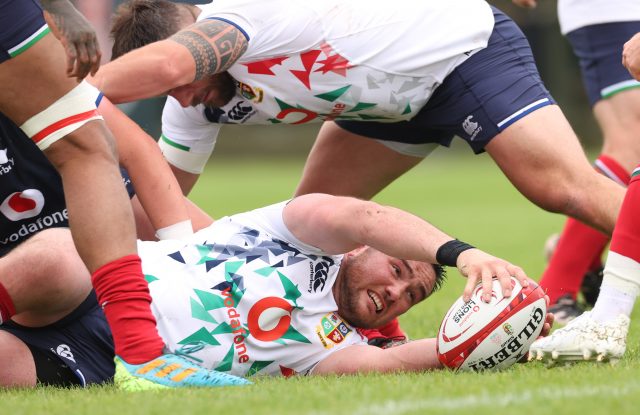 The last time the Lions played the Sharks, Scotland’s only contribution to the 39-3 win was ten minutes off the bench for Mike Blair. Further back in 1997 things were a lot more healthy with Tom Smith, Gregor Townsend and Alan Tait all starting as the Sharks were put to the sword 42-12. It was a big day for Toony as he notched a try and also banged over a drop goal against a side he would go on to play for in the 2004 Super Rugby season.

(NB: all stats below relate only to the professional era – 1995 onwards – unless specifically stated.)

Six Scots in the matchday squad is the equal highest for any pro era Lions’ side – matching the half dozen who featured against the Sigma Lions last weekend.

When he crossed against Japan, Duhan van der Merwe became the fourth Scottish player to score a try on their Lions’ debut, following in the footsteps of Doddie Weir, Rob Wainwright (both 1997) and Simon Taylor (2001). Josh Adams has set the bar high so Duhan will need to get involved as much as possible against the Sharks if he’s to keep pushing for a Test place.

Zander Fagerson is the seventh Glasgow Warriors’ player to start for the Lions, with all bar Gordon Bulloch having done so on the last three tours. Another eight of Scotland’s Lions have played for the Warriors at some stage in their career. As the third of the three tightheads to get a start, Zander needs a big performance. He may need to risk conceding penalties by looking to dominate the scrummaging battle – one area the Lions have yet to really impose themselves on so far.

On Saturday, Ali Price became the first Scottish 9 to score a try for the Lions in the pro era. As the only scrum half in the 23, Ali has a huge opportunity to set down a marker for Test selection following an excellent showing against the Sigma Lions. In particular his box kicking was on point with the best possession retained percentage so far among the Lions’ 9s. He may need to manage his energy levels so he’ll be looking for more of the same from his kicking game in order to impress Warren Gatland and the rest of the Lions’ coaches.

Rory Sutherland will need to hit the ground running from the bench. It’s a role he has fulfilled regularly for Edinburgh – he’s been a sub in 26 of his last 41 club appearances – but it’s more than five years since he last featured as a replacement for Scotland.

Hamish Watson loves a good bench cameo. Not many who were there or watching that day will forget him coming on as a replacement against Wales at Murrayfield and breaking 10 tackles in the space of 22 minutes. Hamish doesn’t need much to get him up to speed – just warm him up and let him rip!

Finn Russell is rarely a bench option for Scotland – just once in his 55 caps has he come on as a replacement. This is a good opportunity to audition for a potential sub’s role in the Test matches. Hopefully there are more wram-up matches to come and he still has a further shot at grabbing the number 10 jersey as well.

The officiating trio rotate from Saturday’s game against the Sigma Lions with Mr Peyper taking over as the man in the middle. The South African official made his Test debut as a ref in Scotland’s 9-6 thrashing of Australia in 2012. It’s been more than four years since he took charge of a match involving the dark blues though.

The Welsh contingent on the coaching team should have more up-to-date info on Mr Peyper who took charge of their RWC 2019 quarter-final win. Hopefully, he doesn’t bear any ill will after photos taken with some Wales’ fans cost him a shot at refereeing a World Cup semi-final…