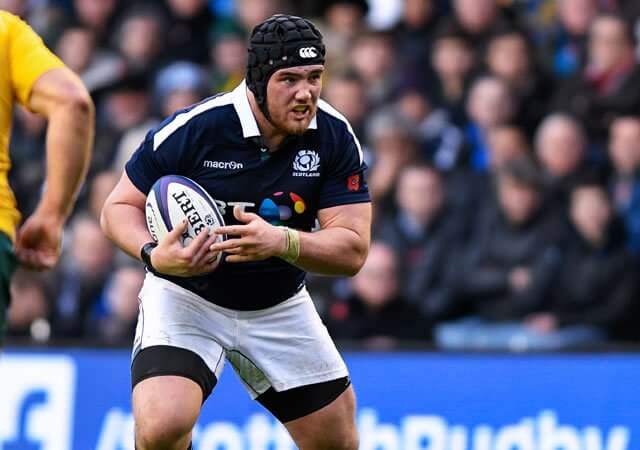 Kicking off the Scottish Rugby Blog’s week-long look at the national team’s Conveyor Belt with the front row – the best-looking and most talented members of any team (source – any prop ever).

Running in to the 2019 World Cup this was a tricky position for Scotland. Allan Dell was embedded as first choice with Gordon Reid heading for the Super 6 and Jamie Bhatti’s form dipping. By the end of July, while Dell may still be an option, he’ll find himself as fifth choice at best – he’s likely only to be called upon in an injury crisis in future.

Rory Sutherland’s return from injury hell has been spectacular. Oli Kebble qualified for Scotland last Autumn. Pierre Schoeman will qualify in July of this year. Jamie Bhatti has found his form down at Bath and will be back home at Scotstoun next season. These four should see Scotland through the majority of the rest of the RWC cycle and into the tournament itself. There will be a hell of a battle though, with not enough room for all four men in the initial squad.

Most likely to be capped for the first time this summer:
Pierre Schoeman. This is slightly dependent on the timing of any matches. The Edinburgh loosehead will become Scottish qualified towards the end of July.

While Scotland may have stumbled into a glut of looseheads the medium to long term issue is that they are in the same age band. Even the youngest of them – Pierre Schoeman – will be 33 by the time the 2027 RWC rolls around. The problem for the next generation is that the group currently in the 26-29 bracket will hoover up the Test caps as well as an awful lot of the minutes at club level for the next three or four years. How do the young lads develop sufficiently if they don’t play?

Players like Sam Grahamslaw at Edinburgh and George Thornton at Glasgow will need to seize their opportunities whenever they get the chance for 15/20 minutes here or there. It’s not an easy thing to do but both looked good at age grade level for Scotland U20s.

Further afield, Nathan McBeth has played Super Rugby for the Lions. There might be a tension there between his desire to play for the land of his birth – South Africa – or whether he will progress further with Scotland, having played at age grade level for both countries. Sale’s Bevan Rodd will face a slightly different conflict of opportunities, with Eddie Jones and England reported to be sniffing around the Dunoon-born player.

Other options for 2027:
Boan Venter (24.0) – Edinburgh. Can qualify on residency in time for the 2026 Six Nations.
Alex Pleasants (20.5) – Wasps. Currently on loan at Ampthill in the Championship.
Tom Lambert (20.4) – Glasgow. Has been in a Warriors’ matchday squad but yet to make his debut.

For the last three and a bit years, the Scotland number 2 jersey has been dominated by the dynamic duo of Fraser Brown and Stuart McInally. Until this season’s Six Nations, Brown and McInally had accounted for all bar four starts at hooker in the previous 37 Tests.

Injury-enforced absences did at least allow George Turner and David Cherry to demonstrate the strength in depth beyond the top two. Both of those replacements are in a similar age bracket though. With even Turner hitting 31 while the 2023 RWC is in progress, the next couple of years probably have to include some efforts to extend Scotland’s options in this area.

Most likely to be capped for the first time this summer:
Ewan Ashman. The Sale man has been in and around the Scotland squad throughout the current season. Depending on who is available then new Edinburgh signing, Adam McBurney, might not be far off his first Scotland call-up.

As mentioned above this is a position that is reasonably well set for the short term but with a lot of questions to be answered beyond the next World Cup. As of next season it’s possible that both Glasgow and Edinburgh will have fully Scottish-qualified rotations in their Depth Chart. In the Warriors’ case though the youngest of their quartet will be Grant Stewart who will be edging towards 33 by the time of the 2027 World Cup.

Edinburgh will have a couple of younger players in the shape of Adam McBurney and Patrick Harrison (18.8). Harrison recently made a remarkably assured club debut and will be 25 and hitting his peak at the end of that RWC cycle. Even allowing for circumstances, playing for a pro team as a teenager suggests the hooker is highly rated. With this being possibly Scotland’s thinnest position long-term – at least as far as confirmed potential goes – someone like Harrison breaking through would be huge for both club and country.

The player with the most buzz around him in this role is Ewan Ashman. He seems to share some rugby DNA with both Brown and McInally. Like both of those men he has played in the back row for his club. That style would be an ideal fit for the transition from the current incumbents with Scotland needing a voluminous workrate and turnover threat from their hookers, to go alongside setpiece basics.

Other options for 2027
Angus Fraser (21.3) – Glasgow. He should be one rung closer to game time as Glasgow look like they will only have four hookers (instead of five) in their 2021/22 full-time pro squad.

This is the first position in the squad where there is the potential for the current first choice to run through both of the next two World Cups. Zander Fagerson’s contributions in attack and defence allied to his maturing work at the scrum could (with a fair wind) take in a couple of Lions’ tours in addition to those World Cups.

Positional depth and, ideally, challengers to the elder Fagerson for the number 3 jersey are where questions start to arise in both RWC cycles. Willem Nel has been a stalwart since qualifying for Scotland just under six years ago. He’s not a realistic option to make it to France though. Simon Berghan is five years older than Fagerson but his solid dependability might well keep him in the squad right the way through until the 2023 tournament.

Beyond that there are players who demonstrated plenty of potential at age grade level and the early stages of their club career but who have yet to really break through as first team regulars for the biggest fixtures. D’arcy Rae, Murray McCallum and Adam Nicol may still have further opportunities ahead of them but all three are reaching the stage of needing to show a big step forward if their ultimate ambition is to win a decent number of Test caps.

Most likely to be capped for the first time this summer:
Possibly no new faces. Dan Gamble would have come into the reckoning but a recurrence of a shoulder injury is likely to rule him out. Elliot Millar-Mills might be a longish shot to provide some cover. Currently with Ealing Trailfinders, he will be a Wasps’ player in the Premiership next season.

Zander Fagerson will be 31 when the 2027 World Cup kicks off. That’s definitely not old for a prop but he did start his pro journey as an 18-year old so there will be a fair amount of miles on the clock by then. His stated ambition to play in the Top 14 won’t help in that respect – although if it’s just for a couple of seasons then he could be back in Scotland and having his minutes managed in plenty of time to extend his career on to at least 2027.

Scotland need to find a more consistent conveyor belt of talent at tighthead prop, otherwise Zander could spend the next six years without even having to look over his shoulder too much. There are a couple of prospects coming up on the rails but taking differing routes in their professional careers. Dan Gamble has already debuted for Edinburgh while he’s been part of the Scottish Rugby Academy. Injuries hampered his Scotland age grade career (and have possibly prevented him getting some more minutes this season for his club) but when he has played he has looked a very solid prospect.

Following some excellent showings for the U20s in the 2020 Six Nations, Mak Wilson (20.8) opted to move to Harlequins academy rather than progressing through the Scottish system with either Glasgow or Edinburgh. It was a bold decision from the former Melrose man and he’s yet to make his debut for the Premiership club. As a prop, this will be a long-term project for Harlequins and Wilson will hopefully learn plenty while he’s down there from the likes of Test tightheads Wilco Louw and Will Collier and coach Adam Jones.

In case you missed it, the introduction and details of the Depth Chart Conveyor Belt criteria are here.