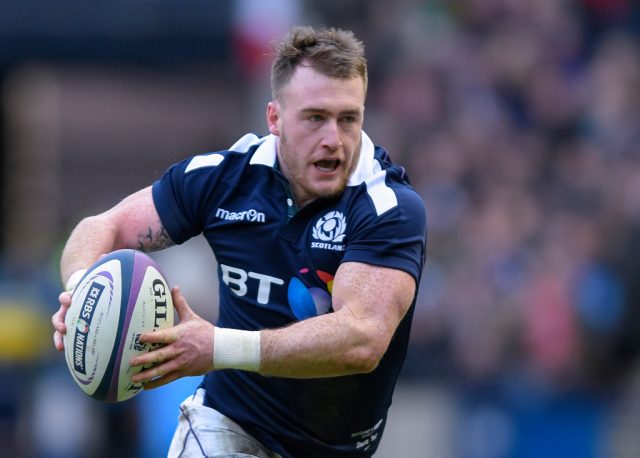 Had there been a sniff of a chance that Scotland were still in the running for the title it may have been the focus of this week’s narrative, but most thoughts have turned to one thing: Stuart Hogg playing at 10.

“A hugely exciting challenge for me. Finn and Jaco have been absolutely outstanding this week in helping me along and guiding me through”, said the Scotland captain.

As excellent a full-back as Hogg is, his exposure at Test level in the stand-off position is limited. Since their introduction to the professional game, Hogg and Russell have shown themselves to have that smoking-gun, match-winning moment in their armoury, but they go about it in different ways. Russell will look to sneak his way around the defences, whereas Hogg is more likely to fire up the jets and race away, or at least play more directly.

“I won’t say I’m anything like Finn Russell because nobody in the world of rugby is. The big thing for me is getting basics right and getting good positions, allowing us to go forward with momentum. I feel I’m ready for it.

“Finn has been absolutely tremendous this week. He’s obviously bitterly disappointed that he picked up a head knock and timing wise it has ruled him out, but he’s been there for us all to help with the preparation.

“He’s watched a fair amount of rugby for us, he’s analysed training and had suggestions about where we can learn and improve. So, he’s been absolutely brilliant and I would expect nothing less from him because he is a world class talent who cares massively about this team.”

Given how poor Italy have been in this season’s tournament, we here at SRB Towers – or at least me, Cammy and John did – have predicted a landslide victory for Scotland, an assessment the bookies agree with*, however it’s often felt that Italy leave something in the tank for a game against Scotland as one fixture they view more realistically as one to win.

Some have questioned if playing Hogg at stand-off is being disrespectful to the Italians, but Hogg, who was in the Scotland side the last time Italy won a Six Nations match back in 2015, paid due respect to this weekend’s opponents.

“We have all played Italy in the past and now that this is the game they always come gunning for. The last time they won in the Six Nations was here in 2015. We know very well how good they can be, so the important thing is that we start really well, get on the front foot and make sure were clinical. If we can do that we will gain confidence and build nicely.But the longer Italy are in the game they will grow in confidence.

“It’s going to be one hell of a challenge for us. We feel we’ve played some good rugby but a lot of things have let us down, unfortunately. It’s all about being squeaky clean and making sure we do the basics really well, front up defensively and have a clinical edge in attack. Hopefully that will be enough to keep the scoreboard ticking over.”

Hogg will be accompanied at half-back by Scott Steele – the scrum-half/winger/openside hybrid player that Eddie Jones once had a cheese-dream about, then decided that was going to be Jack Nowell’s new position – and although they may be unfamiliar on the pitch, they know each other well off it.

“His dad and my dad were both referees. We would always meet up at Langholm sevens because Dumfries is pretty close to Langholm. We used to play alongside his two older brothers as well.

“He has been absolutely terrific. 12 months ago it seemed he wasn’t going to have a contract but he worked incredibly hard over lockdown to get himself in shape and get himself a club. I think he’s been absolutely outstanding for Quins in the games I’ve watched this year. Since coming into the Scotland camp he’s had a cap on the wing, another in the back row and he has brought big energy and impact when he has played at nine. I’m absolutely delighted for him.”

After having had at least Toony, Finn and Jaco nipping in his ear all week about how to play stand-off, did a certain family member who was involved in Berwick’s sensational National Shield win of 2019 also offer any advice?

“Absolutely not. I had a good conversation with him last night. He’s probably my number one fan, and he’s just been telling me to relax and enjoy it. He wants me to get some spirals in there. That’s all he’s looking for.”

*This article was not sponsored by any bookies, so if you think it’s crap blame me, then Rory for allowing this kind of crap on his website.