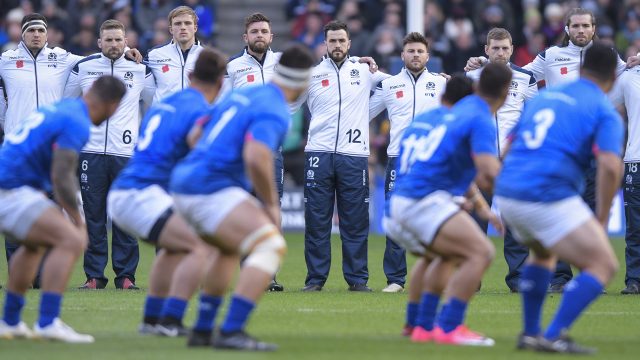 Having put Scotland’s dismal past against Tier 1 nations front and centre for last week’s preview then ahead of the game with Samoa it’s only fair to highlight the dark blues’ perfect record versus Tier 2 and 3 teams.

20 matches have come and gone across 8 tournaments and the win rate has remained at 100% against opposition from outside the top level.

There have been close calls mind you. Few closer than four years ago against the same opposition as Monday’s game. A Samoan side with no chance of progressing further in the 2015 tournament gave Scotland a real scare in Newcastle and nearly ended their chances of making the quarter-finals.

Record in this RWC cycle

Nobody in Pool A has played fewer Tests in this RWC cycle than Samoa. Next in line are Japan with 31. Ireland, Russia and Scotland have all played 40+ capped internationals in the last 4 years.

Manu Samoa have played 6 times against Tier 1 opposition since 2015, losing all 6 by an average score of 15 – 46. Those numbers are skewed by a 0 – 78 hammering from the All Blacks though. The Pacific islanders did get within 2 points of Wales in Apia and within 6 points of Scotland at Murrayfield.

For those who saw his performance at Murrayfield where he was quite probably the outstanding individual on the pitch that day, it would be hard to believe that the 2017 Autumn Test series would be followed by a 2 year hiatus in Tim Nanai-Williams’ Samoa career. The utility back only returned to his national side for their final RWC warm-up match against Australia.

If he makes the starting XV he’ll bring previous experience of conditions in Japan from two seasons in the Top League with the Ricoh Black Rams. More recently he’s been teammates with Greig Laidlaw at Clermont, demonstrating his versatility by starting games at stand off, full back and on the wing.

His presence takes some of the pressure off veteran stand off, Tusi Pisi as the key decision-maker. An elusive runner, Nani-Williams will pop up everywhere and the Scottish defence will need to be at its best to stop him finding gaps or creating space for others.

Key stats from Round 1

Samoa played Russia in their opening game of the 2019 RWC. These were some of the takeaways from that fixture:

Scotland have played Samoa 11 times with the countries’ first meeting coming in the quarter-finals of the 1991 World Cup. The head to head looks like this from Scotland’s perspective (RWC matches underlined):

It’s worth noting that in each of Scotland’s last 4 wins (since 2010) Samoa have finished the match less than a converted try down on the scoreboard. It’s probably worth preparing for another nervous 80 minutes’ viewing…

Significant stat
18 turnovers conceded by Scotland. The attack was firing in this match – when Scotland held on to the ball. The trouble was possession was frequently conceded too easily and instead of being able to shut Samoa out of the game the visitors were given opportunity after opportunity to keep coming back.

There were only 2 lost rucks and 1 lost maul so nearly all the turnovers came from handling errors. Scotland will need to do an awful lot better in this facet of the game if they are to put Samoa away on Monday.

This will be the 29th game of the Townsend era. It will also be the 7th occasion in that period that M. Gauzere has taken charge of a Scotland match. Scotland haven’t lost the penalty count in any of those games, which is a record they will want to extend against Samoa.

The French official seemed a bit irritable last time round in Georgia, dishing out 25 penalties in total. That was a rather scrappy warm-up match with little on the line. In the cauldron of a meaningful RWC match, the expectation would be that M. Gauzere, in common with most experienced officials, will look to keep the game flowing and the penalty count will be lower.

With tackle heights a massive focus though (especially in light of some high profile on-field misses by the officials in the first week), even the most laissez faire referees surely won’t hesitate to go to their cards during the rest of the tournament. Scotland need to keep low to avoid the kind of problems that could disfigure this game – and their remaining fixtures.

Part II of the preview, including the head to heads, will follow on Sunday after the team announcement on Saturday.