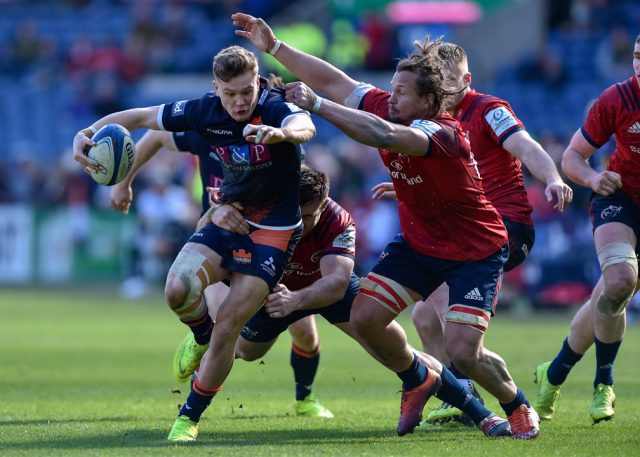 As was proposed at the dawning of the Pro14, the end of the second season shall see a shuffling of the teams between the two conferences to shake up the fixture lists.

In all, three teams have swapped over, and to many commenters it appears that Conference A seems to be the more top-heavy, whilst some are also claiming the usual Guinness-led conspiracy to ensure an all-Ireland final for next year. Seems there’s a few people with dapper tin-foil hats they want to show off.

The teams have been combined into one league and ranked over the 18/19 21-match regular season ONLY, then ranked nationally, then they’ve tried to split it evenly by seedings, yadda yadda: it’s all explained on their website here:

Here are the teams, with union and ranking within that union, in parenthesis.

When are the competition’s champions not regarded as the best team from their country? When the Pro14 administrators are running the show, that’s when!

Despite being the only team to have won the Pro14 in the two seasons it’s been running, and having two European Champions Cup final appearances with one victory during the same timeframe, Leinster have bizarrely been ranked as Ireland’s 2nd best team, due to Munster accumulating a solitary point more than them during the regular season.

Realistically, we can put this down to Leinster taking their foot off the gas having romped to the top of Conference B last time out, securing their home semi and allowing the likes of Johnny Sexton a breather, whereas Munster and Glasgow were going toe-to-toe up until the very last match of the regular season.

The Emerald Isle’s 3rd best team, Ulster, who Glasgow so comprehensively beat in the recent semi-final, will also move from Conference B to Conference A, meaning Dave Rennie’s men will face them twice during the next 2 seasons. (Not to mention 2 pre-season friendlies recently announced for the upcoming term, so they’ll be seeing a lot of each other.)

Former Warriors’ coach Dan McFarland made a big impact during his first season at Ulster, taking them from a disappointing 4th place in Conference B in season 17/18 to that Scotstoun semi-final, so a trip to Ravenhill could soon prove as daunting as the trips to Thomond Park if this improvement continues.

The other team moving from Conference B are the Dragons of Wales, and let’s be frank, unless there’s some massive squad and management overhaul, facilitating a massive upturn in the hapless Dragons’ fortunes, they should be there for a brace of 4-try plus beatings, as will Zebre and the Cheetahs for the big boys in the group. New Director of Rugby Dean Ryan won’t be taken for granted though.

After a subdued second Pro14 season for Cockers’-led Edinburgh, the capital side will be locking horns with Munster more often over the next 2 years, which should lead to some tasty encounters.

Both sides utilise the box-kick and like an arm-wrestle probably more than any other in the competition, and excluding Munster’s rampant 44–14 win against an under-strength Edinburgh in November 2018, nail-biters such as the 17/18 Pro14 and last season’s Champions Cup quarter-finals, could see an intense rivalry build between these two.

Joining them from over the Irish Sea will be Connacht, the team who shocked us all in winning the 15/16 Pro12 Championship at Murrayfield, and completed an Irish clean-sweep when qualifying for the most recent Pro14 quarters.

Given that it may be pushing two years since Edinburgh fans last took a trip to Galway, (a 29-22 victory in March 2018) here’s a gentle reminder about the conditions at the Sportsgrounds: it will be windy. It will probably also be wet. If you are going to wear a kilt for God’s sake use a sturdy kilt-pin, otherwise you might cause an international incident.

Also joining the Conference B party will be the Cardiff Blues, who have already snapped up Welsh internationalists Josh Adams and Hallam Amos to bolster their back-three options, but have lost fly-half Gareth Anscombe to the Ospreys. Cardiff had a mixed bag of a season, only losing twice at home, and very narrowly, to Leinster and Glasgow. They would, in fact, have been Wales’ #1 had they not been lost 23-26 to Ospreys on the last matchday. But they only won three times on the road against Scarlets, Dragons and… Edinburgh.

Given that it’s a World Cup year the scheduling of the fixtures might play a bigger part than usual in deciding team line-ups and therefore outcomes. I still can’t see past Leinster and Glasgow topping Conference A, due to the strength in depth of their squads, with the reigning champions just edging it.

If the tumultuous Ospreys can keep their star-men fit, and financially afloat, they could challenge Ulster for 3rd spot, but I’d still fancy the Ulstermen to take the 3rd spot, with the other 3 sides being also-rans. I do still expect a couple of shock results though, with so many players involved on World Cup duty.

Conference B is maybe a bit harder to forecast. Munster, Ireland’s best team (seriously, what were the Pro14 thinking?) are the side with most pedigree and know how to win when it matters, so I see them claiming the home semi-final spot as conference champions, but then after that, it’s harder to tell.

Edinburgh, Cardiff, Connacht and the Scarlets, who were injury-ravaged for much of last season and missed the influence of Tadgh Beirne and John Barclay especially, can all take points off each other, and the surprise package of last year, Benneton, cannot be discounted from the play-off mix either. But, putting my best patriotic hat on, I’ll tip Edinburgh to recruit shrewdly to make the quarters along with Cardiff Blues.

17 comments on “Conference(s) of Cards”