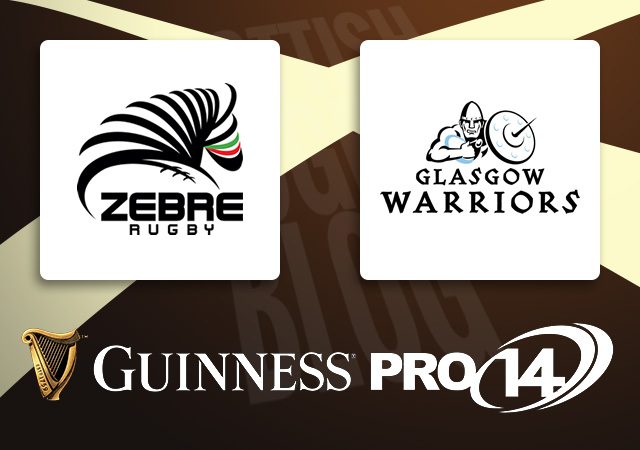 The youngest Glasgow team that Dave Rennie had ever assembled, ably guided by some of the longer in the tooth members of the pride, tore a dishevelled Zebre to shreds, and abetted by Munster’s defeat at Parc Y Scarlets, moved to the top of Conference A.

Zebre opened the scoring through Carlo Canna’s penalty, but the feebly moustached Italian (he must have felt somewhat inadequate, maybe even emasculated, when in the vicinity of Ruairidh Jackson) stand-off’s night was to go downhill at a rate of knots from there. That was also to be the home side’s lot for the first-half, as the Warriors soon clamped their jaws round the scruff of the game’s neck.

It was from the resultant kick-off that Glasgow first bared their claws. Rob Harley gathered after Zebre had made a hash of gathering, and a few phases later Swinson was over the try-line but was held-up for a Glasgow 5m scrum. With penalty advantage from the scrum, Swinson again found himself over the try-line, but again he was held-up, so the Warriors went back to the 5m scrum. Again they got the shove on and had the advantage, but the momentum and position encouraged Matt Fagerson to pick up from the base and the back rower charged through the tackle of Tommaso Castello to put Glasgow in front.

Zebre then had a period of possession dominance and were playing with width but the Glasgow defensive wall stood firm, and took full advantage when that defensive dominance left Zebre short of numbers at the breakdown. Captain for the night, man of Italian descent Chris Fusaro, latched onto the loose ball and charged home from roughly halfway, to deliver a real sucker-punch. Hastings conversion clipped the inside of the post but it still went over for a 14-3 lead.

Stafford McDowall then channelled his inner-Matt Fagerson to take the ball from a short-range line-out and burst through Tuivaiti’s tackle to score his first Warriors’ try. It was just reward for a powerful performance from the young centre, who also topped the tackle count with 17 and on two occasions used that rocket-launcher in his left-foot to give Glasgow good field position.

The latest member of the 150-cap club, Ruairidh Jackson, sealed the try bonus before half-time with a bit of good fortune. Hastings’ grubber through ricocheted off the boot of the hapless Canna into the majestically moustached full-back’s path, and after a bit of juggling he was in by the sticks.

The next score followed soon atfer. Oli Kebble burst through one challenge and off-loaded beautifully to the onrushing Matt Fagerson for his second of the night within half an hour of play, and they nearly scored again with their next attack. Hastings, back to full-swagger mode, made another line-break and dished a no-look, pop-pass to Frisby who seemed to take a straight arm hit from the frustrated Canna. Kebble in particular took umbrage with the challenge and a penalty was given against him for a bit of argy-bargy in the aftermath to cede another threatening position, although with the Warriors in this type of mood, the threat could come from any and everywhere.

Mind how I said at the start about Carlo Canna not having the best of nights? Well with terrible moustache comes great irresponsibility, as he was yellow-carded for a deliberate knock-on within a minute of restart. Glasgow again took their pound of flesh.

Hastings went to the corner, Zebre infringed again near their line for a second bite at the rolling maul, which on this occasion Swinson took over the try-line and managed to ground. Hastings maintained his 100% accuracy off the tee with conversion number six.

In credit to the home side, they levelled the second-half scores while still down to 14 men, Castello picking a line outside of Cummings to dart over for a score which full-back Brummer converted with Canna still on the naughty step.

These were to ultimately prove to be the last points of the match, as with the game won and a raft of changes being rung, including Niko Matawalu coming on at scrum-half for the first time in years, the gravy train of tries was kept at the station.

The only other major flashpoint came in the 66th minute, when Carlo Canna, and his rubbish moustache, was ordered off the field for lashing out with his boot at replacement tight-head Darcy Rae after the Glasgow man had caught him a fraction late. A night to forget for him.

Professional and clinical, Glasgow can take these 5-points home and hope that nobody gets injured on international duty before the next fixture against Cheetahs in three weeks. They’ll pose more of an attacking threat, but you’d imagine Glasgow would have enough strength in depth to overcome that hurdle, then there’s basically three cup finals remaining as they look to book a home semi-final. For now at least, they’re in the driving seat.

SRBlog MOTM: crafty veterans Harley and Fusaro were excellent in defence and at the breakdown, Ruaridh Jackson displayed some nice touches and ran effectively on a big night for him, but the returning Matt Fagerson gets the nod. Showed a lot of energy round the paddock and grabbed himself a brace of tries.