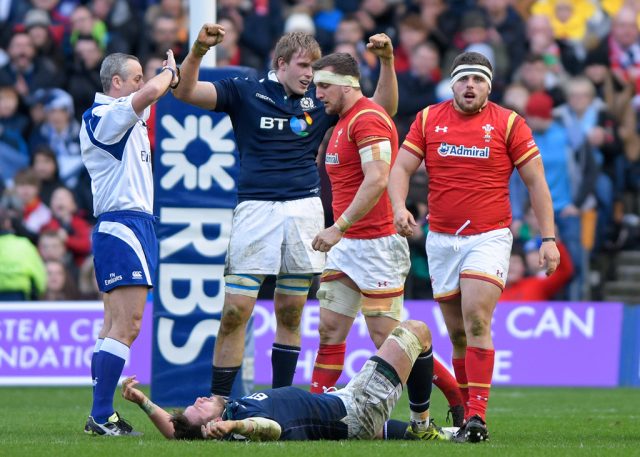 Over the past dozen years Wales have been the most difficult defence for Scotland to unlock in the Six Nations. Since 2007 when Warren Gatland took over in charge of the Welsh national side (bringing defence coach Shaun Edwards with him) Scotland have managed less than a try a game in these contests.

Scotland’s tries scored against the rest of the Six Nations since 2007:

Scotland’s forwards in particular have toiled with breaking down the red wall. John Barclay’s early score in 2010 and Jon Welsh’s late consolation in 2015 are the only times a member of the Scottish pack has scored against Wales during the championship in the last 15 years.

The dark blues’ attacking platform has been exponentially better in recent years though. They’ve scored more tries in their last 17 Six Nations’ games than they did in the 45 fixtures prior to that. It’s that latter strong form they need to bring to this fixture. They need to put tries on the board to have a chance of beating Wales.

Against England the Welsh backs actually managed a higher tackle completion rate (91.1%) than their forwards (90.5%). Now that will at least in part have come down to some pretty ordinary decision-making by the English half backs compared to the continued effectiveness of their monster pack. A lot of it comes down to Wales’ defensive structures and discipline though – allied to some good old fashioned belligerence!

The opening 40 minutes of the tournament in Paris did provide some evidence that it is possible to get at the Welsh defence, particularly out wide. It needs pretty much everything to go right though – good decisions, excellent execution – to beat their linespeed and get round the edges.

There are some similarities in where the two sides get their workload from in attack – but some notable differences too when considering what percentage of carries each area of the team provides.

The Welsh back row doesn’t lack for graft but there’s a heavy reliance on Ross Moriarty to get them going forward. There’s much more direct threat from half back, particularly at scrum half where the visitors have twice as many carries and metres as Scotland.

In the midfield the numbers are probably influenced by a quiet spell by the lofty standards of Jonathan Davies. Scotland really need to keep things that way if they want to blunt the Welsh attack.

George North tends to get a lot of the attention (and his nose for a try is still remarkable leading to plenty of high profile interventions) but it’s Liam Williams and Josh Adams who have been the rocks in the Welsh back 3. They’ve combined to catch 32 kicks so far in this season’s tournament, defusing bomb after bomb. Not only that but they’ve done it while committing minimal handling errors and gaining acres of territory through their own kicking and running games.

It’s possible that the return from injury of Leigh Halfpenny could squeeze one of these men out (almost certainly Adams rather than Williams) but whether one or both plays they will be key to how well Wales can counter the Scottish kicking game.

This will be the 10th time the two sides have met in Edinburgh for a Six Nations’ match. The head to head looks like this from Scotland’s perspective:

Most recent meeting at Murrayfield:

Significant stat
17 turnovers conceded by Wales. Scotland were extremely aggressive around the contact area, turning over 5 Welsh rucks. The visitors’ problems didn’t stop there though. Despite only having about two thirds of the number of carries Scotland put up Wales made more than double the handling errors. These were often in crucial attacking positions as well, killing try scoring opportunities and letting the home side off the hook.

No referee has taken charge of more Scotland fixtures over the past 5 years than M. Gauzere. It’s not even close in fact with this being the experienced official’s 10th Scottish game since 2014. The next highest tallies are 6 each for Romain Poite and John Lacey.

Every game exists in its own microcosm but the trend has seen Scotland move from conceding a flurry of yellow cards and struggling a bit with M. Gauzere’s breakdown interpretation to, seemingly, a pretty decent rapport and understanding with the French ref.

Part II of the preview, including the head to heads, will follow on Friday after the team announcement on Thursday.

Injury update (5/3/19): Sean Maitland (foot) and Chris Harris (calf) have been ruled out of the Wales game through injury. With insufficient recovery time available to feature in the championship’s penultimate round, Maitland and Harris will return to their clubs for ongoing care and assessment.