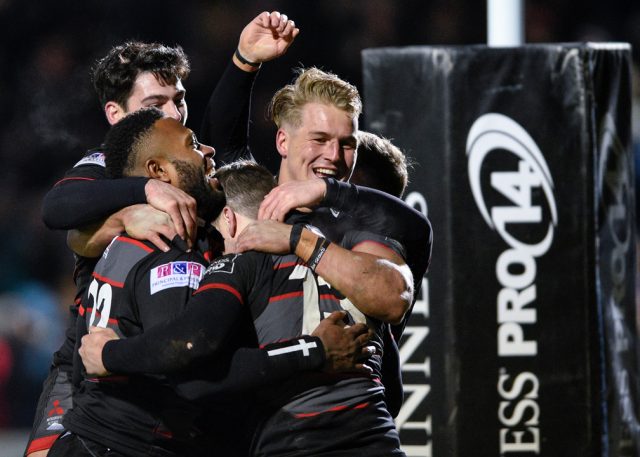 Over the past few months my social media feeds have been littered with claims that the PRO14 is the best league in Europe. I’ve also been extolled to support random PRO14 clubs in European competition against French or English clubs because, well, I’m not quite sure why.

I don’t support a league. I don’t buy PRO14 branded clothing, although quite weirdly it does exist. I support a team within that league. Occasionally, and I mean very occasionally, I hope that one other team in that league does ok, even though it tends to make me feel a bit dirty. It’s still a team though.

I do watch a lot of rugby and when, for example, I turn on the TV to watch a random Irish team v a random French team all I care about is that it’s an entertaining game. The only time I deviate from that is if a team has someone playing for it that I don’t care for *cough* Maro Itoje *cough*, then I may hope that team get beat.

So whilst the question of which is the best league is an interesting one I don’t think it’s empirically possible to determine such a thing. But let’s have a go anyway using cold hard facts.

First up then it’s probably no surprise that the best supported league in Europe is the Top 14 with average attendances in season 2017-2018 of 14,341. The Premiership is just a little shy of that at 14,164 over the same period whilst the PRO14 trails with an average of 8,561.

That measure of popularity is reflected in the respective TV deals. The Top 14’s deal with Canal+ is worth £305 million but is due to expire at the end of this season. The Premiership’s deal is with BT Sport and is worth £152 million. That deal has 3 full seasons to run. The PRO14 is the poor man in this company with their recent deal with Premier Sports being worth a mere £30 million.

The good news for fans of teams in the PRO14 though is that every game is available to watch live, making the subscription a worthwhile investment. The French league has 55 games live on Sky in the UK and Canal+ hold the rights to show all 7 games per weekend in the Top 14.  Premiership team fans only get 80 live games a season.

That is the commercial side of things. So how do the leagues compare for entertainment and competitiveness whilst sticking with the facts?

The average number of tries per game is a reasonable yardstick for entertainment and the three leagues are close at 5.3, 5.8 and 5.9 per match with the PRO14 taking the win in in this particular comparison, based on matches in the 2017-2018 season.

It’s reasonable to assume that games with a wide winning margin are less competitive and it could also be argued that fewer close games i.e. more without a losing bonus point being recorded is a similar reflection on competitiveness. Unfortunately it’s the PRO14 that holds that doubtful distinction in both cases.

Other measures of entertainment are more subjective.

Does having big name foreign imports trump being able to see next generation of home grown talent?

If you were choosing a game to watch purely for rugby pleasure would it be Exeter v Saracens, Leinster v Munster or Racing 92 v Clermont?

Does the pressure of relegation add or detract from the spectacle and the quality of the rugby played?

Does the razzmatazz of Racing’s 21st century stadium make for a better atmosphere than you get at Scotstoun, where Glasgow having been playing in front of sold out noisy crowds for ages now?

Perhaps the only other quantifiable measure of entertainment or competitiveness is the number of clubs that have won their respective leagues. No one wants to see the same teams win the title over and over again. But looking at the last 10 years there’s nothing in it. 6 different sides in France and England and the PRO14 edging it again with 7. Hardly overwhelming.

The last and biggest yardstick is the performance of teams in the Heineken Cup.

But before I even open that box let me say I don’t buy it that performance within the Heineken Cup bears any relation to the strength of the league that a team has come from. Neither do I see any reflected glory for my own club in seeing other clubs from the PRO14 progress through any misplaced sense of celtic loyalty.

There are too many differences in its format, the timing of the matches and the level of importance individual teams place on it to make that comparison relevant in any meaningful way.

And whilst I consider the lack of relegation in the PRO14 a major plank in its success it does allow its’ clubs to rotate their squads, promote youth and for the most part be ready to rumble when the Heineken Cup comes around. This is a good thing for the PRO14, and it’s a good thing for player welfare and development.  But it is also a thing that allows them to compete strongly in Europe where others may toil a bit as they worry about their domestic position.

It’s true and we should rejoice in it.

Anyway, despite my misgivings here are more facts.

Since the inception of the Heineken Cup in its many guises PRO14 sides have won it 30.4% of the time.  This is the same as English clubs but it’s worth remembering that the PRO14 success in Europe is a purely Irish affair. French clubs have won it 39.2% of the time.

If success can be defined as winning the trophy then dominance of it could be considered to be regular progress to the semi-finals. In the last 10 years French clubs have contributed 35% of the participants, English 22.5% and PRO14 clubs 42.5% (Irish clubs 35%, Scots 2.5% and Welsh 5%). So the PRO14 has an advantage here but it’s not the overwhelming dominance that some have ascribed to it.

So the best league in Europe?  Does it actually matter? As far as I can see they’ve each got something to recommend them. It’s all rugby at the end of the day.

I’ve recently heard some English pundits bemoan the fact that their top players are split over 12 clubs and it’s that that has held them back in European competition and on the face of it that argument has some merit. Take into account though that 75.9% of all the players in the countries that make up the three leagues are registered to play in England and it crashes and burns like the England team at Murrayfield in 2018 or like Scotland in France in, well, forever.

There are actually more people playing rugby in England than in France, Scotland, Ireland and Wales combined.

So to my mind the question is not which is the best league but more why, with all their money and advantages, is it not the Gallagher Premiership or The Top 14 by a country mile?

10 comments on “Is the PRO14 the best domestic league in Europe?”