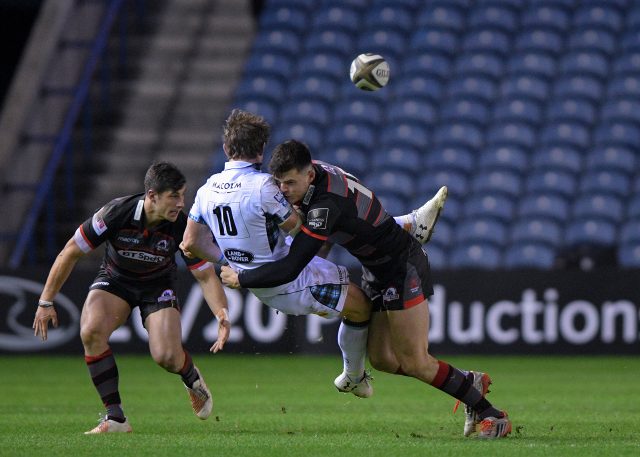 Edinburgh put in a huge collective effort to stay close to Glasgow despite a one man disadvantage and then managed to make just enough luck to nick it at the end. Here are my individual ratings.

15. Blair Kinghorn: Counter-attacked well and looked comfortable under the high ball. Kept the Warriors honest with ball in hand but did not reach the heights of his Challenge Cup performances against far superior opposition. 7/10

14. Dougie Fife: Limited chances with ball in hand and felled by two monster tackles when he did get in on the action. Worked hard in defence, and made one crucial tackle to stop Huw Jones. 7/10

13. James Johnstone: Another who had little chance to show his attacking prowess, but he carried well when asked and stuck to the task of matching international centres well. 7/10

10. Jaco Van Der Walt: Made a brilliant break, only to lose the ball thanks to Seymour’s stray boot. His kicking game pinned Glasgow in their own territory and he carried a fair bit to help out his outnumbered forward pack. A good showing from the South African. 8/10

9. Sam Hidalgo-Clyne: Bossed the forwards perfectly and controlled the tempo after Berghan’s dismissal. Kicked well both territorially and for the posts; looks like he’s almost back to the top of his game and will challenge for a Six Nations squad place. 8/10

1. Rory Sutherland: Scrum struggled at times but given their numerical disadvantage, and that the Hawick man has been out for months injured, he can be pleased with his input. Carried well and didn’t shirk his tackles before being replaced early in the second half. 8/10

2. Stuart McInally (capt): Outstanding. Interventions at key times broke down Glasgow attacks, lineout functioned well and the skipper for the day was everywhere in the loose, whether it was to carry or fell a Glasgow player in defence. 9/10

3. Simon Berghan: Lasted no more than five minutes after putting his boot on Fraser Brown’s head. Cockerill will have had his side raring to go, but moment of madness from the Scotland tighthead nearly cost them dearly. 1/10

4. Ben Toolis: Edinburgh’s lineout master will be disappointed with the manner of Scott Cummings’ score, but he worked tirelessly all game and disrupted the Glasgow maul on more than one occasion. 8/10

5. Grant Gilchrist: A mountainous performance from the former Stirling County man, who was Edinburgh’s top tackler. Took a lot of lineout ball, including the throw that led to the match-winning try, and made some big hits. 8/10

6. Viliame Mata: The Fijian did all the hard work you’d expect of a blindside – hit rucks, made tackles (including one thumping effort on Matt Smith) and carried to win his side hard yards. A fine performance showing he has the grunt to go alongside the Olympic gold medal-winning 7s flair. 8.5/10

7. Hamish Watson: His game was over by the ninth minute, replaced to allow Shields on after THAT red card. Did nothing wrong while he was on and made a couple of good carries. 6/10

8. Cornell Du Preez: Another who looks nearly back to the peak of his powers. Made some thumping tackles and was a constant carrier as Edinburgh slowed the tempo of the game down. 8.5/10

16. Neil Cochrane: Not the same impact as McInally but the veteran played his part – 6/10

17. Murray McCallum: Put his hand up to carry after replacing Sutherland and scrum did not deteriorate any further – 7/10

18. Matt Sheilds: Involved much earlier than he would have expected. Scrum struggled at times, but not solely his fault. 6/10

19. Lewis Carmichael: A late addition to the bench after Fraser McKenzie withdrew, he came on in the back row and made a couple of good carries. 7/10

21. Nathan Fowles: Continued Hidalgo-Clyne’s good work in managing the game and frustrating the Warriors. Took his try superbly at a crucial time – 8/10

22. Chris Dean: The match winner. Snuck over after a terrible Lee Jones tackle, but had shown up well prior to that after replacing Burleigh. 8/10

23. Darcy Graham – Didn’t have many chances to get involved but worked hard. 7/10