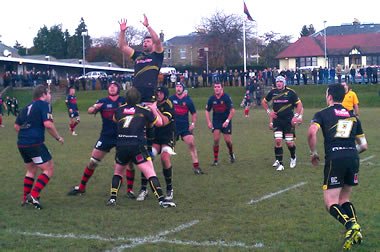 As the tender process opens on 20 November for obtaining a “Super 6” semi-professional rugby franchise from the 2019-20 season, it is to be hoped that Scottish rugby will heed the lessons learned from both Ireland and Wales and not just from its own history, writes Geraint Powell.

Irish rugby managed a successful transition into the professional era, under the central oversight of Syd Millar and Tom Kiernan in particular, the limited historical four provincial teams were successfully utilised as the full-time vehicles for commercialised professional rugby.

History is not usually particularly kind when it comes to Ireland, but up to four professional rugby teams could be afforded and many rugby fans had a natural affinity towards Leinster, Munster, Ulster and Connacht. Populations have cared about these Irish provincial identities long-pre dating any form of organised rugby union. And they still did in 1995.

With the flourishing of these professional provinces and the subsequent major growth in their home crowds, entering their “A” teams in the British + Irish Cup was both logical and uncontentious.

If Irish rugby successfully managed the transition from the amateur to the professional era, then Welsh rugby gave a masterclass in failure. If Irish rugby was a union of provinces, aligned with historical political and geographical provinces, then Welsh rugby was very much a union of clubs and with no such natural provinces. And even at the top end of the club game in viscerally tribal South Wales, the clubs were very diverse with 18 in the ring-fenced top echelon as late as 1990.

The Welsh Rugby Union did not take charge in 1995 and set about establishing an order for a new professional game, and the vacuum was filled by businessmen acquiring ownership of the biggest clubs. We were still trying to run nine professional clubs as late as 2003, haemorrhaging money and long overdue a resource concentration in terms of players and financials down to four teams.

When the resource concentration into “regions” came in 2003, a fresh start was frustrated by the pre-existing major club vested interests. An intended region for North Wales was thwarted, and the four South Walian “regions” were effectively by 2004 just the Cardiff, Newport and Llanelli clubs plus a more meaningful coming together between the Swansea and Neath clubs to create the Ospreys.

With the demise of the superfluous fifth team (Celtic Warriors) in 2004, an ill-suited amalgamation between the Bridgend and Pontypridd clubs, the South Wales valleys – the Welsh rugby equivalent of the Scottish borders – were left unrepresented and mostly alienated from regional rugby. The poor crowds attending regional rugby in Wales has become a source of open ridicule.

Welsh rugby has in recent seasons entered embryonic “A” teams in the British + Irish Cup, so-called Premiership Selects, but the performances in terms of results and attracting fans have been dismal. The player development pathway requires four full-time regional “A” teams, whilst the slow pace of evolution towards true representative regional rugby in Wales prevents it.

Scottish rugby had the opportunity to replicate the successful Irish provincial mode, utilising the four historic rugby districts of Edinburgh, Glasgow, the South of Scotland and the Midlands/North (Caledonia), but sadly blew it and despite the best efforts of Jim Telfer amongst others.

There were undoubtedly complications.

The SRU is a union of clubs, some wary of the power of such districts. Some leading clubs wanted to be the vehicles for commercialised professional rugby themselves. Aberdeen and Perth are geographically separated, in terms of alternating home matches, and there was and still is ferocious club tribalism in the Borders. The SRU was still heavily in debt from redeveloping Murrayfield, and regulated private investors were required from the outset, but nevertheless…

Having lost two of the four professional districts sides, with serious implications in terms of the number of professional teams domestically supplying the national team, two “A” teams were and are not a realistic option and the “Super Six” semi-professional franchise solution is clearly an attempt to seek to improve on the pathway job that has until now been delegated to the ten team Scottish Premiership league.

But the warnings from Irish and Welsh rugby, as well as from Scottish rugby history itself, need to be heeded in relation to this resource concentration. Player development in a commercial and cultural vacuum increases the financial stresses, as any lack of self-generating revenue will see either underfunding or resource diversion from elsewhere.

In terms of sports clubs, there is nothing more difficult than getting individual fans and wider communities to switch allegiance to a historic rival. This is especially so if done in connection with their own club being downgraded. To use a football analogy, having one Glasgow professional district football team would come with its unique challenges. But as nothing compared to requiring Rangers fans to go and support Celtic at Parkhead, or vice versa asking Celtic fans to go and support Rangers at Ibrox.

As an outsider looking in, I would be surprised if there is any great enthusiasm amongst – for example – the rugby communities of Hawick, Gala, Kelso, Selkirk, Jed-Forest etc to go and support a Borders semi-professional team that was in fact just Melrose RFC playing at the Greenyards.

That’s not to say that the same fans would support a more inclusive district franchise either, but great caution should be exercised before obviously limiting a resource concentration to a product appealing to a single club’s fan base.

Scottish rugby could do well to look at the warfare on Welsh rugby social media and be very careful to avoid the same mistakes.

19 comments on “Agenda 3 and the Super Six – learning the lessons from the past?”