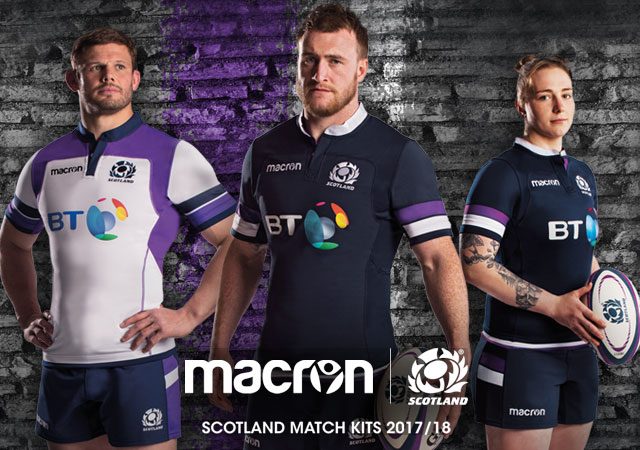 So with the dust now settled on another Scotland Rugby Kit launch by Macron, official kit sponsors of Scottish Rugby until 2021, we thought we’d take a closer look at the shirts and
the fans opinions on them!

The kit was unveiled back on the 10th July and, much like a British & Irish Lions team selection, it completely polarised Scottish Rugby fans.

This year’s shirt features purple flashes not seen since the Cotton Oxford and Canterbury jerseys of the late ninety’s and early 2000’s.

The purple makes a welcome return in our opinion (it brings some colour to the navy-heavy shop floor) however it seems to split opinion on social media along with the collar style (or lack of) and the tartan being dropped completely, a touch that proved a popular addition by Macron on the last two shirt incarnations.

Hopefully the tartan will make a return for the Rugby World Cup in 2019, but if you really miss it there is a training top with some on it.

The shorts will also be navy blue for the coming season, something that always incenses traditionalists who prefer white, “the way its always been!”. However, with the keyboard warriors out in force throughout the launch, we decided we would conduct our own polls on Twitter and Facebook to gauge what the more reclusive social media user thinks.

On Facebook we conducted a 4-hour long live video inviting opinions. As you can see below the shirts were overwhelmingly “liked” but as for “loved” and “hated”: in largely equal measure.

Over on Twitter it proved a more negative place to be, echoing Ed Sheeran’s thoughts on the platform. Here, 41% hate the shirt with only a minority of 15% loving the design. A small majority of 44% still like it though.

Here is the timeline of Macron Scotland shirts so far. Which one is your favourite? Let us know in the comments below.

Macron’s Scotland shirts through the years

Will these opinions effect shirt sales? We doubt it, because Scottish rugby fans are a passionate bunch, and this patriotism usually leads to plenty of new jerseys in the BT Murrayfield stands come game day. The thistle on the chest and the sense of getting behind your team is more than enough justification for a purchase of any rugby shirt in our opinion.

To take a look in person, pop in and see us!