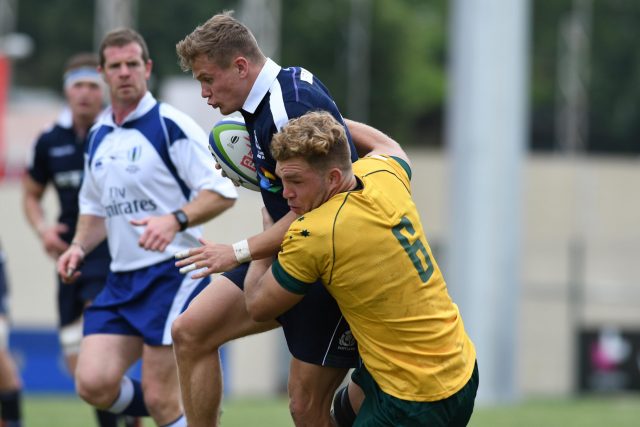 Scotland's Darcy Graham is tackled in their fifth place play-off with Australia at Avchala Stadium on day five of the World Rugby U20 Championship 2017 in Tbilisi, Georgia, on 18 June. Photo: Levan Verdzeuli / World Rugby.

All 12 of the backs in John Dalziel’s squad for the World Rugby u20s Championship saw some game time in Georgia. Among that group though were 7 players who monopolised the starts and minutes played, and it’s those young lads who dominate the statistical analysis of Scotland’s performance across the tournament.

Robbie Nairn (4 starts, 1 sub) was also involved in all 5 fixtures. With Andrew Simmers starting at scrum half in every game bar the opener against New Zealand the same backline turned out for the last 4 matches of the tournament. That familiarity contributed to the backs scoring 13 of the side’s 18 tries (incidentally that total has only been bettered once by Scotland in this tournament – and the 21 tries in 2012 were rather inflated by 9 in one game against Samoa).

Blair Kinghorn got on the ball more than any other back and was productive with it, averaging over 100m of ground gained per game on his own. In fact the lowest figure he managed in any of the matches was 94m against Italy. Even among a back 3 that was breaking tackles for fun The King was the standout – 20 defenders beaten was 5 ahead of Nairn, 8 more than Graham and double Ross McCann’s numbers. The combination between Kinghorn and Scotland’s top try scorer, Graham (with 4) has the potential to be absolutely electric and they both benefited from the U20s ability to move the ball at pace – hopefully Richard Cockerill’s Edinburgh can generate some similar opportunities for them in 2017/18.

There was a fair bit of protection coming from the Scottish back row but even still the 10 / 12 channel of Eastgate and McDowall saw plenty of action. The youngest man in the backs, Stafford took on a tough role, leading the defensive line from midfield after previously featuring at full back in the U20 Six Nations. The experience should serve him well and he will still be young enough to play in next season’s tournament.

The, at times, loose and open nature of the games means that tackle completion stats should be taken with a pinch of salt – but they are a good 15%+ below where these players will need to be to make their way in the pro game. Coaching and drilling defence is much easier than trying to uncover flair with ball in hand or teach a player how to identify a gap though. If these young fellas can bring their attacking A game to the professional setups a lot of the rough edges in their work without the ball can be smoothed off with a bit more of the sort of hard graft they have already shown themselves willing to put in.

Check out this article for some analysis of Scotland’s forwards during the tournament.