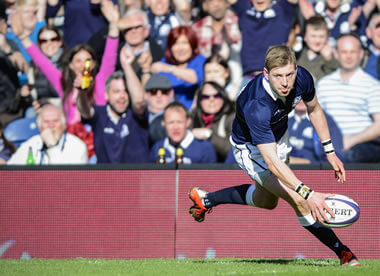 You beauty! Two from two on the summer tour for Gregor Townsend’s men, and a first ever win in Sydney despite Israel Folau doing his best to win the game all by himself. Here is how the Scots went:

Greig Tonks (7) – Stable, solid defence. Not much going forward but kicked a nice long range penalty at the start.

Lee Jones (7) – Great work for Scotland’s 3rd try, but quiet before and after. Scotland didn’t play very wide too often so he had to look for work.

Alex Dunbar (6) – Caught out once in defence, but then part of a huge effort to keep the Australian attack quiet.

Duncan Taylor (9) – This lad is class! Attacked well, composed to set up Watson for the outstanding team try and took an interception of his own to open the try scoring. Undoubtedly back to first choice at centre.

Rory Hughes (6) – chased well but apart from the odd thud he was fairly quiet. Took a knock to the face and was substituted at half time.

Finn Russell (10) – Genius. Controlled well, tackled hard, set the Oz defence and got a very good charge down try, all whilst looking like he was having a hit out at a preseason 3rd XV level game. His attitude typifies everything that is good about this Scotland side and this was his best game for Scotland. Rewarded with a Lions call-up immedidately afterwards and will sit the bench against the Chiefs on Tuesday.

Ali Price (8) – Sharp again from Price, always on the shoulder for support. Keeps the tempo up.

Fraser Brown (6) – Commentators curse! Poor at lineout, quiet in loose, apart from one break which he then gave a silly offload when left without support runners.

Zander Fagerson (7) – Led the defensive effort in his 54 minutes, flying out of the traps to smash the Australians at every opportunity. Scrum started to turn against him in 2nd half just before Nel was introduced.

Ben Toolis (8) – Another good outing from Toolis. Leads the maul defence well and put in a big shift.

Jonny Gray (8) – Lots of ‘pivot’ passes from Gray, and plenty of workrate. Combined well with Toolis

John Barclay (capt) (9) – We say it every time – communication! He managed Wayne Barnes like a pro, even from the bottom of a heap where he’d just been penalised. Add to that some excellent breakdown work and you have a very good captain’s performance.

Hamish Watson (8) – Not much pinball action, but a constant menace against Hooper. Superb support work for his try.

Ryan Wilson (3) – A complete and utter waste of a shirt today. Involved in a scrap after 40 seconds, gave away penalties like Jim Hamilton and got himself binned to boot. Went back to Wilson of old today – real shame for a player who had improved a lot for Glasgow this season.

Ross Ford (7) – Big shift from Ford, lineout stabilised when he came on and I even saw a hook at a scrum (and a potential leg drive). From this I think it really is obvious that Fordy listens to the SRB Podcast. My apology – our second in as many weeks – is being drafted!

Allan Dell (7) – Excellent cameo from Dell who was subsequently called up to the Lions. His breakdown work in the last 10 minutes gave Scotland the platform to win the game.

WP Nel (7) – Still working his way back, tackled and carried well and another 30 minutes of action under his belt. Until he’s back to his peak this looks like a good way round for him and Zander.

Tim Swinson (5) – Did his best to lose the game right at the end. Not the ‘Impact Sub’ I had in mind.

Josh Strauss (7) – Made hard yards with the limited possession Scotland had in the second period. A vast improvement on Wilson at Number 8.

Henry Pyrgos (5) – Slowed the game right down(again). Kicking game was awful and invited Australia back onto us. Doesn’t look suited to Townsend’s gameplan as yet.

Matt Scott (7) – Much better from Scott who got a full half on the park. Attacked the line well and almost got through. Australia did well to stop him.

Note: this morning it was announced Alex Dunbar and Magnus Bradbury will join Allan Dell and Finn Russell in leaving the tour early. Finn and Dell are off to the Lions, while the others have been allowed to “begin their summer break a week early”. Lewis Carmichael has returned to Western Force to complete his loan from Edinburgh.