Scotland’s first series of test matches under incoming Head Coach Gregor Townsend have been confirmed for the summer tour this June.

The national team will face a trio of opponents on consecutive Saturdays, starting with the first tier one international to be played in Singapore against Italy (10 June). This will be followed by Australia in Sydney (17 June) and Fiji in Suva (24 June) which means a fair bit of travelling for the Scotland squad, but there’s nothing like bonding during long-haul flights especially with the missing Lions contingent looking like it will be quite small.

Broadcast details are still to be confirmed but BT Sport is likely, having picked up these games in the past.

Glasgow’s season is all but over following another narrow 10-7 defeat to Munster over the weekend. A Stuart Hogg try aside, Glasgow struggled to break Munster down after they opened the scoring in the 5th minute – Hogg’s try didn’t happen till the 69th in a low scoring affair that puts the Irish province 4 out of 4 against the Warriors this season.

Even with a run in that includes Zebre and Edinburgh, Glasgow currently lie in 6th position which makes European Champions Cup rugby fairly secure but the playoffs agonisingly out of reach as things stand.

Mark Bennett has undergone ACL reconstruction at BMI Ross Hall Hospital in Glasgow and is expected to be out of action for 9-12 months, while Josh Strauss, who sustained an injury to his kidney playing for Scotland against France in February, is “healing well”. He’ll require a further six weeks of non-contact work before he can return to full training which will most likely be with new club Sale Sharks. He could still make the Scotland tour on that timescale though and Bennett’s news is worse for Edinburgh than it is for Glasgow.

Bennett and Strauss will be at Glasgow’s home game against Zebre next Friday night where supporters will get the chance to show their appreciation to them and the other players leaving the club this season. Grayson Hart is another; he’s following Rory Clegg to Ealing Pathfinders.

Glasgow Warriors have finally announced that they’ve signed Adam Hastings on a two-year contract from English Premiership side Bath, but we’ve known that since Todd Blackadder all but announced it ages ago. Hastings has made 12 appearances for the Bath first team, since joining their junior set-up in 2014 and then earning promotion to their Senior Academy in 2015.

Locally grown BT Sport Scottish Rugby Academy players George Horne (scrum-half/standoff and brother of Peter) and Paddy Kelly (centre) have also signed professional contracts with Glasgow Warriors. The pair made their Warriors debuts together earlier this season, both coming off the bench in a home game against the Ospreys and will be on one year deals. Horne and Kelly currently play with Glasgow Hawks and have previously spent time with London Scottish in the English Championship. Both have age-grade caps and while Horne has spent time with the Sevens squad, Kelly has also spent time in France playing for Le Parc in National B.

Another positive note to finish: Finn Russell is apparently still in the hunt for the PRO12 Golden Boot award, sitting in 4th place currently with a percentage of 83.33%, just ahead of former clubmate Duncan Weir.*

Edinburgh suffered another loss again this time to champions Connacht to make it eight defeats in a row, despite three late tries including a penalty try and another from their player of the season Hamish Watson, rapidly assuming a Sergio Parisse-like ability to do things himself in the absence of a cohesive team around him. It finished up 19-22 to the visitors.

To cheer themselves up, Edinburgh Rugby announced the signing of BT Sport Scottish Rugby Academy back-row Ally Miller on a two-year deal, which will see him serve his hometown club until May 2019.

Miller was one of a number of players who moved south to London Scottish as part of Scottish Rugby’s partnership with the Richmond club, making 15 appearances during his tenure in the English Championship. He’ll join up with Jamie Ritchie and Magnus Bradbury as part of a young unit looking for game time. The back row competition has eased slightly with news that Super-15 winning Highlanders captain Nasi Manu will move to Treviso next season having struggled to make the impression that John Hardie did at Edinburgh. No word yet on a new deal – or a move – for Hardie.

When not signing new contracts, Ally Miller was named in the Scotland Sevens squad for this year’s Hong Kong Sevens, which also featured Blair Kinghorn and new captain Hugh Blake.

They won three games on the final day in Hong Kong on their way to lifting the Challenge Trophy following a mixed tournament, where they underperformed on Day One.

After a disappointing pool stage that saw them lose three games, Scotland responded magnificently with wins against Samoa, France and Kenya to pick up some silverware. This can hopefully arrest the minor slump they are in after a bright start to their World Series campaign. 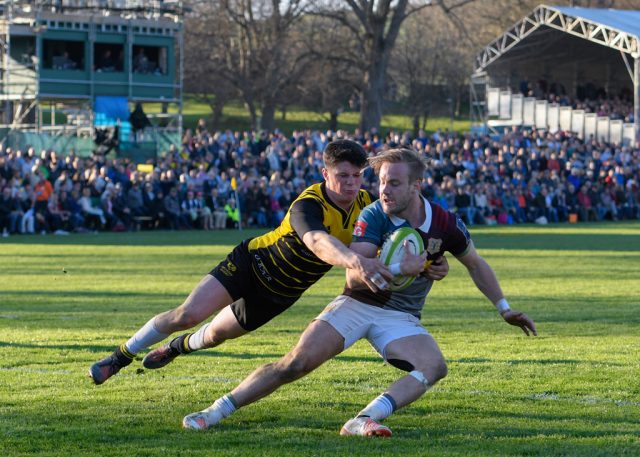 Harlequins vs Melrose in the Final of the The 2017 Melrose 7s at The Greenyards, Melrose. pic © Alastair Ross / Novantae Photography

In the weekend’s other big Sevens down in the Borders, hosts Melrose were unlucky to come up against a determined Harlequins side who ran out winners in a high-quality final. In lovely sunny weather the sides were pretty evenly matched physically, especially after a couple of home-favouring decisions from (Scottish) referee Cammy Rudkin kept the scores close around half time. Following the decisive try in the second half, Harlequins another late try to put a gloss on the scoreline and lift the Ladies Cup, 30 years after they last won it.

Melrose will hope to overcome that disappointment in the BT Premiership final against Ayr back at the Greenyards this Saturday.

Finally, another one to keep an eye on: 20 year old Watsonians scrum half/wing Reiss Cullen has signed a first pro contract with Bristol.

That’s it for now, but we’ll have a word on the retirement of Kelly Brown tomorrow.