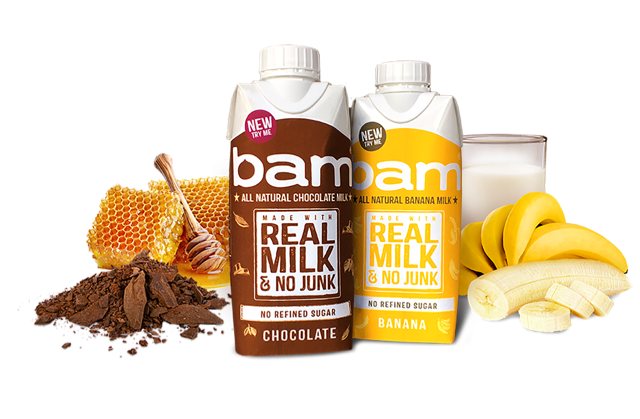 There is an element of the BAM branding that is ‘Lost In Translation’ when it comes to the Scottish market. Shortened from the word Bampot, the Collins English Dictionary has the word Bam defined as “Scottish Slang meaning an idiot or a fool”. As in “That Eddie Jones eh? What a total Bam.” or “What Bam came up with these new eligibility laws?” that kind of thing. In a funny kind of way though, I think this could be a (presumably unintentional) Scottish marketing masterstroke by the English based milk product producers. Time will tell on that one.

In essence, BAM’s unique selling point in a very crowded milk/protein drink market is that their product is the UK’s first ever and only milk drink to be made without using any refined sugar or artificial colours, flavourings and preservatives. Available in either banana or chocolate, they are made using Red Tractor certified British whole milk (as opposed to the more popular semi-skimmed version) and sweetened using only honey and ethically sourced banana or cocoa puree. Available almost solely through Sainsbury’s (Amazon & some small independents too) and retailing at £1.60 for a 330ml bottle they also pack a reasonable 11g punch of protein per unit too.

Some Bams in Action…

So far so good but what do they taste like? Well I started with the banana one and the first thing that was striking was that it actually tastes of real bananas. Banana flavouring that appears in lots of products these days are actually based on a banana that not longer exists called the Gros Michael. These days’ the actual bananas we eat are a strain known at the Cavendish and taste very different to the fake flavouring. Therefore, the BAM banana milk product is quite striking in its actual banana taste. Alongside the honey it provides a really natural taste which is both refreshing and precedes an unusually pleasant, slightly bitter, aftertaste.

The cocoa is similar in that our ‘chocolate’ palette is based on the Cadburys/Nestle high sugar, creamy version and not necessarily that of the actual cocoa beans itself. Once again, the mixture of the natural flavourings alongside the honey is really quite unique and pleasantly bizarre. Both flavours hold quite a creamy texture due to the whole milk but without the thickness of a milkshake which can be quite sickly when you reach the 500ml mark. Fitted with re-sealable tops, my only concern would be that 330ml feels like too small an amount to want to keep and/or re-seal. A litre? Definitely. Half a litre? Maybe. Beer bottle size? Nah, I’ll just finish that. I don’t know if there are plans to make larger units but I think that might be more useful in terms of storage and re-use.

Overall, BAM is a really nice product. Nice understated design, totally natural products and a really tasty and refreshing drink. However, the protein thing is a bit of a marketing misconception (exactly the same as 330ml of whole milk) as there are a bunch of drinks out there that deliver over 20g per unit and they could do with expanding the unit range. That said though, BAM have taken an admirable stance in the milk product market against artificial flavourings and the curse of sugar. It’s a tasty product too and with a name like that, what could possibly go wrong in the Scottish market?