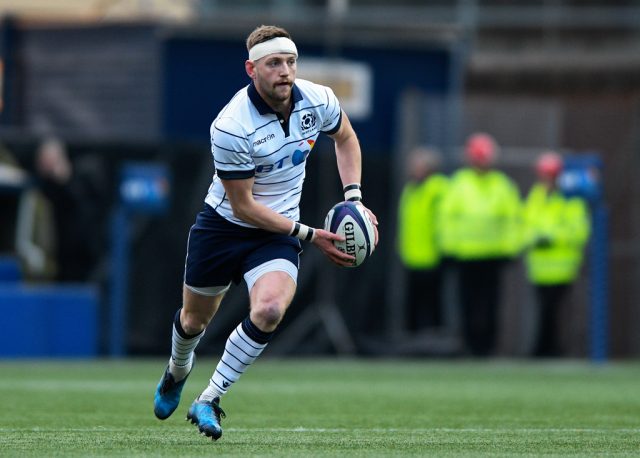 A damp and drizzly Murrayfield was probably not the sort of atmosphere Scotland would have wanted to deploy their preferred brand of attacking rugby, but a sell-out crowd was in sufficient cheer to demand a winning end to the season and a fitting tribute to outgoing coach Vern Cotter.

With handling slippery, the opening passages were characterised by kicking from both sides until Scotland’s pack showed some intent by destroying the first Italian scrum to give Stuart Hogg a shot at the posts; the new father got his game off to a good start by sneaking it over. The next scrum, with Scotland in prime attacking position after Nigel Owens overruled Gauzere’s call, was less successful with the penalty going the way of Italy.

Scotland gave away another moments later for collapsing the maul which highlighted the key Italian threat. In both their big early drives, Ryan Wilson looked even at that stage to be operating below capacity with a shoulder injury. It was no surprise when Italy used the maul again the first time they made the Scottish 22 but the home side managed to hold it well enough to force the Italians wider where they conceded a breakdown penalty.

They couldn’t force the Italians from their half though before Canna was awarded a shot at goal of his own – missed.

Perhaps even last weekend included, Scotland look very confident with the ball every time they enter the opposition half. They don’t always score, but they usually come close.

Huw Jones had a couple of nice darts before Tim Visser narrowly failed to gather a high ball in goal. Jones went off injured at that point after a nice cameo but not how he would have wanted a decent Six Nations to end.

Matt Scott on the other hand was bursting to get on, fine Premiership form finally rewarded. He didn’t have to wait long for  chance, falling on an Ali Price chip that with no small amount of luck ended up at his feet. That was Scotland’s second try, the first coming just after Jones went off.

Scotland had a penalty though and the pack drove it close, John Barclay and Alex Dunbar in particular carrying strongly before Price threaded Finn Russell through the sort of hole he usually puts others into for a try out wide. Russell converted to make it 10-0 with half an hour played.

In that last ten minutes either side of Scott’s try it was the usual procession of penalties, kicking and chasing including another Italy miss. Scotland were kicking better, holding on to the ball and keeping better discipline.

It wasn’t particularly absorbing, but at least Scotland were winning it.

The second half saw the introduction of the sun, hitherto unused in the match and the Scots must have thought they were on holiday such was the casual approach they took in the opening exchanges.

The Italians on the other hand had their maul purring and got the ball within inches of the Scottish line on a couple of occasions, after one they spun it wide only for Stuart Hogg and Scott to hold up Esposito over the line.

Hogg was at it again minutes later, forcing a knock on in the tackle from Padovani which brought a huge roar from the crowd. This one may have been even more vital with John Barclay in the bin for repeated collapsing of the Italian maul. Certainly to send Italy away with no points was encouraging but Scotland couldn’t quite capitalise immediately on Italian indiscpline. Still, with the visitors lineout misfiring Russell and Hogg were content to pepper kicks in behind Italy.

Restored to 15 men by the hour mark, one such kick bore fruit for the Scottish attack.  Hogg chipped over the defence then he and Russell incited panic in the men in blue, before another messy loose ball knocked back into the large scoring areas was slapped down by Tim Visser to cap an industrious afternoon.

As the Mexican waves rolled around Murrayfield it was a curious mix of atmosphere. The game was in the bag and Scotland chasing the bonus point but Scotland weren’t playing quite well enough to avoid boredom for some, with more stoppages especially as players tired. It was perhaps also Finn trying to be too clever at times in the opposition half, when previously simple, direct rugby has served Scotland best.

And so it was that when they put the ball through the hands after several phases of strong carrying, Russell then Hogg gently popped the ball to Seymour who despite a quiet tournament, made his mark on the end of it to seal Scotland’s first Six Nations try bonus point.

When even the Italian maul started faltering, the real chance they wouldn’t score anything probably put their heads down and despite forcing Scotland to defend for the last five minutes this performance will have given Conor O’Shea plenty to think on.

For Scotland, onwards and upwards and real satisfaction at not conceding any points.

Farewell and our heartfelt thanks Vern Cotter.

SRBlog Man of the Match: The sponsors gave it to Finn Russell but for me Hamish Watson was the standout forward in one of those industrious team efforts where few stand out. Out back, Alex Dunbar and Tim Visser also had busy games.