WP Nel will miss this year’s Six Nations, after scans revealed his neck injury to be more serious than first feared.

For a year since his international debut, he has been the cornerstone of Vern Cotter’s pack and was seen by many as a shoe-in to tour with the British and Irish Lions in New Zealand over the summer having scrummaged destructively since the 2015 Rugby World Cup.

That now looks highly unlikely as the 30-year-old Edinburgh prop is forced to sit out the Six Nations. Lions coach Warren Gatland would be forced to take a prop not having played at international level since June 2016 (against Japan) and throw him straight in against hungry Super Rugby teams and potentially the All Blacks. 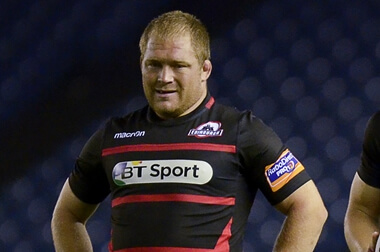 There is little doubt losing Nel is a huge blow ahead of Cotter’s swansong, but Fagerson has given Scotland fans reasons for optimism.

The prop, who celebrated his 21st birthday only this week, performed admirably in the Autumn and was not shown up by a rapidly-improving Wallabies scrum, nor dismantled by the hardened Pumas or Georgian packs, as some had anticipated.

Fagerson has kicked on since then, too – he rarely shirks taking on defences with ball in hand, and the former Strathallan School pupil has added dynamism to his carrying, and improved his work at the breakdown – a ‘jackal’ penalty earned against Cardiff Blues a perfect example of his improving all-round game.

While there are still questions over his scrummaging technique, the 21-year-old has shown sufficient strength in the area to likely hold off Newcastle’s Jon Welsh who was recalled to the squad last week.

In the absence of Peter Wright or even Mr A. Dymock, we turned to our colleague Brodie Smithers, himself a sometime prop, who said: “Like a lot of modern props his strength is built on a foundation of deadlifts and squats as opposed to plain old scrummaging.

“This means he’s very strong when set and square but if his opposite number starts to move him around or puts his body at an angle he’s not comfortable with, he folds. It’ll come, he just needs more hours at the coalface.”

More hours at the coalface are set to come in the Six Nations – Fagerson is almost sure to be in the team to face Ireland – but you can be sure he will be pushed hard for the shirt by Welsh and uncapped Edinburgh prop Simon Berghan in training.

12 comments on “Nel ruled out of Six Nations…but is it all bad news for Scotland?”