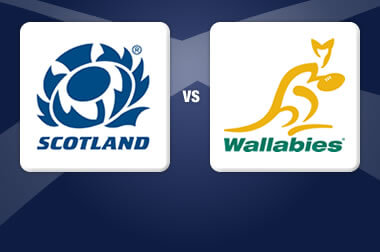 It’s going to be a tussle at the breakdown, this one, as both sides name dual opensides at 6 and 7.

Hamish Watson gets a welcome chance to start following a period of about a year when he’s been Edinburgh’s standout performer (though the rest are now thankfully catching up). As at Edinburgh, last year’s breakout star John Hardie is confined to the bench. Beside Watson, John Barclay continues at openside while there’s no space for Josh Strauss as Ryan Wilson packs down at eight. Is there enough heft there?

Up front it’s a start on debut (day-booo for our Aussie commentating friends) for Allan Dell and a second cap for Zander Fagerson. In between them, 99 cap Ross Ford is set for his century.

In the backs, Tommy Seymour sits this one out for personal reasons so in-form Premiership wingers Visser and Maitland form the strike partnership while Alex Dunbar and Huw Jones are a fairly untried pairing in midfield. There’s no bench spot for Mark Bennett, but both Rory Hughes and Ali Price who were initially only invited to train with the squad rather than called-up proper have made the replacements list.

Brown, Reid and Gilchrist alongside Hardie will have potential for impact late on, while Pete Horne has the Quade Cooper role of late in the game chaos…

Michael Cheika has named a strong team to take the field, although the back division is considerably different to the World Cup ’15 model. Danger men Folau and Kuridrani are present while Foley and Genia are a classy pairing at half-back.

Second rows aside, in the pack it’s a familiar bunch with Stephen Moore once again captaining the side and with the P-ooper axis in place in the back row, the tussle at the breakdown could be epic – but hopefully not utterly one-sided.

22 comments on “Scotland vs Australia: the teams”