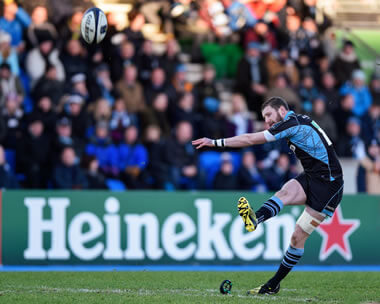 Glasgow welcomed premiership heavyweights Leicester to a sold out Scotstoun on Friday night, with Gregor Townsend calling up some of his own heavy artillery, rested the previous week. Gordon Reid became the latest Warriors centurion, Finn Russell and Henry Prygos returned to the starting 15 and a late change saw Alex Dunbar drop out, meaning Mark Bennett came in at 13 with last week’s stand-out Nick Grigg coming onto the bench.

Glasgow started well, with Russell pinning the visitors into the corners, forcing pressure on Tom Youngs throwing in at hooker. The English international was up to the challenge, with some gutsy long darts to the back of the line allowing Leicester to clear their lines.

The English side had the first chance at points when Fagerson was penalised at a ruck, close to centre on the Glasgow 30m. Owen Williams has been in outstanding form from the tee this season and he made no mistake to make it 3-0 with 8 minutes played.

Matt Toomua was making his Tigers bow and was keen to make an immediate impact. Unfortunately, he decided to do so by hurling Finn Russell into the air in the clearest tip tackle (and red card) you will see all season. Referee Mathieu Raynal disagreed, with the sanction of yellow greeted by a collective howl of derision from the Scotstoun faithful. It was truly a horror tackle, and a more cynical person might argue that Russell was targeted, but the sanction did not match the crime. Mr Tooma may receive a call from the citing officer.

From the resulting penalty Stuart Hogg stepped up all of 55m out. The kick cleared the in goal area and levelled the scores at 3-3.

An emotional Scotstoun was absolutely fizzing and the players were getting caught up in it, with niggle breaking out after almost every stop in play.

Leicester, despite only having 14 on the pitch, managed to get some ball finally and a clever quick penalty caught Ryan Wilson not retreating 10m, despite his pleading. It was a yellow for Wilson but actually it was a team sanction given the 8 penalties Glasgow had conceded in less than 20 minutes. It was almost inevitable that the try would come when a penalty to the corner resulted in a maul. Sure enough Brendan O’Connor was the man to dot down from a trademark Tigers rumble. Williams converted, and the Warriors looked worried.

Oh why did we worry?

After that try, the Glasgow team looked so fired up from 1 to 15, and a searing move up the pitch on 24 minutes allowed Leonardo Sarto the chance to dive over. The latest Italian import is fast becoming a favourite of the Scotstoun crowd, with any comparisons to DTH a sign that he is going in the right direction.

An easy conversion levelled the scores, but four minutes later Scotstoun was on its feet once more.

With possession in the Leicester 22, accuracy of hands under some heavy defending gave Glasgow the ball on the 5 metre line. Fraser Brown attacked the ball like a runaway train and barrelled through three weak Leicester tackles to score. Another conversion success for Russell and the management at the Tigers will have been wondering whether sacking their defensive coach last week was wise.

Glasgow had obviously decided they were going to do things in threes, as on 32 minutes another try arrived. Bit well and truly between their teeth, the power and pace of the Glasgow side were too much for their English counterparts and when Henry Pyrgos sniped over, the crowd could barely believe what they were seeing. Russell missed the tough conversion but 22-10 was a fair reflection of a glorious 15 minutes for the Warriors during which the game seemed all but won.

Williams pulled 3 points back before halftime, and Hogg had another long range effort sail wide, but a half time score of 22-13 would have been taken by every Warriors fan before kick-off. A stat that summed up the worries for Richard Cockerill’s men: 23 carries by Leicester for a cumulative 27 metres.

The second 40 started with Leicester certainly more up for the game. The game had opened up and the Tigers were causing the Warriors defence issues, but they rarely got near Glasgow’s try line.

The Warriors scrum on the other hand was going from strength to strength, with Zander Fagerson in particular looking like he had the upper hand on his highly rated counterparts.

Russell had the first shot at any points, with an easy penalty bringing the score to 25-13. Fagerson then got a just reward for a stellar performance by watching hairy replacement tighthead Logovi’i Mulipola exit to the bin after conceding another scrum penalty in the Tigers 22.

The Glasgow management would have been asking the referee about a potential penalty try at this point but they needn’t have worried; the bonus point was not to elude the home side.

Three more points from Russell’s boot arrived before Mark Bennett took on the Tommy Seymour interception role, snatching a loose pass from Matt Tait. The GB 7s man was never going to be touched, and he dived over to the acclaim of his teammates. Russell converted to make the score 35-13.

With the bonus secure, it became exhibition time. Russell went for a quick tap from his 5m line, shipped it eventually to Sarto who showed excellent pace and awareness to scythe through the tiring Tigers defence. The ball went through the hands of Ryan Wilson who cut a nice line before it ended up with the other wing Rory Hughes, who had been doing a fine Sean Lamont impression in terms of physicality. Hughes was held up just short of the line, with a potential try of the season foiled by solid scramble defence.

If truth be told, the Tigers were long out of the game, but the cherry on top of a very tasty performance came via another interception try.

Sarto basically had the ball thrown directly into his basket by Freddie Burns and the Italian raced home. Another conversion from Russell who had an excellent night with the boot, smiles all round and a record European defeat for the Tigers.

Every single Warrior had the better of his opposite number, in what I would argue is Glasgow’s finest performance in the club’s history.

SRBlog Man of the Match: Choose anyone in the Glasgow starting 15 and you wouldn’t be far off, but Leonardo Sarto got the sponsors award. I am going to plump however for Zander Fagerson, who with the support of his brains trust destroyed a Tigers scrum that was expected to have the upper hand. He had a barnstormer in the loose as well and probably wouldn’t have butchered the sitter that Gordy Reid did right in front of him. Other mentions go to Finn Russell, who is really back to his swaggering best, and Josh Strauss, who had his most productive day in a long time.