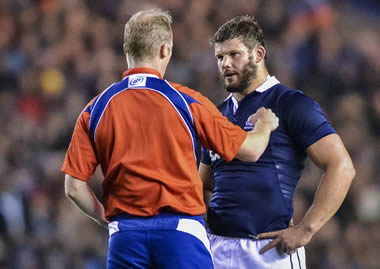 In the wake of violent clashes between fans and police at Euro 2016, social media has been awash with unbearable self-righteous statements about the superiority of rugby over its round ball parent. Leading the charge was the generally well meaning lover of half-and-half scarves @#rugbyunited:

Can anyone at @rugbyworldcup confirm if teargas has EVER been used with #rugby fans? #justsaying #rugbyunited #EURO2016

I’m not buying the fact it’s alcohol fuelling misbehaviour at #EURO2016 , I’ve had many a beer at the rugby and not rioted. #rugbyunited

Does anyone know why it is that Rugby fans seem to go to a match,have fun, then go home without hitting someone over the head with a chair

The problem with this type of generalised comparison between the two sports is that it ignores a whole multitude of factors not least the comparable size of each sport and their respective socio-economic backgrounds. The end result is not what the writers of such drivel ultimately want: which is to turn traditional football fans onto the supposed family-friendly nature of rugby. The end result is that it puts football fans off rugby and reinforces the stereotype that rugby fans are upper class idiots in Range Rovers trying to lecture the huddled masses about how to behave.

Highlighting the differing socio-economic backgrounds of each sport is not this writers way of saying that football is a working class sport and working class people are more prone to outbursts of violence. In large parts of Wales and Scotland rugby has always been a working class sport as has rugby league in Northern England. The differing socio-economic backgrounds of each sport, particularly in England, means that rugby has historically had a free pass in terms of its wider issues as the establishment have closer links to the game and are therefore blinded to its problems. It is difficult to imagine footballers getting away with something akin to the “99-call” of the ’74 Lions Tour, however despite the sickening violence it’s still lauded as one of rugby’s greatest moments.

As recently as 2011, former England hooker Brian Moore fronted a DVD called “Pitbull’s Punch Ups” which promised to “a collection of over thirty rugby fights and punch ups from around the world [including] the Argentinian Mendez knocking out England’s Paul Ackford.” It’s currently available on Youtube and despite Moore’s opening monologue stating it is intended to be “tongue in cheek” it’s incredibly difficult viewing, particularly the opening clip of a clearly concussed Ackford being helped from the field. “Mind not a bad punch for 18” laughs Moore.

The idea that rugby is a thug’s game played by gentlemen is a lie continually peddled by fans and figures within the game to explain away acts of violence on the pitch. When Duncan Ferguson headbutted John McStay in 1994 he was sent down for a 44 day spell at Barlinnie Prison. When Manu Tuilagi assaulted Chris Ashton in 2011 it resulted in a yellow card later extended to a five week ban. To this writers knowledge the Police have never considered taking action against a rugby player due to on field incident and yet in 2005 Kieron Dyer and Lee Bowyer were investigated by police after fighting one another on the pitch during a match.

There is a clear disparity in the way rugby is treated by the authorities compared to football. Rugby has been able to avoid the same level of public scrutiny as football because of this and acts of violence continue to be laughed away as a bit of a dust up. The truth is there is no place in rugby for this type of behaviour any more than there is in any other contact sport – including football. It’s only a matter of time before a player is seriously injured or worse as a result of foul play. Rugby is ill-prepared to defend itself and the long standing protection of the establishment and authorities can only go so far in the age of social media outrage.

And the scrutiny is coming. There is already pressure from a vocal and well organised minority about children playing rugby. Whilst most within the game would disagree with what’s being said, the proponents of this argument are increasingly able to get themselves heard within the mainstream media despite their questionable credentials. And it’s hard to defend a game where adults send children onto the pitch despite being concussed. Concussion is an issue being tackled within the game but it’s hard to claim the moral high ground over another sport when children have died on the rugby pitch due to the neglect of their elders.

Away from the pitch is no different. It is a minority of football fans that cause problems and rugby cannot claim to be free of these problems. The difference is that violent football fans make the front pages because football is the more popular sport whereas reports of violent rugby fans tend to be buried deeper within the pages of the national press if they are covered at all.

Twickenham residents have long complained about fan behaviour on match days and in 2015 there were reports of widespread problems in Cardiff following Wales versus England in the Six Nations. Incidents included bottles being thrown from the top tier of the stadium and reports of fighting amongst fans. As recently as April this year, a match in France was halted due to a mass brawl between fans and players.

Football has its problems on and off the pitch and so does rugby. Neither has the moral high ground but both can learn a lot from each other. Instead of making divisive comments both should be looking to each other for learning points that will allow each sport to grow and develop. Most rugby fans are football fans too but the same cannot be said for most football fans. The only way to change that is to drop the superior attitude many within the game display towards our round ball parent. It’s the only way the game of rugby will grow.