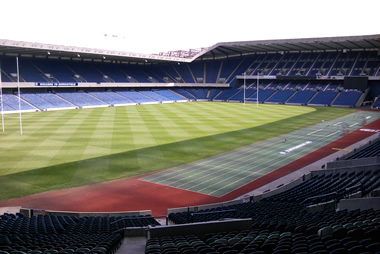 News circulating at the weekend has been officially endorsed today with the announcement that Edinburgh Rugby has formed a partnership with George Watson’s College to play fixtures at its Myreside ground next season, the home of Watsonians RFC.

We’ve been banging on about the dearth of atmosphere at BT Murrayfield for Edinburgh games for almost as long as the site has been running, so progress on this front is good news. Since Jonny Petrie took over as Managing Director, the capital club have been actively looking for a suitable home ground while currently playing matches at BT Murrayfield which is a boon for the SRU in keeping costs down, but not for Edinburgh fans who want what Glasgow have at Scotstoun (apart from the pitch).

Edinburgh will play home matches at Myreside from January to May 2017, with an intention to play the full 2017/18 season at the ground if the experiment is a success. The ground has previously hosted Edinburgh Rugby matches, most recently during the 2015 RBS 6 Nations when a home fixture against Ospreys was played there. George Watson’s College is itself developing plans to broaden its sporting provision and invited Edinburgh Rugby to be part of the project.

Jonny Petrie, Managing Director of Edinburgh Rugby said: “This is a hugely positive step for Edinburgh Rugby and we are delighted at the opportunity to play our home matches at Myreside.

“This is about building a strong future for the club at a home ground in the city that better suits our needs and improves the matchday experience for fans and players alike.

“I’d like to thank George Watson’s College for proposing the idea and for their support in working with us to develop the concept into a credible plan.

“We will now be liaising closely with all relevant parties to ensure a smooth transition over the coming months.”

Melvyn Roffe, Principal of George Watson’s College said: “We are excited about the potential for this partnership to build on our rugby heritage and achievements and to enable the School to have a positive impact in the wider Edinburgh community. The School’s plans for the campus will shortly be finalised and the partnership with Edinburgh Rugby will help us to achieve our aspirations.”

How it goes over will be seen next season. There is no doubt that a smaller ground with the capacity for growth is required for Edinburgh to emulate Glasgow’s off pitch success, but question marks remain over Myreside’s accessibility (parking in particular was often raised on Twitter) and facilities as they stand currently. Edinburgh Accies Raeburn Place re-development is also a potential venue but were Edinburgh to land there it might be seen as jumping in after the hard work of developing the facilities has been done.

Still, a move in any direction is progress and the experiment should have plenty of time to find its feet.