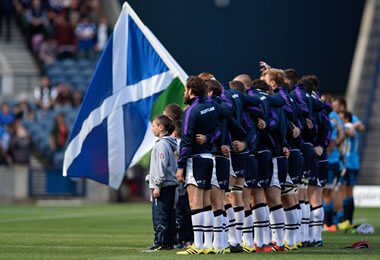 Scotland line up for the anthems - pic © Al Ross

Despite some media coverage and endorsement from the SRU through a post on their Facebook page the idea never really took off save for a couple of pockets of fans having a crack at “Loch Lomond”.

Earlier this year we put a call out on Twitter for some ideas to add to the currently wafer thin Great Scottish Rugby Songbook.

Animation genius Graham Love came up with a song about Josh Strauss to the tune of Madness’s “Our House” that can’t be repeated here.

The key to getting any new chant or going is having a group of fans sat together getting the singing going. Unfortunately this writer is going to the Calcutta Cup with two Englishmen so the chances of getting a pro-Scottish chant going are slim. However as I sorted out their tickets I’ve banned them from even mentioning chariots.

So this is a call to any group of fans travelling to Murrayfield for the Six Nations. It’s up to you to try and get some new chants and songs going. Practice on the bus and train and then sing your hearts out when you get to the stadium. Hopefully it’ll catch on.

The key to any chant or song is to keep it simple and instantly recognisable. The chorus to “Loch Lomond” has long been a staple at Scotland football matches as well as “Doe-A-Deer” for reasons no-one can quite fathom. Suggestions are welcome in the comments below but bear in mind that we want kids to join in so please keep it clean.

The best chant this writer heard was during the Rugby League World Cup quarter final between New Zealand and Scotland. Scotland crossed the line for their only try late in the game much to the delight of the small pocket of kilted Scots who began singing “we only score when we want to”. Hopefully such a chant won’t be necessary next Saturday!