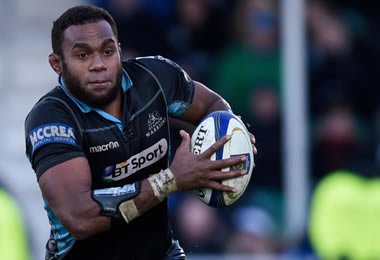 Glasgow travelled to Franklin Gardens with almost everyone expecting Northampton to ‘maul’ them – literally.

The Glasgow pack knew this but when a team as good at the rolling phalanx as the Saints get going, there is not much that can be done to stop it legally. Glasgow, however, had the first shot at points, with Stuart Hogg stepping up from 50m. His connection was poor and the kick slid wide.

Northampton responded to this with a Hanrahan penalty kicked to touch, 5m out. The maul formed and the Saints rumbled towards the line. Glasgow managed to stop the initial drive but failed to defend the edges of the ensuing breakdown, with the No.8 Harrison sniping for a short range try. JJ Hanrahan added the 2 extras.

Glasgow seemed a more enthusiastic outfit than in previous weeks, and good work by Leone Nakarawa gave Finn Russell an easy 3 point chance. The Scotland 10 hooked the ball right to left, missing. Glasgow were playing most of the rugby, but the usual cry of ‘accuracy’ got a number of outings from the Anderson household. Finally the men in white got on the scoreboard, after a sizzling move involving a lovely delayed pass from Russell to the effective Sam Johnson, making his first start. The Aussie scythed through the Saints defence, finding Hogg in support. The full back was well shackled by former Scotland U19 Lee Dickson but referee Poite gave the Scotstoun men the penalty. This time Finn found his range, making it 7-3 Saints.

Hogg seemed to be at the centre of most of what Glasgow were trying to achieve, and a standard challenge for his own Garry Owen resulted in a very concerning head knock for Northampton wing Tom Collins. Collins exited the game after a lengthy delay, replaced by Harry Mallinder, son of Saints head coach Jim. The youngster was called into immediate action with a few bombs going his way but he seemed to settle well into his role.

Some decent set piece work from Glasgow’s scrum saw a chance to give that ‘maul’ stuff a go themselves. They secured the ball, went nowhere and then proceeded to knock on, with the line at their mercy. Glasgow of last year would have scored this 99.9% of the time but this year’s model continues to splutter and stall at the high pressure moments.

On the plus side Ali Price was having a sensational game for the Scotstoun team, zipping the ball well, kicking accurately and controlling the direction of play. This youngster has a bright future in the game based on his performances these last few weeks.

The next points were to be taken by Glasgow, another simple Russell penalty giving another 3 points. JJ Hanrahan was having a poor game, but was getting plenty of practice kicking to the corner. A scrum penalty on 38mins gave the Saints a last shot to maul Glasgow before halftime. This time it was well defended by Glasgow, and when Saints were told to use it, the ball was intercepted by Russell. The 10 done well to get down to halfway before being hauled down, and that was that.

Glasgow started the second period well, keeping the ball in hand and looking more like the team of old. Alex Dunbar, making his return from another niggling injury, was having a belter of a game in defence, and secured his second turnover of the evening to give Russell a chance to nudge Glasgow ahead. The young fly half missed this one, but was soon after given a much easier kick, 20m out straight on. No mistakes from this one and 9-7 Glasgow which was thoroughly deserved.

After 50mins I was beginning to finally believe that my ‘Glasgow fail to defend rolling maul’ article template would be redundant. Alas this was not to be the case. A debatable knock on from Russell deep in the Glasgow 22 started the issue, the kick to corner from a technical penalty straight after was true. The maul formed, rolled, rumbled and crossed the line. JJ Hanrahan missed the conversion then was hooked for Stephen Myler, completing a miserable night for the young Irish 10.

Young Zander Fagerson arrived on 53 mins, and promptly destroyed Waller in the scrum. I was critical of Fagerson’s scrummage earlier in the season but the big lad is looking really tight now and must be close to a Scotland squad call tomorrow. The resulting penalty was no problem for Russell, 12-12 with just over 20mins to play.

Saints had a big opportunity soon after, camping out of the Glasgow line. The Scots defended brilliantly and held their discipline to repeal the saints but the English just kept coming. Another kick to the corner 5m out gave them another maul chance. This one was overthrown, completing a passage of play where the Saints accuracy was lacking.

Fagerson made a big difference when he came on, tackling well and carrying hard but his scrum work was a highlight. Another big shunt gave Hogg another chance at a 50m hoof. This time, for what feels like the first time in eternity, Hogg was accurate with the long kick, splitting the uprights. 15-12 Glasgow with 10mins to play.

Now this wouldn’t be Glasgow this season without stupidity from someone. This week’s villain is Tim Swinson, who lasted all of 8 minutes before seeing fit to punch a Northampton player during a maul right in front of the assistant referee. This sort of action is really being clamped down on by World Rugby and it does take a special type of idiot to think they would get away with it in today’s game with cameras everywhere. Swinson was given a yellow, ruling him out of the remainder of the game.

Even a man down, Glasgow looked comfortable in set defence, but the penalty count was rising and with advantage available, Myler put up a speculative cross field bomb which saw North competing against Russell. The Glasgow 10 competed well but the Welsh giant knocked the ball down to the on rushing support player – none other than young Mallinder. The try was scored, Myler kicked the extras, the fulltime whistle was blown and Glasgow were out of Europe yet again.

There was no great shame in this performance, and a great deal of heart will have been taken from the way Glasgow outplayed their supposedly illustrious opponents for periods of the game. There is always next year…

SRBlog Man of the Match – Hogg, Russell, Dunbar, Johnny Gray and Zander Fagerson all deserve a mention, and on any other day could have been MotM. The main man for Glasgow was however Ali Price. The young scrum half is taking his chance in the team and at this point could be an outside shot for the 3rd scrum half berth in the 6 Nations squad or at the very least hoping to hold down his starting spot come the Six Nations.