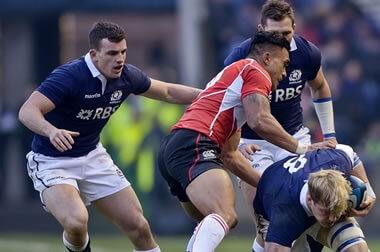 The shared history of Scotland and Japan is not particularly notable. A Scot introduced the first steam train to Japan and Billy Connolly played an Irishman in the Tom Cruise film “The Last Samurai”. The history of Scotland versus Japan rugby matches is not particularly comprehensive either. The teams have met each other in full internationals four times since 1991 with two of those matches coming in World Cups.

Scotland have never underestimated the threat posed by the Brave Blossoms. Before every match the talk has been of improvements made in Japanese rugby and their attacking threat. However Scotland’s victories have always seemed comprehensive. At least on paper.

Scotland met Japan in the Pool Stages of the second World Cup. The tournament was hosted jointly by the then Five Nations meaning Scotland played all their Pool games at Murrayfield.

The Pools were numbered rather than lettered back in 1991 and Scotland found themselves in Pool 2 along with Ireland, Japan and Zimbabwe. As with 2015 Scotland’s opening match was against the Brave Blossoms.

An uncapped Scotland side had been beaten 28 – 24 by Japan in Tokyo in 1989 although nine Scots were missing due to being on tour with the Lions in Australia. This was back in the day when Scotland actually made a real contribution to the combined touring side. The Japanese were not to be underestimated and despite running out 47 – 9 winners the Japanese more than held their own in the early exchanges putting the Scottish scrum under some pressure.

Scotland went on to top the Pool and finished the tournament in fourth position following a narrow defeat to England in the semi-finals and a 13-6 defeat to the All Blacks in the third place play-off.

Another World Cup and again Scotland find themselves in the second Pool (now known as Pool B) with Japan. Again Scotland face the Brave Blossoms in their opening match at the magnificently named Dairy Famers Stadium in Townsville, Australia.

The final score may seem comprehensive on paper but the game itself was anything but straightforward for Scotland. Japan were the better side throughout much of the first half and came within four points of Scotland with half an hour remaining on the clock. However three quick tries from Christ Paterson, Simon Taylor and Simon Danielli put the Scots out of reach in the closing stages of the match. Reports from the time say only Paterson, Taylor and Jason White emerged from the match with any shred of dignity. Try scored Hirotoki Onozawa continued playing for Japan until 2013 and remains involved with the squad mentoring younger players.

Scotland went on to finish second to France in the Pool which also featured the USA. Scotland only scraped into the Quarter finals after a 22-20 victory over Fiji in the final match of the Pool and were dumped out of the tournament in a 33-16 defeat to hosts Australia.

Following their humbling during the previous year Scotland hosted Japan during the 2003 Autumn Tests. As is usual with Scotland’s meetings with second tier nations the game took place away from Murrayfield at McDiarmid Park. Matt Williams time in charge of Scotland is not remembered fondly by many fans. However he can claim to have presided over Scotland’s record win.

Once again the score line does not tell the whole story. The Japan that toured Europe in 2004 was not the same as the team that had given Scotland a scare the previous year. Following the departure of coach Shogo Mukai after the World Cup, Japan tried to appoint Eddie Jones however he turned them down. Japan turned to Mitsutake Hagimoto instead. Hagimoto who went about implementing a policy of not selecting foreign born players following criticism of the make-up of the team at the previous world cup.

This backfired spectacularly and a number of key players were overlooked and others not given permission to travel. It was a disorganised and demoralised Japan that turned up in Scotland and that, more than anything contributed to the heavy defeat.

Christ Paterson ended the match with 40 points to his name just four short of Gavin Hastings record of 44 points in a single match in Scotland’s 89-0 victory over the Ivory Coast at the 1995 World Cup. A young Sean Lamont got in on the scoring, although he also butchered a chance with the line begging. However, Scotland being Scotland they still conceded a try. In contrast Wales beat Japan 98-0 a few weeks later.

The whole match is available on Youtube. Could be worth switching over if things don’t go well on Wednesday.

Scotland’s most recent meeting with Japan took place at Murrayfield with the sides aware that they would be meeting in the Pool stages of the World Cup.

Andy Robinson had been dismissed the previous Autumn and Scott Johnson had begun the process of blooding new players in advance of Big Vern’s arrival the following summer. Only 14 of Scotland’s matchday 23 have gone on to make the World Cup squad showing just how much change the national side has seen in the past two years.

Japan arrived in Scotland off the back of a heavy defeat to the All Blacks albeit a defeat where they caused New Zealand significant problems in the scrum. Eddie Jones was now in charge and targeting wins against the likes of Scotland and Wales. Japan had already beaten Wales in the Summer (although most of the first choice Welsh squad were away on Lions duty) and so this was seen as a real opportunity to force their way into the top 8 of the World Rugby rankings.

At the time Scott Johnson said a number of players were on a warning and failure to perform would see them dropped from the squad and unlikely to make the World Cup. This writer predicted curtains for Nick De Luca, Al Kellock, Ross Ford, David Denton and Euan Murray. Three out of five isn’t bad.

Once again the score line flattered Scotland with Japan a constant threat with ball in hand. You can read out match report here. Tim Swinson was the official man of the match after a great physical performance whilst we opted for Matt Scott. It’s worth noting that four out of the five try scorers for Scotland have made the starting line up for the upcoming game.

Notwithstanding the result at the weekend the lesson we can take from the analysis of Scotland’s previous meetings with Japan is that they should not be taken lightly. Aside from 2004 Scotland have never had it easy and even when they put 100 points passed the Brave Blossoms they still managed to concede a try.

South Africa may have named an experienced squad to face Japan but the overall impression is that they simply failed to prepare, perhaps expecting an easy first outing. Scotland, by contrast, have always taken Japan seriously. However that is perhaps down to Scotland’s propensity to capitulate in the face of teams they should beat.

Whatever the final result on Wednesday we’re in for a rough ride. Best have a cushion to hand to hide behind when things get tense.