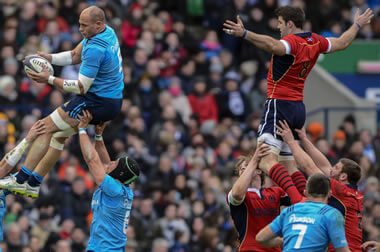 Watching Johnnie Beattie these days fills me with a sad sense of longing of what may have been. I watched a 5 minute long tribute video to him this morning, perhaps a sign I need to get out more, and seeing him burst his way through tackle after tackle, making bone shuddering hits and throwing deft passes like some sort of navy-blue-clad Sonny Bill Williams was just a joy to behold.

The video ended with that beautiful try from the 2010 6 Nations against Ireland, a 30 yard burst full of power, speed and aggression where Paul O’Connell and Gordon D’Arcy (among one or two others) were sent bouncing to the floor. It was one of the great tries of that tournament and had many journalists, pundits and fans declaring Beattie a star.

Going into this tournament it looked like Beattie’s international career was over – or at least on the line. David Denton was named as the only specialist 8 in the original squad with Vern Cotter’s first choice from the autumn, Adam Ashe, on the treatment table, leaving the (then) 35 cap Beattie out. An injury to Denton shortly after the squad announcement paved the way for Beattie to come back into the fold and sadly, despite all the talk of proving coaches wrong and showing he’s worth his place, it hasn’t gone to plan.

After starting the first 3 games of the tournament, Beattie dropped to the bench for the England game with the returning Denton taking his place and Ashe accompanying him there. Ashe, not Beattie, replaced Denton mid-way through the second half with Beattie coming on for Rob Harley at blindside with 15 minutes remaining.

Beattie isn’t the only one who hasn’t lived up to expectations in the dark blue this tournament of course, but at 29 he’s now one of the more senior members of the squad and he’s fast becoming a luxury in a position that arguably more than any other requires defensive solidity with attacking panache…and the stats back this up:

Vunipola and Parisse have also both scored a try a piece thus far and Faletau was instrumental in Rhys Webb’s try against England, providing the pass that allowed the scrum half to score in the corner. As for Beattie? Well, aside from being taken out mid-air by Jonathan Davies and being yellow carded in the France game, it’s difficult to remember anything of note. The non-existence of clean breaks or defenders beaten is a damning indictment of a player who has the ability to pose a running threat and yet has drawn more attention for disciplinary situations.

We know by now the type of rugby Vern Cotter wants this team to play – the oxymoronic “Organised Chaos” – but for this to be effective we need a hard running, ball carrying 8 to punch holes in the opposition defence and provide an attacking impetus. Beattie has utterly failed to deliver on this front and has been anonymous when required.

Since making his try scoring debut against Romania in 2006 Beattie has played alongside a series of talented backrowers – Jason White, Simon Taylor, Ally Hogg, Ross Rennie and a host of others but his most effective spell in a Scotland jersey came in 2010 as part of the infamous “Killer B” trio. The then trinity of Glasgow Warriors Kelly Brown, John Barclay and Beattie showed the rugby world what a complimentary, well-oiled back row could potentially do and were on the verge of ushering in a new era of back row play for Scotland. With Barclay acting as the traditional open-side fetcher, snaffling loose balls off the deck, Brown throwing himself in to tackles and making the hard yards and Beattie there to produce the galloping runs, that long stride eating up the ground drawing in defenders before producing deft flicks out of tackles to bring the backline into play.

If you want a slap in the face and a case of “what could have been”, Google “Killer B’s” and a host of articles come up eulogizing the unit. And yet, despite the successful 2010 Argentinian tour, the 3 only started together sporadically over the intervening years. With the continual non-selection of Brown and Barclay set to continue, it’s doubtful we’ll see the three play together again.

At club level, a fruitful two seasons at Montpellier appeared to have energised him but a move to Castres has proved the wrong choice. With the midi-Pyrenees’ outfit languishing at the bottom of the Top 14 Beattie has been criticised in the local media as, you guessed it, a luxury player, and has himself expressed concerns about his form.

But back to the international scene – what was it about playing with the other Bees that brought out the best in him? In Blair Cowan, Scotland have a traditional 7 allied to strong handling and running skills but perhaps the absence of a physical presence at blind side places too much pressure on Beattie to use his evident strength doing the dirty work he clearly doesn’t enjoy.  You have to wonder whether placing the likes of Sean O’Brien or James Haskell next to him would provide him with the freedom to do what he does best. Or maybe, we just need to be realistic and say we all expected too much of him when he first came onto the scene. It could simply be a case that a player as explosive, dynamic and exciting as he looked back then can’t sustain that level over a prolonged period of time.

I’ve been left pondering why Beattie has looked so out of sorts. Against Argentina in the autumn (now the bench mark of Cotter’s short reign) Ashe played the typical 8 we’ve needed this tournament. He was full of barnstorming runs, big hits and fitted into the new look back row effortlessly and bellied his tender years. The system hasn’t changed and the personnel isn’t vastly different – with one or two noticeable absentees of course – and in terms of physical stature, Beattie and Ashe are pretty much the same (6 ft 4 in, approx 106 kg). Denton on Saturday, whilst far from perfect (one or two wild passes stick out), gave us the sort of bullying physicality and determination to move forward we’ve not seen from that position in this tournament.

The only conclusion I can draw thus far is that Beattie – again along with others – seems to be lacking the necessary confidence and aggression required. Look at any of the other 8’s listed above and all of them have attacked the line with power and made a succession of hard clear outs at rucks. It may be harsh to single out Beattie in such a fashion when others haven’t lived up to expectations this year, but in top flight rugby it’s simply unrealistic to expect a team to carry a player who’s overall contribution has been so low. Compare this with Jonny Gray. He also made his way into the team thanks to injuries and yet hasn’t looked back. Every ruck he’s hit, every carry he’s attempted and every, of the many, many, tackles he’s launched himself into have all been executed with such a degree of confidence and aggression that it makes you think he’s the one who has been playing international rugby for a decade.

Going forward, no pun intended, it’s difficult to see where Beattie fits in. With Glasgow’s Josh Strauss on the verge of qualifying for Scotland as a ball-carrying 8 who rarely fails to make ground, Adam Ashe fit again and Dave Denton impressing in defeat on Saturday, we have further back row options to utilise for the World Cup – Roddy Grant and Chris Fusaro also spring to mind. It would be foolhardy to try and potentially change the system for a player who simply hasn’t been good enough .

Saturdays’ game against Ireland will be the day after the fifth anniversary of Beattie’s last international try – that beauty against the boys in green. The romantic in me thinks Beattie will do it again against them. The realist in me thinks he may not even be in the match day squad.

42 comments on “The Beattie Identity”