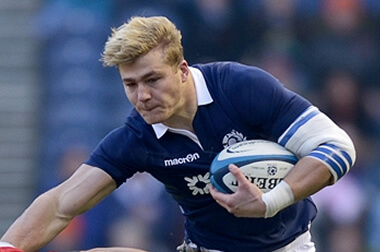 Scotland make 5 changes for Calcutta Cup match on Saturday with Dougie Fife, Matt Scott, David Denton all making their first starts of this year’s competition and Finn Russell coming straight back in after his suspension. This will also be Denton’s first appearance in the dark blue since 2014 after he injured a calf back in January whilst playing for Edinburgh and takes Johnnie Beattie’s place at 8.

Alex Dunbar unfortunately pulled up with a knee injury sustained in training on Thursday morning and no further information has been released as yet, but the more than able Scott steps into the void left by him after scoring twice in Edinburgh’s victory over Treviso. Greig Tonks fills Scott’s place on the bench as well as providing fly-half cover.

Jim Hamilton comes back in to the 2nd row alongside the ever impressing Jonny Gray. Vern Cotter said on Hamilton;  “Jim comes in and will bring his physicality and understanding of English rugby to our forward pack..”

Cotter also added: “This is a very important game.

It will be played away from home at a very intense level and will allow us to assess further our ability to operate away from home in a hostile environment.

“Our focus, however, has been on ourselves and how we can perform better, by identifying the areas that we can control – like improving our skill-sets and reinforcing our cohesion – to withstand the difficult times and also apply some pressure.”

Special praise should also be given to Euan Murray who will equal the record cap total (65) for a Scottish prop, held previously by Allan Jacobsen.

Finally, in among the substitutes there’s been an increase in the number of forwards listed. Vern Cotter has opted for 6 forwards and 2 backs with both Johnnie Beattie and Adam Ashe providing back row cover. Does this perhaps signal where the coaching team think the key battle grounds will be?