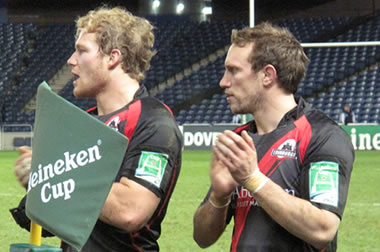 News of Ross Rennie’s self-imposed retirement will be met with great sadness by the majority of Scotland Rugby fans. I think most people recognise that a fully in-form Ross Rennie was as close to being a true world-class, pure-bred openside flanker.

Many superlatives and clichés have been used to describe his playing style. A ‘fetcher’, a breakdown ‘expert’, a thorn in the opposition’s backside…indeed Andy Robinson described him as a “one of the best openside flankers in the Northern Hemisphere” in The Scotsman today. These types of description are, of course, born from frequent displays of courage and rugby intelligence for Edinburgh Rugby, Bristol RFC (latterly) as well as the national team for whom he debuted in 2008.

I’m sure Brian O’Driscoll will remember being flipped up into the air at Croke Park by the young Scottish substitute that day as Rennie perfectly demonstrated his borderline reckless approach to the game. Unfortunately the day was also to be marked by a knee injury which nearly killed his career there and then. Fighting back from it he eventually returned to play for both Edinburgh and Scotland. Recent times saw the fickle winds of change alter against him and a combination of Alan Solomons and Vern Cotter was enough to make it obvious that his future lay away from Murrayfield.

His old mentor Andy Robinson still held faith and that was repaid with seven tries in sixteen appearances for Bristol Rugby over the past season and a half. Sadly though, a neck injury has put paid to the rugby career of one of the most promising (yet ultimately unfulfilled) talents we have produced in the past ten years or so. Much like other smaller, talented and combative flankers (Donnie MacFadyn springs to mind) Ross Rennie’s body couldn’t cope with the rigours he demanded of it on the field.

On a personal note, I don’t know Ross Rennie very well but we were clubmates at Stewarts Melville FP RFC under the late, great Grant McKenzie (who I know had a big influence on his career). What I do remember of Ross Rennie as a club player was that he was a shy, softly spoken, likeable guy at training and around the club. Very much a youngster then and just fresh from having given up a promising skiing career he was talented and physically capable enough to exude instant respect from the senior players. Much like I imagine Jonny Wilkinson was to train with he set standards and raised intensity just by operating at his level. He was also a revelation on the pitch too and it wasn’t long before Edinburgh Rugby came calling.

Whatever Ross Rennie does from this point onwards I’m sure he will be successful. He’s that type of guy. Best of luck for the future Ross and thank you, on behalf of Scottish fans, for your dedication and performances for Scotland.

4 comments on “Ross Rennie: Thank you and Goodbye”