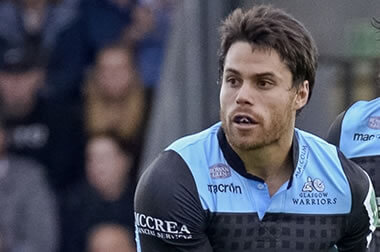 European Rugby Champions Cup Round 6, and Glasgow found themselves with the unenvied task of having to win at The Rec to – depending on other results – qualify for European quarter finals for the first time in club history.  But as Bath were in a similar boat needing a win to progress, it promised to be fast and furious with two clubs that boast international-class back lines and play adventurous rugby.  One slight crimp for Glasgow was that back row injuries meant Fraser Brown, Leone Nakarawa and Richie Vernon started with Sean Lamont on the bench as back row cover; a reversal of fortunes from the round 1 match where Bath had back row woes.

After putting the ball out on the full off the kick off then conceding a penalty from the resultant scrum, Glasgow defended positively and after a couple of strong runs from Maitland and DTH Van Der Merwe, Dunbar was in for the first try of the game within 5 minutes.

When either side had possession in the first half they were both keen for quick ball but minor errors meant lots of set pieces. While Glasgow struggled in the scrum, Bath were having problems with their line-out. Although generally solid in defence, a number of penalties were conceded by Glasgow allowing George Ford shots at goal. After missing his first one, he nailed the next two.

Glasgow started the second half with two replacement props in Jon Welsh and Jerry Yanuyanutawa on for Cusack and Reid, who were put to the test almost immediately and although they were penalised too by referee Lacey, at least former Bath player and pundit David Flatman felt it should have been theirs.

A counter attack from their own 22 went through many hands and good support work allowing Vernon to score a great try in the corner. After a brief conversation between Lacey and the TMO – with Lacey leaning towards awarding Bath a penalty in back play – the try was awarded. Russell missed the conversion.

Bath immediately struck back with a penalty try resulting from Al Kellock being adjudged to have pulled down a rolling maul heading for the try line. Kellock was also shown a yellow card.

A topsy turvy game continued after Glasgow were awarded a scrum penalty that Russell duly converted to re-take the lead. Anthony Watson made a break for the line but was held up by Russell and Maitland to be denied a score. However from the resulting scrum Lacey awarded Bath a second penalty try.

With 10 minutes to go and 5 points down the gamble button that is Niko was pushed by the Glasgow management.  He did what we all expect, and caused all manner of chaos and disruption, leading to Glasgow piling on the pressure with several visits to Bath’s 22 but crucially leaving with nothing to show for it. Unfortunately the last attack – at one point inches short of the try line – led to a Bath penalty and by the time the lineout from it was taken, the clock was in the red. After securing their own ball the ball Bath booted it off the pitch and the game was over.

The result meant 3rd in the pool and no quarter final, but Glasgow can hold their heads high after that performance and several great results earlier in the tournament. They will rue dropped points from earlier rounds; especially against Toulouse. That said, Warriors are in a good place and a lot of teams should pay them far more respect next season. Townsend, his team and the fans can be very proud of their team.

SRBlog Man of the Match: Whilst Bennett, DTH, MacArthur and Dunbar played well the nod is given to Fraser Brown on his first European start who was immense in a game where he was playing out of position at openside flanker. Will big Vern have taken notice?