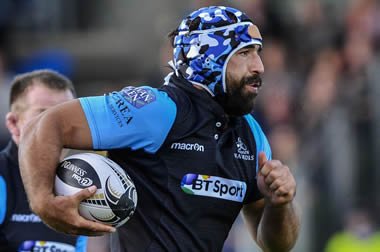 Glasgow welcomed Toulouse to a fiery Scotstoun eager to make up for the failure last weekend to return from France with anything, despite the clear opportunity to do so.

The early periods of the game were characterised by both sides kicking penalties and Glasgow perhaps not getting the rub of the green from referee Wayne Barnes, particularly after Swinson was felled by an iffy tackle from Guthro Steenkamp. For Toulose, Bezy and Doussain and for Glasgow Russell and Hogg, missed chances and after half an hour the scoreline was as low scoring as last week, 3-6.

The Toulouse pack were as assertive as in the previous encounter but Glasgow looked still a little unsettled. They were able to put together plenty of territory but there were still too many little mistakes and soft penalties that allowed Toulouse to relax – always a dangerous thing. It was distinctly unlike the sort of thing we’ve come to expect from these boys in recent years, but depressingly familiar from watching Scotland over the last decade.

Neither side had truly fired as both sides sized each other up, but it was certainly an interesting prospect for the second half and Glasgow’s big runners – Strauss, Gray, Dunbar, Vernon – had made enough ground to suggest scores could be had, while Russell and Hogg were looking lively and kicking from hand well.

The home side came out energised in the second half as you would expect facing a 40 minute period that could define their season. Rob Harley made a meal of Toulouse’s lineout and they snaffled the ball and surged forward until Tekori was pinged at the lineout. To the agony of the home fans, Russell swiped the kick wide again and Glasgow were unable to draw level. Up at the other end, Harley miscalculated and gave another soft penalty away; that one wasn’t missed.

After that flame sputtered out, it was looking like more of the same from the first half; Glasgow with plenty of territory, making ground but unable to convert it into points. Toulouse on the other hand were making it look effortless to chalk up the points; in fact sometimes they didn’t really look like they were doing anything at all. Although Glasgow’s defence looked able to tackle when required, they gave Bezy too many simple shots at goal.

When Glasgow looked to change things up with 20 minutes to play and the flying Fijians (and Sean Lamont) were on the park, the score lay at 3-12. It was recoverable with a bit of luck, but unlikely to allow them to open up the sort of margin where Toulouse would leave with nothing. Canny cup rugby from the French side, who looked more comfortable with every moment that slipped off the clock.

Conditions weren’t helping Glasgow’s offloading game with a slippery ball, but sadly that was what they needed to inject some pace into the game and try to tire out Toulouse’s bulky pack. They weren’t going to win without it, but they weren’t able to win messing it up.

Luckily at least, Duncan Weir reversed the kicking trend and brought Glasgow back to bonus point range. Bench emptied, they had some great attacking positions in the Toulouse 22 and earned a penalty with 8 minutes left, which captain Josh Strauss opted to kick.

With pressure to deliver, Weir was up to it and made Glasgow’s push for an unlikely win a little more comfortable, with Toulouse needing a try to deny them anything. Toulouse didn’t seem that bothered by Glasgow getting a bonus point, and were content to soak up the clock with the forwards while Glasgow battered against a red wall and came up empty, time and again.

This was despite the best efforts of Nakarawa and Matawalu who did what they usually do, causing chaos and slipping unlikely passes past Toulouse defenders at pace. It’s a measure of how successful Glasgow are by how often you see Tommy Seymour. When they are good he is everywhere. He was a rare sight today.

Unfortunately chasing the game means risky play, and Glasgow so nearly came away with nothing again when Clerc pounced on a loose pass and sprinted up the line. Hogg was able to gather, but was unceremoniously bundled out the back of his own in goal area for the final whistle.

Glasgow will reflect on the past two matches ruefully, as they were in with a shout of winning both despite not really deserving to, but could not find the assurance to unlock Toulouse, who now sit comfortably atop the pool. From an exciting start, Glasgow now have work to do to get out of it.