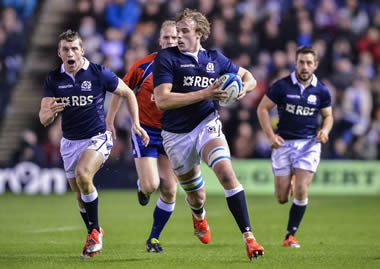 Scotland kicked off their Viagogo Autumn Internationals with the visit of an Argentina team that had not lost at Murrayfield since 1990. Despite Scotland winning their last (close) encounter in the summer, Argentina were fresh off the back of a victory over Australia in the Rugby Championship and seem to have discovered a new, more expansive, dimension to their play.

With pre-match promises from captain Greig Laidlaw to make Murrayfield a “horrible” place for other teams to come and play, the Scottish weather had clearly heard the call with a typically driech and drizzly night welcoming Los Pumas to the new artificial pitch.

The early signs confirmed that Argentina have long since stopped making up numbers in International Rugby, with a powerful tackle dislodging the ball from Greig Laidlaw’s hands and Argentina gathering the ball and running it in from well inside their own half.

Or was it just old bumbling Scotland again?

Interestingly though, Scotland did not seem phased – it was horrendously early in the match after all, and a period of sustained possession saw them right back into it when Richie Gray battered his way on to the scoresheet without requiring the man outside him. Laidlaw, who is currently on 90% completion at Gloucester, sneaked the conversion over to even things up.

Nicolas Sanchez kicked Argentina back into the lead after both Gray brothers piled over a ruck too enthusiastically, and there were only 12 minutes on the clock. By the time the clock was stopped at 16 minutes for an injury to Rodrigo Baez, Adam Ashe had already made 7 carries.

Conditions be damned, it was exuberant stuff from both sides.

There followed a few scrums during which at least the pitch could not be blamed for all the resets as referee Wayne Barnes cut a frustrated figure. When he awarded a free kick to the home side, the ball was spread wide and Tommy Seymour was barged off the ball by opposite number Juan Imhoff as he chased his own grubber kick. Imhoff was promptly sin-binned by Wayne Barnes.

It was a case of “anything you can do” as Scotland sustained pressure from the resulting lineout and Jonny Gray stretched over the line for a try of his own.

Gray continued to impress moments later as he ripped the ball in the tackle and receiving it, Laidlaw made a rare break, spinning a perfect “New Zealand backwards” pass out to Maitland who had plenty of space to run in another try. Again the scrum half converted.

Tails and heads clearly up, Scotland were trying everything, but in a curiously controlled manner. The work was done by the forwards and the ball only went wide when merited.

Jonny Gray received a rare blot on his copy book after Ross Ford (of all people) made a great break through the middle and passed to Gray who should really have offloaded to a sprinting Mark Bennett on his inside instead of looking for contact.

Laidlaw increased the lead on the half hour mark with another penalty before Argentina enjoyed some territory of their own. With Sanchez starting to miss penalties it was looking like a long way back for the visitors.

Scotland were content to soak it up, then march tenaciously upfield and grab some more points. The half ended with Laidlaw missing a kick, but overall it had been about as good a half of rugby as we’ve seen from Scotland in recent memory.

There were a few more squiffy kicks to start the second half as Russell put the restart out on the full then Hogg missed a penalty kick from out wide that Laidlaw didn’t fancy.

But Scotland got right back into action with Laidlaw making another darting run and a nice flat pass, this time to Hogg, who dived in at the corner. It was almost a mirror image of Maitland’s earlier try, but why change things up too much?

Scrums continued to be a bit of a mess but it was Scotland’s veteran front row that was getting the better of the illustrious Argentinian one.

In the Argentine midfield El Mago himself, Juan Martin Hernandez was pretty quiet with little room to work up against the oppressive tackling of Dunbar, who was just the rock needed alongside new boy Mark Bennett.

Argentina made a few substitutions in the backs and it seemed to give them a bit of impetus with some sustained possession. When the ball moved inside the 22 though they struggled to retain it, whether through intense two man tackles or a slippery ball it was hard to say.

The set piece too was a lot more effective, with precision at the lineouts and Barnes seeing things Euan Murray’s way in the scrums more often than not.

Laidlaw kicked another penalty but Argentina continued with most of the ball. Rob Harley was binned – perhaps unfairly – for removing the supporting player at a lineout close to the Scotland line and Argentina continued to press but instead of a try, the TMO spotted a double movement.

It was clearly a frustrating experience for the visitors as nothing quite clicked, and while there was a bit of lull in atmosphere Scotland were at least sitting on a 24 point lead. Argentina had so many penalties that in a close game they would have kicked, but now they were forced to tap and go for tries, which just played into the hands of the home defence who were cheered for every Argentine attacker they tackled backwards a few yards.

Argentina did find a way back on to the scoreboard as their scrum found an edge and Barnes marched under the posts for a penalty try. They dropped the conversion as if in a hurry to get back closer and similarly rushed after Cubelli’s second try on 80 minutes, but in between those Scotland had reaffirmed their dominance of this game with an easy interception try for Tommy Seymour.

Jim Hamilton was sin-binned – almost inevitably – for repeated penalties conceded during that sleepy period from Scotland, just as Rob Harley returned from his binning. It will perhaps be second half discipline that Cotter concentrates on for next weekend as the black spot on Scotland’s very positive performance.

Not that Scotland are likely to have the comfort of getting 20 points ahead and going to sleep against New Zealand.

SRBlog Man of the Match: Greig Laidlaw put in a true captains performance with sniping runs, quick delivery that allowed Scotland to play at the pace they clearly wanted to. Much improved speed of service and posing an attacking threat will give us Cusiter fans pause for thought. Great kicking from hand too.