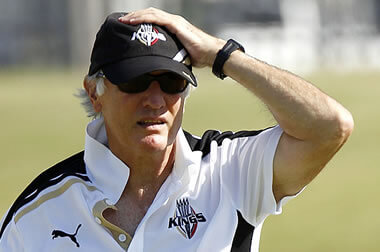 Another week, another grim showing from Alan Solomons’ Edinburgh.

In following hapless losses to the Ospreys and Connacht, and a fortuitous draw against the Scarlets with Friday night’s thirty-point whitewash at Ulster, the head coach again failed to reconcile his growing list of doubters.

At Ravenhill, Edinburgh played without leadership or direction, nor any glimmer of a discernible game-plan. Their defence was woeful. Their attack consisted of long, high punts, supplemented with painfully predictable – and equally ineffective – one-off carries by forwards who collected the ball standing still.

It is truly the new Edinburgh way.

Hark back to Solomons’ arrival in the capital in August of last year. Talk of stoic defence and structured pragmatism abounded from players and coaches alike.

There would be no more swashbuckling-cum-suicidal offloading rugby. No more running from anywhere and everywhere. And most importantly, the chronic leakage of tries would be stemmed.

This new, exotic taste tickled the palettes of supporters accustomed to seeing their side excite and infuriate in equal measure. At last, a spot of simplicity.

Yet fourteen months on, Edinburgh’s tackling is as suspect as ever. And for ‘pragmatic’, read ‘boring’. The set-piece is faulty and disjointed, and the attack has descended into a tangled mess of imprecise monotony.

There is little doubt that the style Solomons wants his players to adopt can prove fiendishly effective. Edinburgh battered the Ospreys, who at the time of writing, top the PRO12 table at Meggetland last season. They beat Munster, Gloucester and Perpignan on European duty.

Less than a month ago, they triumphed at Thomond Park for the first time ever employing the dogged defence and sturdy set-piece game their coach craves.

A pair of encouraging pre-season performances against English opposition coupled with that opening round victory in Limerick offered hope that his vision was taking hold. These wins remain but flashes in the pan.

Consider Edinburgh’s early-season 44-10 hammering of twelve months prior, at the Liberty Stadium, dished out by an Ospreys side stronger than the one that put a further eighteen points past them a fortnight ago.

Compare the performances. Compare the results. Compare the ease with which Rhys Webb glided through a gap most schoolboy teams would plug on his way to the try-line with the simplicity of Richard Hibbard’s double in 2013.

Personnel aside, what has changed? Where are the improvements?

We ought now to be posing a more difficult question: under Solomons’ stewardship, where are Edinburgh going?

The club appears listless, even soulless, playing fixtures as it does on an island of hybrid turf amid the vast ocean of empty blue seats at BT Murrayfield.

It has no identity, no heart, and these days, not a lot of Scottish-ness either.

The numerous overseas signings Solomons has made are not duds as some suggest – duds don’t play regular provincial rugby in any of the ‘big three’ Southern Hemisphere nations. It should not be overlooked either that in Matt Scott, Dougie Fife and Dave Denton, he is bereft of three of his most influential figures.

But few are surprised by the misshapen, oversized gaggle’s failure to curb Edinburgh’s decline. Of the many imports, only Cornell du Preez and in patches, Grayson Hart have made a tangible impact. Quantity over quality is the mantra. The team has suffered for it.

And one final thought: perceptive readers will note I chose not to omit the recent sponsor’s addition to the moniker of our national stadium. This is not to appease the SRU PR team; rather it acknowledges two letters that now bear great significance within the Scottish game.

These two letters represent a serious sum of cash and a note of caution for Solomons & co. In years gone by, the Union would have struggled to raise the funds to terminate his contract – or indeed hire him in the first place.

That is no longer the case and Solomons is not indispensable. We haven’t reached panic stations, not yet by any means. But time is ticking for the wily veteran to turn his team around.

15 comments on “Time ticking for Solomons to halt decline”