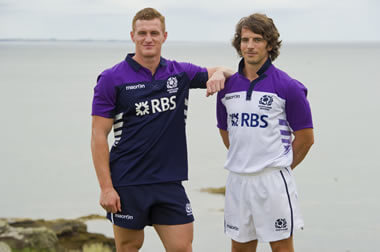 New season, new coaching setup, new captain. Since the summer, the national 7s team has seen a number of changes take place as they prepare for the first game of the tournament this weekend on the Golf Coast, Australia. Despite finishing 12th overall in the HSBC 7s World Series, the Scottish team were really able to show what they could do when at home, finishing 4th in their own tournament in Glasgow in May.

Then you had the Commonwealth games. 2 days, over 170,000 spectators – that really explains it all. Scotland came within inches of beating the All Blacks in the group stages before bowing out to South Africa in the Medal quarter-final match. Nonetheless, it was a tremendous advert for the Scottish 7s game and it has seen early bird sales for next year’s Glasgow 7s tournament leap ahead of last year’s figures.

So, onto the new season and Scotland have already been in action in the final rounds of the Rugby Europe Grand Prix Sevens Series with two plate wins in the final two rounds in Manchester and Bucharest. This has also been our first opportunity to see new head coach Calum Macrae lead his team in competition. Hailing from Melrose, Macrae is a former Scotland 7s international and also played for the Border Reivers, Edinburgh and Worcester.

One of the more surprising changes that Macrae made was that despite still being named in the squad, Colin Gregor has lost the captain’s armband to sometime Glasgow fly half Scott Wight, who this time last year was yet to play an international 7s match. He does, however, have a large amount of 7s experience due to his time spent at home club Melrose as well as his victory with Glasgow Warriors at this year’s Melrose 7s. Perhaps this leadership switch will do Scotland the world of good as Gregor, who has been inconsistent in his form recently, will be more likely not to be playing every match, which has been taking its toll on the 33 year old.

Despite the leadership changes, the squad itself has not changed too much with only two players preparing to make their World Series debuts on the Gold Coast this weekend: Edinburgh winger Damien Hoyland and Edinburgh Accies full-back Nyle Godsmark.

20 year old Hoyland started to make his name known to age grade and professional selectors last season when playing a key role in the Melrose team  that ended up winning the RBS Premier 1 title.

Meanwhile, Godsmark impressed greatly in this year’s Melrose 7s as he was part of the Accies team that made it to the final before losing to Glasgow Warriors, a final which saw 5 of this round’s 12 man squad compete in. Both players have impressed the selectors with their strong one-one-one skills, both in attack and defence and it will be interesting to see what the young players can do.

Last season one area of the game in which the Scots were relatively dominant was the physicality they brought to the party. Although the squad is still packed with big players such as Scott Riddell and Struan Dewar, one player they are likely to miss greatly will be James Eddie who is now making more regular appearances for Glasgow Warriors. He leaves his replacement Gregor Young with big boots to fill, however, if he manages to play with the same physicality as Eddie, then the player described as a “6ft 4″, 94kg prop/centre” by the SRU will surely make his presence felt in the team.

So Scotland look stronger than last year, but what about everyone else? Scotland have been drawn in Pool C this weekend and will join Australia, Fiji and Portugal in one of the tougher groups of this tournament. Although this may sound like Scotland have no chance against two of the 7s heavyweights, you have to remember that the Scots have beaten Australia on the last two occasions they have met and they beat Fiji in two of five matches last season…

Australia could, however, be a threat even to New Zealand this year as their policy of only picking young players with lots of potential. Last year the average age of their team was 21 and with that squad learning with every tournament, they could be ready to peak come the 2016 Olympics. For this round, with the home advantage, expect them to be challenging for the title with the usual World Series favourites New Zealand and South Africa.

Speaking of the Olympics, over the summer, it was agreed that the English 7s team will “represent” Britain for this season’s World Series. With only the top 4 teams this season gaining automatic qualification for 2016, as well as one European qualifier and a repechage qualifier, only one of the 3 British nations will compete in the qualification process.

With England finishing higher than Scotland and Wales last season, they were nominated to represent Great Britain during qualifying although players from other UK countries will be allowed to compete in the actual tournament presumably with one eye on Rio 2016. So if things get tight near the top four, you might even find yourself wanting to support the English for once…

Scotland’s chances: The team has certainly improved all across the board in the past year and after finishing 12th last season, I think a top 10 finish is highly possible.

Scottish player to watch: He was nominated as our Scottish player of the tournament at the 2014 Glasgow 7s and I expect Scott Riddell to have another strong season. A strong runner with the ball and hand as well as being crucial in defence, he can be a rock for the Scottish team in the tighter matches.