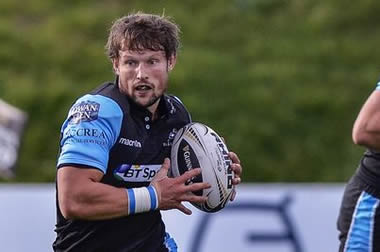 Glasgow travelled to sunny Cardiff with plenty of internationals on display for both sides, and a chance for the Scots lads to get used to playing on an artificial pitch similar to the new one at BT Murrayfield.

Both sides were looking to run it right from the off, with Rhys Patchell finding a worrying amount of space to chip into in behind the Glasgow defensive line and eventually earning the home side an opening penalty.

Glasgow came straight back with some nice offloads of their own, but Lamont spurned the three points on offer in favour of some space through the middle. Thwarted on that occasion, Pyrgos kicked two penalties of his own in short succession to give Glasgow the lead.

Pyrgos then almost lost all that credit by taking a quick throw to himself, unaware that Rhys Patchell was a lot closer chasing the kick than the Glasgow scrum half may have thought. As is often the case, Josh Strauss got Glasgow out of a scary situation with some strong running before Mark Bennett and Peter Murchie turned it into a half chance for Glasgow with some impressive pace.

Patchell evened the scores on 18 minutes after the talkative Adam Jones pancaked Chris Fusaro into a ruck, thereby giving the Glasgow player little chance but to be off his feet under the gaze of referee John Lacey.

With perfect conditions underfoot and sun in the Welsh sky, both sides were happy to throw it about, but Glasgow were still regularly undone by early season rustiness. Nice hands from standoff Pete Horne put Dunbar into space, but his support weren’t up quick enough and Glasgow were whistled at the ensuing ruck, with the scrabbling hands of Sam Warburton playing their part in the ref’s decision.

It was great to watch all across the park but Cardiff were seemingly capable of playing to the tempo Glasgow set and were fiercely quick in defence putting Glasgow’s ball retention under serious pressure.

Sean Lamont had clearly had enough of that sort of thing and went into a ruck close to the touch line himself, pinched the ball from the Cardiff player and ran the try in from half way, bouncing Patchell on to his back side in the process.

As you’d expect the home side came out flying for the second half looking to up the tempo themselves, with the impressive (and resilient) Murchie having to scramble to dot down a wayward chip kick in front of Alex Cuthbert.

They were starting to find an edge in the scrum too with Jerry Yanuyanutawu on in the front row for Glasgow, Adam Jones leading the efforts as you might expect and allowing Patchell to kick the ensuing penalty from well inside his own half. Gregor Townsend immediately sent Gordon Reid on to shore up the scrum but that didn’t work and only Patchell’s wayward boot sparing the Glasgow pack’s blushes.

Reid’s influence was short-lived; he was yellow carded for playing the ball as he rolled away – although either of the Glasgow props may have come under heavy scrutiny at the next scrum.

Henry Pyrgos, who had played an excellent match, was also replaced by Niko Matawalu who made his (by now inevitable)  instant impact with an interception outside the Cardiff 22, diving through the air to make good on the score and reverse the momentum which had been threatening to slip heavily Cardiff’s way.

From then it was all Glasgow as the conversion was kicked from out wide by substitute Duncan Weir to keep the lead. He was gifted an even easier penalty kick on the hour mark to make it a point a minute when Reid was off the pitch.

The Arms Park crowd was noticeably quieter, at least until Matawalu threw an interception of his own as Glasgow were trying to kill their hopes for good. Luckily for us (and not for them), Richard Smith was judged offside and instead it was whistled back and Weir kicked the points for a 14 point lead going into the last ten minutes.

Sharp passing by Niko put the returning DTH Van Der Merwe into space, who sprinted down the line and passed back inside to the Fijian who wouldn’t be caught.

From uneasy boos the atmosphere had turned to shocked silence as Glasgow still had time for a bonus point. They were unable to claim it but held their lead with growing confidence, to return home worthy winners.