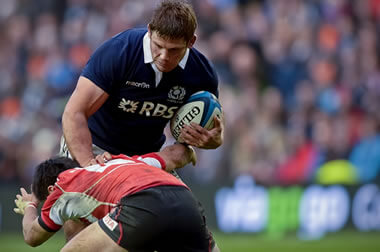 Vern Cotter has made a bunch of changes to the Scotland team as the Sevens players and exiles fly home and the bare bones of Edinburgh and Glasgow fly out.

What this means is an exciting second row partnership of Jonny Gray and new captain grant Gilchrist. What it also means is that the back row looks a little unfamiliar and there is yet another half back pairing, including Six Nations incumbent Duncan Weir.

23-year-old Edinburgh Rugby lock Grant Gilchrist will captain the side, thus becoming the youngest Scotland captain since Gregor Townsend skippered the men in blue against Australia 18 years ago.

Gilchrist, who has captaincy experience from Scotland age-grade sides, in addition has taken on the leadership mantle from Greig Laidlaw during Edinburgh Rugby matches this season.

“It’s a huge honour, one I’m looking forward to,” declared Gilchrist. “I hope that I can fulfil what it is to be Scotland captain.  For me it’s a boyhood dream.  Of course there’s massive responsibility, not just to this team, but to the entire country and Scotland fans throughout the world, but I’m really excited by it.”

Cotter said: “He has impressed me with his leadership qualities. He’s already calling the lineouts and he’s been part of this tour right from the outset, which is important for continuity from the first two games.

“He leads by example. Some captains are more at ease talking and organising whereas Gilcho is more adept at just getting on with it.”

Gilchrist is joined by Stuart Hogg, Sean Maitland and Peter Horne from the starting XV that barely scraped home against a determined Canada last week.

It was inevitable that there would be wholesale changes for the Pumas contest given the arrival of 13 new players from the UK this week.

Cotter explained: “What we’ve seen from previous games on the tour has been a desire to play. Mistakes have crept into our game because we haven’t spent much time together.  I’ve been pleased with the energy and desire to score tries but not happy with the execution.

“I’ve shown the (video) clips to the new players and I’m looking to them to bring that same energy and desire to carry the ball and secure opportunities and hopefully fresh legs can help. I need to see what players are doing.  We have to show teeth. We have to be able to attack from anywhere and we have to be able to dictate the pace and tempo of games.  It’s a challenge.”

Scotland have won their last three Tests on Argentine soil, once in 2008 and twice in 2010, and the Pumas, with the Rugby Championship on the horizon, have lost to Ireland in two matches over the past fortnight.

4 comments on “Gilchrist to lead Scots”