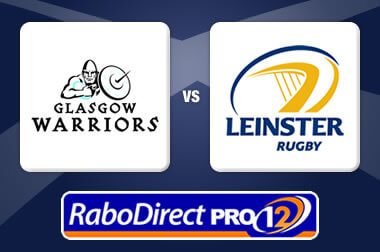 The glorious Dublin sunshine set the scene for the RaboDirect PRO12 final on a pristine pitch with undeniably the two top teams in the league, packed with internationals and the best ref in world rugby presiding (sorry Steve Walsh).

It was set up to be a corker.

As you would expect both sides came out charging, with Glasgow keen for their first silverware and Leinster keen to give the great Brian O’Driscoll a fitting send off.

The opening half was exciting and saw plenty of handling and attacking, it was from a kick that the first points came. Peter Murchie’s up and under into the sun was scuffed by Kearney’s boot ahead to Mike Ross – who was offside – and Russell had his first chance of points. The eerie silence of the RDS failed to unnerve the young standoff and he slotted it between the posts.

Scottish teams often go from the sublime to the ridiculous, and so it was with Jonny Gray’s bulk interfering with Cusiter’s foot as swung at a box kick. That led to a scrum that gave Leinster their own penalty moments later.

They opted for the corner, which was either a worrying signal of intent, or the sort of over-confidence that tends to play into Glasgow hands.

As Leinster put it through the hands, Alex Dunbar stripped the ball from his man and earned the scrum. Glasgow cleared their lines and burst down to the other end of the park. Chris Cusiter, who had one of his best halves of rugby in memory broke through a gap and sent Strauss barrelling into the heart of Leinster. They were only let down by a beautiful but wayward pass from Horne that unfortunately spun just ahead of Dougie Hall. Had it been Seymour or Maitland, they could well have been in.

The great man O’Driscoll limped off after only 8 minutes to a roared ovation from all present, but perhaps it helped put the focus back on the rugby rather than the occasion. You hoped that would help Glasgow.

Seymour was tackled high as Leinster cleared and Russell slotted that from out wide to increase the lead to 6. The mood of the 3,000 or so Glasgow fans who had travelled was overwhelmingly positive and they punched well above their weight in terms of noise.

Perhaps being down woke Leinster up, as a series of quick drives took them up the park and quick ball through the hands put Kirchner over in the corner to get the game really going. Gopperth converted to give the hosts the lead, and Leinster had shown their true danger going forward.

There followed a breathless spell of attack from both sides as they attacked each other at pace and Glasgow’s offloading game put in an appearance, but for the most part Leinster’s defence was having a more comfortable time than Glasgow’s.

Glasgow lost the impressive Chris Fusaro and Dougie Hall just after 20 minutes; O’Driscoll wasn’t the only one feeling the impact of the bruising defence and there were a lot of tired looking bodies even as soon as the half hour mark.

Although on perhaps earlier than Townsend would have planned, Nakarawa had his usual impact, soaring through the Leinster defence ball in one hand and although Glasgow didn’t score, they earned a ruck penalty close to the posts and Russell put Glasgow back in the lead.

It didn’t last long though as Leinster found space with Horne down injured, Gopperth put a simple play together for Jennings to scamper over for the try.

It looked like a good cushion but Russell clawed back a long range penalty on the stroke of half time, to narrow the gap and set up an intriguing second half contest.

Leinster came back out for the second half and quickly restole the momentum, a Jimmy Gopperth kick giving them great attacking position. From there a woozy Pat MacArthur overthrew the lineout, Cian Healy went close to the posts but the TMO found Dunbar had prevented the ball from hitting the posts.

Clearly on the ropes, Glasgow clung in there without much possession as Russell also looked groggy despite throwing himself into everything, while Leinster looked sharp and aware of the space, let down only by the occasional over-hefted kick.

The Warriors came perilously close to a score as Niko Matawalu (on for Cusiter far too early) led the charge but took a possibly rash decision to duck for the try. He knocked it on, Leinster broke and only last ditch tackling from Murchie, Maitland and Horne prevented a certain try.

Leinster were looking increasingly confident even as Glasgow continued to throw everything at the game, and they took a penalty on the hour as Moray Low was found unable to cope with the pressure at scrum time, perhaps allowing the scoreboard to more accurately reflect the balance of the game as it stood at that point.

The exuberance of the Fijians cost Glasgow further as Nakarawa was adjudged to have taken out the scrum half despite Reddan having his hands on the ball. A marginal call, but it took Leinster’s lead out to 20-12 and all but settled the result.

Gopperth had controlled the game finely but it was a measure of Leinster’s confidence that he tried a wonky drop goal attempt rather than kill off the game.

If you want a symbol of this match, it was one of the Warriors campaign heroes in Josh Strauss knocking on a simple pass. The early pace of the game had taken it’s toll; Leinster were ready for whatever trickery Glasgow threw at them and they had to force it.

Nakarawa’s offloads, Strauss’s runs, even Niko’s darts. Leinster read them, tackled them, turned them over. By the time Kirchner took his second try, and D’Arcy took his with 5 mins to go, Glasgow were out on their feet and looking a little lost.

It was a real shame for a team that has looked so in control of their own destiny all season to come up against one even more convinced of theirs, and able to command it.

O’Driscoll watched most of this match from the sidelines, but he was able to celebrate come the end while Glasgow were sent homewards to think again.

SRBlog Man of the Match: Jimmy Gopperth was the man of the match for me having directed Leinster brilliantly, but this is the Scottish Rugby Blog. The top marks for a Glasgow player would go to Chris Cusiter, who had probably his best half of rugby in years. Taking him off just after half time (if not an injury substitution) was criminal and Glasgow lost much of their direction after that. Much credit also to Jonny Gray, Finn Russell (who finally made a few mistakes) and Pete Murchie, who never gave up even during Leinster’s last flourishes.