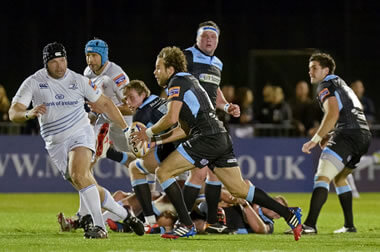 Full-back Peter Murchie will return from injury tomorrow night in Dublin, when Glasgow Warriors take on Leinster at the RDS in the RaboDirect PRO12.

The 28-year-old has been out of action since October with a dislocated shoulder but returns for the trip to face the champions meaning fill-in fullbacks Niko Matawalu and Ruaridh Jackson move to wing and fly-half while the promising Finn Russell is shifted out to 12 beside Richie Vernon.

Tommy Seymour, Chris Cusiter and Tim Swinson have been released from Scotland duty for this weekend’s game. Cusiter will captain the side.

In the pack Gordon Reid replaces Jerry Yanuyanutawa at loose-head, Pat MacArthur returns from injury at hooker in place of Dougie Hall and Mike Cusack continues at tight-head.

Swinson lines up in the second-row alongside 19-year-old Jonny Gray while a strong back row sees perpetual try-scorer James Eddie start at blindside, Rob Harley at openside and Josh Strauss continues at number 8.

Glasgow won their previous encounter with Leinster 12-6 at Scotstoun back in September, but the Warriors have not won at the RDS since September 2011. Leinster have put out a strong team including Ian Madigan, Fergus McFadden and Zane Kirchner.

Glasgow Warriors head coach Gregor Townsend said: “We were very disappointed to lose at the Dragons last weekend and we’ll need a much better performance tomorrow night in Dublin.

“Leinster are one of the top teams in the league and are the defending champions, so this game will give us a good indication of where we are as a team.

“It’s great to have Peter Murchie back involved again after his injury lay-off and we’ve also been boosted this week by the return of Tommy Seymour, Chris Cusiter and Tim Swinson from the Scotland squad.

“Our recent encounters have all been very close and we’re expecting another tight match tomorrow night.”

The match will be shown live on BBC Alba.