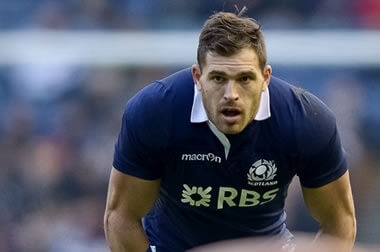 Scottish fans have grown all-too accustomed to the sort of defeat suffered by their team at Murrayfield on Saturday.

Despite enjoying the lion’s share of possession and territory, and creating numerous scoring opportunities, Scotland emerged try-less and on the wrong end of a 21-15 scoreline against Australia.

For all that the Wallaby backline was depleted by injury, sanction and suspension, Ewen McKenzie could still call upon his first-choice pack, half-backs and of course, game-breaking full-back, Israel Folau. And while the likes of Mike Harris and Chris Feauai-Sautia have spent much of the past three months or so holding tackle bags, they were more than able replacements for those that missed out. Indeed, only Christian Leali’fano played out of position, moving from his usual inside to outside centre.

His counterparts in the Scottish midfield remained ponderous, static, and unable to combine fluidly with the lively Duncan Weir at fly-half.  Weir, one of the home side’s better performers, has been encouraged to play a flatter, more threatening game for his country. But centres Duncan Taylor and Nick De Luca, though powerful in defence, oft bore the deep-lying and slow-paced characteristics of many of their recent predecessors in the number 12 and 13 jerseys.

Hardly a new problem, and nor is the chronic inability to finish chances when they arise against the world’s top teams. The killer instinct that separates the best from the rest has long-since evaded the Scots, and it was certainly not helped on Saturday by the absence of arguably their three greatest attacking threats in Stuart Hogg, Matt Scott and Tim Visser.

But imprecision and indecision proved detrimental to Scott Johnson’s men’s offensive prowess. Arguably their best chance of the game presented itself on the stroke of half-time via a fifty-metre midfield break from Johnnie Beattie. Beattie fed Sean Maitland, who had Sean Lamont galloping up outside him with the Australian cover defence scrambling across the field.

What happened next was easily summed up by those two words above. The full-back’s pass to Lamont was poor, causing the winger to check and slow down. Imprecision. Then Lamont himself was guilty of stalling and stuttering on a poor Murrayfield surface, opting neither to cut inside nor pin his ears back and head for the corner, before being hauled down metres from the line. Indecision.

It was a gilt-edged opportunity, and one that had to be taken against a side with the quality of the Wallabies. Johnson bemoaned Scotland’s “naivety” after a defeat that, like so many before it, could have ended in victory.

“We had some youngsters out there trying to work through a couple of things,” said the coach post-match.

“We had chances, but just didn’t take them.

“It will come when guys start understanding Test rugby and what’s required. It’s not a big thing that we can’t fix.”

That may well be the case, but it remains a mammoth task at Test level to score tries minus quick attacking ball. Johnson opted to head into this game without a genuine openside flanker, and Scotland paid the price for it at the breakdown. The selected back-row of Beattie, captain Kelly Brown and Dave Denton lacked balance, and while all are excellent players, none could match Wallaby seven Michael Hooper – one of the world’s best “fetchers”.

While Brown’s work at the ruck and contribution to the contest for possession is to be commended, he is not an out-and-out openside, and could never be expected to emerge triumphant from a battle with Hooper and his prestigious aides in turnovers and penalties, Scott Fardy and Ben Mowen.

Under McKenzie, the Australians are prone to flirting with illegality and sanction, particularly around the ruck. They conceded a total of 30 penalties in their past two games against Ireland and the Scots. In both cases, the respective referees (Chris Pollock (NZ) and Jaco Peyper (SA)) are renowned for taking no prisoners where the breakdown is concerned, but the Wallabies seem happy to limit teams to shots at goal from the 40 metre mark rather than risk yielding a try. And they emerged with their goal-line intact from both those encounters.

It’s a trade-off that, while irking many Scots who oft saw their team’s progress halted by a cynical infringement, once again highlighted the lack of attacking potency in navy blue. The buzzword for Johnson and Scotland over the past fortnight has undoubtedly been “execution”. At the moment, whether applied to lineout, scrum, or ruthlessness, it’s the failure to act upon that slogan that’s holding them back.