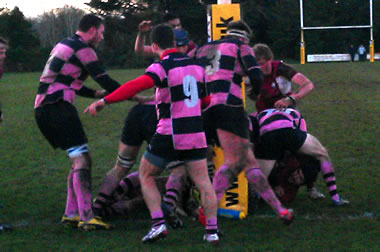 This year could be equally tight.

Coach: Kevin Wyness, promoted from within to replace Alex Duncan.
Departures include: Murray Douglas (to Heriots), Cam Eyre, Callum McConnachie
Arrivals include: Mike Crawley (Boroughmuir) Harry Duthie (Dundee HSFP) Struan Cessford (Heriots) Robin Cessford (ex-Heriots) Tom Preece, Jamie Metcalfe, (both NZ)
Keys to Season: Will new signings in the pack up make up for loss of Murray Douglas? How good will emerging young talent like Rennie, Earle Wright, Turner and Crammond prove to be? Do they have a consistent enough 10 to bring out the best in a maturing team?
Pro Influence: Fraser Brown and Byron McGuigan could get some game time with them

Coach: Peter Laverie, experienced coach, promoted from within to replace Kenny Murray who has joined the Glasgow Warriors staff
Departures include: Hayden Wisnewski (to NZ) Nick Campbell (to Jersey) George Hunter (Loan to London Scottish) Ross Doneghan (to Darlington)
Arrivals include: Fergus Scott (Glasgow EDP) Jamie Malcolm (GHA) Graham Williamson (Cartha QP)
Keys to Season: The backs remain intact from last season, but will EDP 10 Finn Russell be available as much or will he be required by Glasgow? Can youngsters Rae, Malcolm, Templeton and McCallum step up to give the same strength in depth in the pack as last year? Can Kenny Murray’s demanding standards be maintained? With a big focus on the British & Irish cup can they repeat last year’s domestic consistency?
Pro Influence: Sadly, Niko Matawalu is unlikely to appear, but Mark Bennett & James Eddie may be available occasionally although Bennett will be hoping this is his year to step up at pro level.

Coach: the experienced Ally Donaldson continues at the helm, which will provide important continuity to a squad with a big turnover
Departures include: Liam Draycott (Gala) James Johnstone (Scotland 7s, Hawick) Alan Whittingham (Stewarts Mel) Fergus Scott (Ayr)
Arrivals include: Grant McConnell, George Horne, Karl Main, Alan McWilliam (all Scotland U18) Ehan Pollock (12) Joe Reynolds (10) and E Mitchell (4) all NZ, David Cherry (Blaydon)
Keys to Season: How quickly can the next generation of exciting young backs match the achievements of Currie’s recent graduates to Pro Rugby? Will Dave Cherry provide to be the consistent hooker Currie need to replace the departed Fin Gillies and Fergus Scott? How often will Jonny Gray be available? Can Ben Cairns and Sean Cox have the same coaching impact at Currie as Steve Lawrie had at Heriots last year?
Pro Influence: Robin Hislop, Sean Kennedy and Jonny Gray are the most likely of their drafted players to appear.

Coach: Johnny Else is promoted from within to replace the commanding Simon Cross, who has been appointed to the staff at Worcester alongside Carl Hogg and Dean Ryan.
Departures Include: Dan Teague (retired)
Arrivals Include: Ben Vellacott (Scotland U18) Neil Aitken, David Bates (both Edinburgh U), Nick Barron (Murrayfield W)
Keys to Season: How big an impact will a fit Alex Blair – who played summer rugby in Australia – and a returning Jamie Sole make on Premier 1? Will the attention to detail of Simon Cross be missed in the development of EDP prospects Farndale, Allen and Watson? Can anyone step up to replace Dan Teague’s experience? Can the young squad cope with the demands of B & I Cup involvement and maintain domestic form?
Pro Influence: Alex Black will be a mainstay again, and Scott Riddell may prove a useful utility addition from the 7s squad

Coach: George Graham continues as coach, with his namesake and son stepping up to skipper the side at 9
Departures Include: Lee Millar (to London Scottish) Martin Christie (to Watsonians)
Arrivals Include: David O’Hagan (Musselburgh) Ewan Scott (Jed) Liam Draycott (Currie) Graham Spiers (Hartpury U) Rory Sutherland (Biggar) Jack Stillwell (Worthing)
Key to Season: Can anyone step into the gap left by Lee Millar’s departure to Pro rugby? Can home-grown stars, George & Gary Graham, Euan McQuillan, Euan Dods take one more step up to help Gala win something? Is there sufficient strength in depth in the back 5 of the pack to compete through the winter?
Pro Influence: Gala don’t tend to use their drafted pro players much, but could potentially call on 3 recent imports to Scottish rugby in Grayson Hart, Ollie Atkins and Piers Francis. Gregor Young, the young Jed 7’s specialist, has also been drafted to Gala

Coach: Jamie Dempsey and Jimmy Sinclair continue at the helm of the promoted Glasgow club
Departures include: Tom Preece (to England)
Arrivals include: Jack Steele, Andy Redmayne, Andy Linton (Dundee High) Ally MacLay (returning from Hong Kong) two Polish internationals, and a raft of Scotland and Glasgow age grade players
Key to Season: Can the young players Hawks developed last year – Herron, Yacoubain, Barnes, Redmayne – do it again one level up? Will the ‘old hands’ Mike Adamson, Rory McKay, have the hunger for another push up the league? How quickly can they integrate exciting new arrivals and create a consistent selection at 1st XV level?
Pro Influence: Scott Wight and Finlay Gillies could both be available and would make a huge impact

Coach: Phil Leck brought Hawick back up at the first time of asking, playing wide and fast attacking rugby, exemplified in their play off win over Dundee High. Leck was invited to coach the Scottish Club Rugby XV.
Departures Include: John Coutts (Stewarts Mel)
Arrivals Include:  Wullie Blacklock, Bruce McNeil (both return after a season away) K Manson Kullin (prop from England)
Key to Season:  Can Leck keep the camp ‘happy’ if results start to go against them? Do they have enough strength and power in the forwards to produce sufficient ball for Rory Hutton and company to deliver their brand of magic.
Pro Influence: May have drafted the best of all in the shape of Gregor Hunter, Chris Leck, and Rob McAlpine who could all be available regularly.

Coach: John Dalziel steps up to replace the departed (and still club-hopping) Craig Chalmers, with exciting additions to the backroom staff
Departures Include: Scott McCormack (Peebles) Wayne Mitchell (Retired)
Arrivals Include: Damian Hoyland (Boroughmuir) Austin Lockington (South Africa utility back) Todd Pearce (Australia, hooker) James Head (Lock, Hartpury)
Key to Season: Can they produce a consistent selection among their creative midfield backs that will release the flyers, Thomson, Anderson and Hoyland to score tries? Will coach Dalziel be as big an influence off the pitch as he was on it? How good can Andrew Nagle be?
Pro Influence: Harry Leonard, Alun Walker and Lewis Niven are among those drafted and could all play a significant part.

Coach: Continuity at County with Graeme Young remaining as head coach, and a second successive season in the B&I Cup
Departures Include: Sean Kennedy, Rob McAlpine (both now full time at Edinburgh)
Arrivals Include: Ali Price, Will Bordill (Glasgow EDPs), Jamie Swanson, Andy Watt (Boroughmuir) Kris Burney, Matt Larsen (Falkirk)
Key to Season:  Will the Glasgow quarter of EDP’s Hughes, Bordill, Price, and Ashe bring star quality to the home grown County set up? Can Stuart Edwards dominate games from 10 consistently, in the way Sean Kennedy often did at 9? With another year’s maturity can home grown Bhatti, Kennedy, Hutton, Leishman etc. prove County remain the best nursery for growing their own team in Scotland?
Pro Influence: Last year McGuigan, Bennett, Kennedy and McAlpine all contributed at County. This season they may struggle to get much game time out of their drafted pro’s who include Peter Murchie, Tommy Seymour, Alex Dunbar, Duncan Weir and Henry Pyrgos.