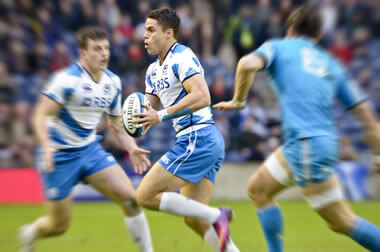 Scotland ended up with just three British and Irish Lions today as Warren Gatland announced the tour party he believes can take on the Wallabies down under.

And, yep, north of the border we have a few issues with it, and not just due to the lack of Scots.

We didn’t have a blinder of a Six Nations so we aren’t expecting to make nearly half the squad like Wales. There is also a fair chance representation will increase in case of injury, so we shouldn’t be too bitter.The first order of play is to congratulate Stuart Hogg, Sean Maitland and Richie Gray on their selection, and to all who made the cut.

But I can’t help feeling that in some areas it is a powerful squad while in others the selections seem a little oddball.

For example, why say you aren’t going to pick French based players then take Gethin Jenkins and Mike Phillips – and ask Jonny Wilkinson only to be turned down?

Why say you can’t afford to pick on reputation but must select based on form and use the Six Nations as a barometer, and then pick some who had pretty stinky tournaments and take Heaslip, Kearney, Hartley, Lydiate, Healy, Jenkins (again) or even Richie Gray, leaving out the likes of Simon Zebo, Chris Robshaw, Rory Best, Ryan Grant or Kelly Brown? Why pick 3 front row players from England who don’t start for their country, one of them because he has retired? Gatland even overlooked a Welshman in Paul James there.

The squad for the 10-match, three-Test series, which kicks off in Hong Kong on June 1, is made up of 15 Welshmen, 10 Englishmen (including 6 from Graham Rowntree’s old club Leicester and one member of coach Andy Farrell’s family), nine Irishmen and our three plucky Scotsmen and will be captained by Wales’ Sam Warburton.

Gatland said: “We spent a long time selecting this squad and there were some close calls with a lot of competition for places. But ultimately we chose the players who will give us the best chance of a Test series victory. A Lions Tour to Australia only comes around once every 12 years and we believe we have the right balance in the squad to be successful.

“We have a tremendous challenge in front of us but I know the players will be dedicated to the adventure and task ahead.”

Ultimately it is subjective; Gatland has made that point from the start.

I’m sure our boys will do us proud, however many of them we adopt.