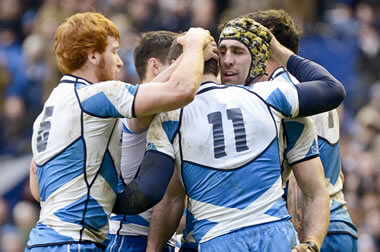 Scotland’s win against Italy will live long in the memory. Arguably one of side’s greatest victories of the professional era it added some spark to Scotland’s 6 Nations campaign with some in the squad even suggesting the team might be capable of winning the tournament outright. Ireland arrive at Murrayfield on the back of a scrappy defeat to England with the same win to loss ratio and will be just as eager to revive their championship chances.

The two week break might have sapped some momentum but it’s also given Scottish bodies a chance to recover. It’s also given some fringe players an opportunity to push for a place in the match day squad with Jon Welsh winning a place on the bench thanks to form and Euan Murray’s theological zeal.

So what do Scotland need to do to stop Irish eyes from smiling?

Scotland’s back row, particularly Rob Harley, did a fantastic job of targeting Orquera in the game against Italy. Starved of time, the scourge of French rugby was unable to run the game and was unceremoniously substituted after that interception from Stuart Hogg. Kidney has selected 21 year old Paddy Jackson of Ulster at 10 ahead of Ronan O’Gara.

Jackson has talent but is unproven at this level and although Ulster are riding high in the league he’s hardly set the world on fire and will miss Pienaar to help him out. International rugby is a couple of steps up from Rabo Pro 12 but if he’s allowed to get time on the ball he’ll grow in confidence as the match progresses. Scotland can’t allow that to happen. Get him rattled and (our) Jackson, Scott and Hogg can feed off any errant passes and kicks.

Scotland lost the battle for possession against Italy but still won big. Look at England against Ireland and the stats are almost identical. Winning the battle for possession does not mean you win the war. Scotland need to soak up pressure in defence, go for territory through the boots of Hogg and Laidlaw and pounce on the slightest of Irish errors. But the territory kicking has to be good.

The forecast for Sunday is light snow. Ireland tried too hard to play their game against England, regardless of the weather, and it cost them. England played the game the weather dictated, and despite being ugly, it got the result. Wet slippery conditions might suit Scotland’s current strategy of being aggressive in the ruck, booting for territory and feeding off scraps.

Scotland have never handled the “favourites” tag well and there is a danger that victory against Italy and the number of Irish injuries might have some fans and players expecting an easy time of it. Ireland have much more depth than Scotland and Sunday’s line up is dominated by players from an Ulster side riding high at the top of the Rabo Pro 12. Friday night’s match between the Warriors and Ulster is sure to provide an interesting amuse bouche prior to the weekend’s main event.

There’s no room for any complacency. Much like Richie McCaw at the World Cup, a one-legged Brian O’Driscoll is still better than most international centres playing on two. Ireland might be without a number of first choice players but their replacements will be keen to show that they’re not just keeping the shirt warm for its incumbent.

Our regular number 5. The breakdown/tackle contest/tackle battle. Scotland need to avoid getting isolated when carrying ball. That weird ‘choke’ tackle the Irish are so fond of (where they prevent the ball carrier from going to deck) only works if they can target an individual ball carrier. God knows what’ll happen when Denton gets on.

This tactic creates as many penalties against as it does turnovers for them so the referee will be vital. Scotland will need to adapt to how the contact area is refereed. Kelly Brown was more vocal with the referee against Italy than he has been in the past and it seemed to work. Kidding on they have an edge in the scrum even without Euan Murray might help.

Aggression will be key. Scotland seemed to have regained some fire in their bellies that had been missing in the last few years. Whatever they did in the run up to the match to get that fired up needs to be repeated come Sunday afternoon.