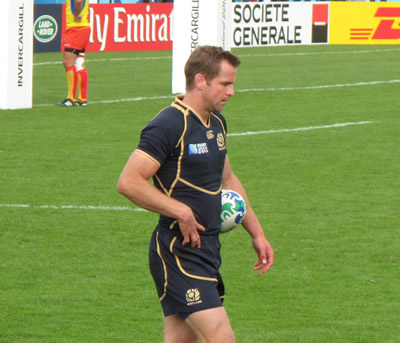 The almighty dollar has a hex over all of us. It is a simple fact and one that, particularly in professional sport, is fearfully respected. If you find a way to market something you are almost duty bound to take it, are you not?

In recent Scottish rugby history there have been too few heroes. If one were brutally honest it could be stated that Scotland have had a dearth of world-class talent in the last decade or so. Now we have some new, exciting, marketable players in Richie Gray, Stuart Hogg and Tim Visser. This is a relief, because the SRU could not just keep wheeling out Gavin Hastings for every single marketing opportunity.

However, in the period where Scotland were poor, one man stood out as a fan favourite. Chris Paterson scooped more caps than anyone else and he did so with the love of a nation.

At one point the world’s most accurate kicker, Paterson was never the most physical, the most athletic or the most dangerous, but he was capable of some beautiful rugby and he had spirit. If there is one thing a glory starved support appreciates, it is spirit.

Now, though, as he retires and others are told to seek their fortunes elsewhere there is something strange happening. Edinburgh and Glasgow have signed some players that will command large wage packets like the Lamont brothers, Welsh pair Rees and Yapp and All Blacks MacDonald and Atiga. The season has been good so there is a bit more cash, but these signings have all but burned that up.

See, the experienced players moving on from the pro sides are moving on because they have been around a while and after so many incremental increases in wages any new deal would cost more money than before. It is therefore much cheaper to get in new players for much less.

It all boils down to money. If the SRU were prepared to offer astronomical wages to Richie Gray while Barclay and Rennie sign on for much more than they were on before, then budgets evaporate pretty quickly.

How does one recoup the money lost? Obviously everyone crosses their fingers and hopes that Edinburgh and Glasgow can double up and recreate this season’s form next term. However, there needs to be something done on top of that. There needs to be more marketing.

Today the SRU unveiled a new role – one too bewildering to have a title yet, in an age where the SRU are already struggling to create titles for Scott Johnson and Sean Lineen – which Chris Paterson straddles. He will be a Coach/Ambassador.

The SRU hope to cash in on Paterson’s popularity. On top of this, though, they cannot justify such an ambassadorial position without getting more from him. He trained as a teacher when he was younger so coaching seems logical. They just need to net him some shiny new drills from New Zealand, the kind Gregor Townsend is so fond of.  They need to get Paterson some coaching qualifications from somewhere.

So more money is scraped from the treasury and Paterson is sent on the Macphail Scholarship alongside another long established DO. They travel out beside two players already earmarked for stepping into the pro games.

This is where the Macphail initiative falls down. They have the funds to send four players to develop, four players who could become able to face the pro game with a push. Instead they send two players already deemed good enough and a coach who is from New Zealand and who is already deep inside the SRU coaching system. On top of this Paterson is sent to learn “how should you watch a game as a coach?” and to learn about long-term and short-term plans.

Could he not learn about that in Scotland? The fact that he is not sends a message that there is absolutely no confidence in the way coaches are trained in this country. With changes already coming in in that department would money not be better spent on that fundamental?

In the end the SRU can trot out as many popular figures as they want, but there are two areas they need to work on desperately. They need to ensure that they have as many quality young Scots players coming through as possible, with highly developed skill sets (which would mean that players from the English Championship are not heralded as coups) and the national team need to markedly improve their results.

I believe in the changes Robinson and Lowe are implementing with the bringing in of exciting young internationals, and I am hopeful for the future. However, with the Macphail Scholarship and some of the signings from England’s lower reaches they have snubbed Scottish youth. They have misplaced their enthusiasm and will spend a fair bit of money in the process.

7 comments on “The SRU Create New Post for Paterson, But Spurn Youth”