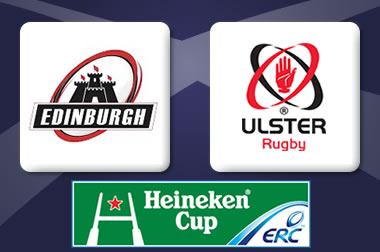 Edinburgh’s at times glorious Heineken Cup campaign came to a close at the weekend with a narrow defeat to Ulster in front of an Aviva Stadium in Dublin heavily favouring the Irish province.

I have to admit it could have been a lot worse, given some of Ulster’s performances against the capital men in the RaboDirect PRO12. Luckily for the hearts and souls of the ever growing Black and Red army, the right Edinburgh turned up and put in a spirited performance, if not a great one.

It surely had the potential to be a great one, with Edinburgh able to subdue and probe Ulster for long periods of the game and the backs and forwards both breaking over the gain line more often than Ulster’s usual defence would allow. Their discipline was pretty good too; no silly yellow cards this time. In the end though there were a couple of factors hard to ignore that did for Edinburgh: the error count and the scrum.

Edinburgh were in disarray while Ulster were a power at scrum-time, forcing points to appear almost by magic  just when they needed them to kill Edinburgh’s momentum. In turn Edinburgh tended to force the issue and dropped the ball as if by magic just when they needed points, also killing their momentum. For every great offload and line-break (there were plenty of each), there was a pass thrown behind or dropped with an overlap there to use. For every try-line turnover where a wee number 10 snatched the ball off a giant South African Number 8 rumbling for the line, there was a woefully squint throw to the scrum-half at the lineout when a straight one to the pack would have done just fine.

These good moments can turn the direction of matches if used correctly, but as it turned out there was an awful lot of going round in circles.

Sure, Poite could have – should have – called the ball out of the scrum for Wannenburg’s try, and he should have carded Ferris for slapping the ball out of Blair’s hands – you can bet if it had been De Luca he would have been punished. But Edinburgh should have executed their basic skills throughout and scored the tries they always looked like they could score. Then all of that wouldn’t have mattered.

There were far too many passes dropped or thrown poorly for this Edinburgh team to have progressed against an Ulster team led throughout by the peerless Pienaar. Although Laidlaw was just as effective with the boot from tee, and led his team brilliantly by example as he has done all year, in the end the South African’s class was just a little more decisive with boot and ball. I imagine the gulf in pay cheques is much larger.

That they so nearly did win and the deficit was only a couple of points (Ulster put a total of 80 past Edinburgh in the league) is a great credit to what Michael Bradley and his young squad have achieved this year, and could achieve with just a little more concentration, a little more clinical play.

It is also heartening that barring Mike Blair, who is off to pastures unknown (the Perpignan move is apparently off), this same team could be fielded again next year. What about a backline of Laidlaw, Scott, Visser, King, De Luca, Jones, Brown for next season? That’s before you figure in the new signings such as Richie Rees, Greig Tonks or Ben Atiga. It’s a similar story in the pack, where the new signings will help add a little more depth off the bench than Edinburgh currently possess anywhere apart from the back row, but where the first string looks settled and powerful.

This Edinburgh team still has plenty of attack left in them, and the lessons they have learned this season in the Heineken Cup are probably more valuable than any these players may have had in an international jersey. The one about never giving up and fighting to the last gasp was on display again here with Thompson’s late try, and has been a hallmark of their season in Europe.

Long may it continue.