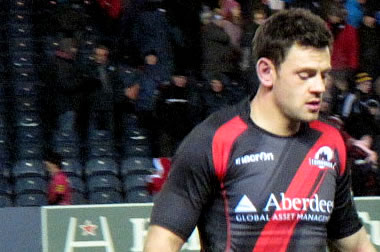 It was a move that was brought about because of a torrent of abuse pumped out through the social media outlet. Some fans, angry about the way things had been going and looking for a target, decided to abuse the centre, who had been yellow carded for his senseless off-the-ball tackle of Jonathan Davies in the defeat to Wales.

This is a point of contention because it brings back arguments made a week earlier when Dan Parks was said to have retired following a torrent of vitriol. He has since stated that he did not retire because of this, but because he felt the time was right.

The upshot of this was that several quarters rose to defend Parks. They also offered several reasons as to why he was abused. Some said it was because he was Australian by birth. I tend to dismiss this as nonsense. I wrote a piece about Parks for Talking Rugby Union where I appealed for a balanced view of the player and I tend to give most rugby fans more credit than labelling them sheep or impulsive drones. I feel that most did a primitive SWOT analysis, of sorts, and decided Parks’ weaknesses outweighed his strengths. However, what is important is that he was faced with abuse and no professional in any vocation should have to face that.

On the way to a press conference with Steve Scott, rugby writer for the Courier, we discussed Parks before the squad to play England was even selected. He stated his view that Parks was the pragmatic choice and I tended to agree. We both accepted he had had his fair share of sledging from the fans and that he would never win them round. At this point I ventured forth with a prediction that Nick De Luca would share the same fate.

For my clairvoyant sins, I wish I was wrong.  My argument was that with a similar SWOT analysis most would see how steady he was, how good his 2011/2012 Edinburgh form was and compare it with his list of blunders from a missed pick-up in the World Cup to his past performances where he chased a game too hard.

It seems that it has come to pass and a select minority have acted upon this analysis and vocalised their dismay. To the player himself.  With expletives and hate.

The issue with this is that De Luca is no Parks. He still has time to translate his Edinburgh form for Scotland. If nurtured he could be Scotland’s 13 outside a new 12. He has the skills and he has been ever present in Edinburgh’s good Heineken run. Yes he has made mistakes and is yet to do that one brilliant thing to win us all over. With support he has more of a chance of getting there.

With Twitter it is a place for players to voice their opinions. Sometimes. I have heard some players state that the Union sometimes exerts a bit too much control on them in terms of what they say on social networking sites, but by and large it is a good forum for players to interact with their fans.

Unfortunately another player, like Rory Lamont, who had something different to say and did not just harp on about Nando’s and Xbox has been forced to silence themselves. Even more worrying than this players have come out and condemned sections of the fans and called in to question the level of support some are getting.

I had a lively discussion about ‘negativity’ in the social sphere with some fans today. They stated that the press played some part in this by promoting negative opinions. I will state that our nation’s expectations before the 6 Nations started where out of scope, too high and too optimistic. I will also suggest that some sections of the press have been a bit harsher with their pointing out of poor performance than others.

I would not, though, suggest for one second that professional journalists in Scotland would want Scotland to do badly or that they thrive on negativity. They are fans like you or I and they have different ways of pointing out that too few risks have been taken with selection or that big mistakes were made by individuals or that our attack has been toothless. These are unavoidable facts.

However, in this discussion valuable points were made. Fans should band together when times are tough like this, and abuse should never be uttered.

My biggest concern in all of this is that a rift may form between the players and the supporters. It is hard enough for a team that is reeling from two losses. They do not need to invent in their head a scenario where they are facing their opponents and their own fans.

I asked the SRU for an official statement about whether or not they were concerned about abuse and whether they were worried about an ‘us versus everyone else’ mentality forming in cliques within their camp. All I got in return was: “Scottish Rugby believes social media is a useful and positive tool for players and coaches alike to engage with supporters of both professional clubs and the national team.  We greatly appreciate all the support from fans and we will continue to support players using social media.”

They may be closing ranks on this one. Maybe the fans should do the same…

9 comments on “Sticking Together Despite Scotland’s Social Issues”