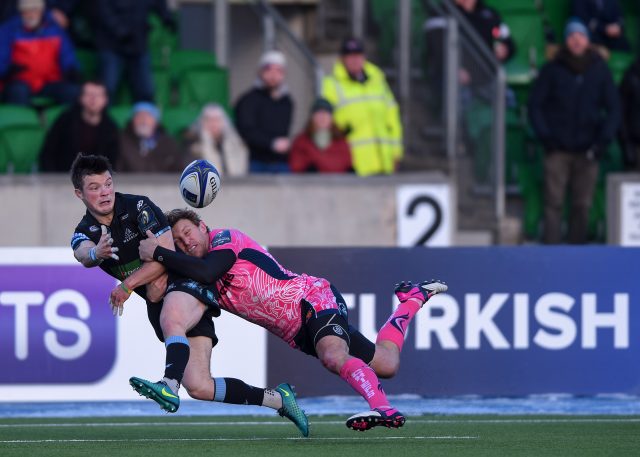 As many regular readers of the blog and listeners to the podcast will know we have been discussing the issue of Exeter Chief’s branding for some time. We have taken a decision to publicly ask that Glasgow Warriors ban Exeter fans from wearing headdresses and singing the “Tomahawk Chop” at Scotstoun when the teams meet in the Heineken Champions Cup in December.

We are writing regarding the Warriors’ upcoming home fixture against Exeter Chiefs to ask that the club gives serious consideration to banning Exeter fans from wearing headdresses or chanting the “Tomahawk Chop” within Scotstoun.

You are no doubt aware of the ongoing controversy surrounding Exeter’s decision to continue to use Indigenous American imagery and iconography in their branding and a section of the club’s fans continued use of headdresses and chants at games.

You will have hopefully been able to watch the interviews with LeAndra Nephin and Jen Nollkamper on this week’s Rugby Tonight on BT Sport about the impact these issues have on Indigenous Americans and why the club’s position on this and the behaviour of a section of their fans is considered to be highly offensive to their cultures.

Rugby is supposed to be a sport for all but whilst Exeter and a section of their fans continue to use Indigenous American imagery that cannot be the case. In order to truly be a sport that is open and welcoming to all people regardless of nationality, race, religion, gender, sexuality or disability we all need to take positive action to remove discriminatory and prejudicial practices.

Wasps have already taken a stand and opened discussions on the issue with the RFU, Premiership Rugby and other clubs but we are asking that Glasgow Warriors go further.

Glasgow has a proud history of protest and social activism that has had real far reaching impacts. From the women who formed Glasgow Women’s Housing Association in 1915 to the men who refused to work on aircraft for the Chilean Air Force in East Kilbride in 1970s and the City Council’s decision to award Nelson Mandela the Freedom of the City in 1981. We are asking the club to honour that history by taking a stand on this issue and saying that the offensive use of Indigenous American headdresses and chants is not welcome at Scotstoun.

It takes just one person to make a stand in order for others to follow. The Scottish people have strong ancestral links to Indigenous Americans. Historical research tells us that Scots forcibly cleared from the Highlands who made their way to North America found they had had much in common with Indigenous Americans and formed strong ties which continue to this day. In order to honour those ties we need to make a stand.