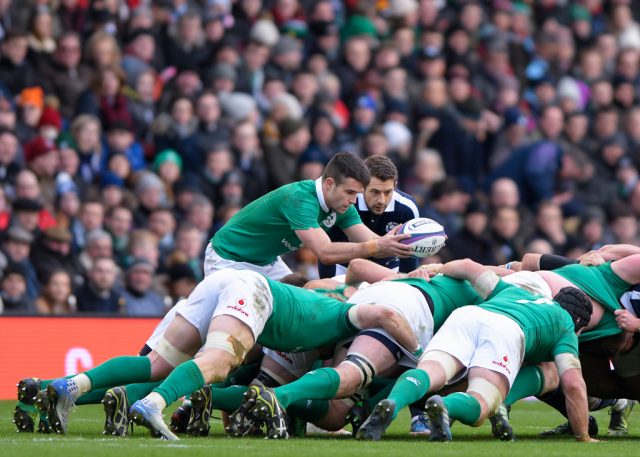 When you think of Scotland and Ireland you probably think of two Celtic nations that have nothing but love for each other, but that has not always true on the rugby pitch in recent years.

You only have to watch a match between a team from Scotland and one from Ireland (think Glasgow v Munster) to see that there is no love lost between the two nations.

At the end of 2020, Racing92 full-back, Simon Zebo, spoke about all the stick that he got when he was playing for Munster and his teammates found out that he follows Ryan Wilson on Instagram. Zebo was told in no uncertain terms that he should think about unfollowing the Scottish back row.

It is well known many of the Munster players do not like Wilson, and this is something that Wilson loves to revel in. This is just one of many incidents that show that players from both teams do not get on that well.

This Makes for Great Rugby

The fact that there are players on one side that dislike players from the other side is great for us rugby fans, as it adds extra spice as they attempt to get one over on their rivals. During an Ireland and Scotland match, you should never see any of the players on the field shirk a tackle. When either team wins a penalty in the scrum, you will see them celebrate with gusto as if they have all just combined to score the best try ever seen.

Scotland against Ireland is always a great match to watch, but you can make things that little bit more interesting by placing a bet or two on the match. There are many different rugby markets that you can bet on to spice up a game: such as the match winner, which team will score the first try, whether a certain player will score, and the number of points that will be scored in a game.

There are many great betting sites available that allow you to bet on plenty of different rugby outcomes. When it comes to finding the best rugby betting sites, take a look at betinireland.ie which specialises as a rugby betting comparison site. They have a team of sporting boffins that can help you to pick a quality sports betting site – no average bookies to be found, should you opt to register with one that they recommend.

Unfortunately, us Scots have been quite friendly to our fellow Celts over the last few years and they have had plenty to rub in our faces. For example, in 2019 Six Nations, Ireland had just been pumped by England in the first round and came to Murrayfield needing a win to get their campaign back on track. Scotland gifted Conor Murray an early try and went on to lose the game.

Before the 2019 World Cup, Ireland got another pasting from England and needed a confidence boost at the World Cup. Once again, Scotland helped them out by giving them three tries in 25 minutes. The World Cup was considered a failure for both Scotland and Ireland, and at the start of the 2020 Six Nations, Ireland were rebuilding after the Joe Schmidt era. Scotland were chasing a rare win in Dublin but then in typical fashion let the hosts out of jail thanks to goal line fumble from Stuart Hogg. Hoggy celebrating a try he didn’t score may not have endeared him to the Ireland fans watching though it’s fair to say he’s matured a lot in recent years.

The Autumn Cup rolled around, and Ireland were in need of yet another shot in the arm after yet another dismal loss to England and a poor showing against Georgia. Andy Farrell, Ireland’s coach, was already under severe pressure and knew that a loss could cost him his job. However, he had nothing to fear as Scottish indiscipline let Ireland walk away with the game.

The next time these two sides will meet is on the 14th of March 2021 in the 6 Nations. This will be the fourth round of the tournament for Ireland but only the third match for Scotland after France were forced to postpone, which makes it even harder to judge who will be in with a chance of lifting the trophy the following weekend. With two losses, Ireland like they are out of contention which is a strange situation for them.

Given the fact that Ireland have beaten Scotland in the last five matches that they have played, and the fact that from the last 27 matches between the two sides Scotland have won just six times, the bookies are obviously going to have Ireland as favourites even at BT Murrayfield to make it six in a row. Scotland were a little too helpful to Wales but after the game against England have the undoubted class to put this Irish side away.

So, who do we think will win? Well, as Scotland fans, our hearts are obviously telling us that Scotland squad will get the monkey off our backs and win for the first time in five matches against the Irish, by 7.

But not if it gets too feisty.

Elements of this post have been paid for by our sponsors. Please gamble responsibly.