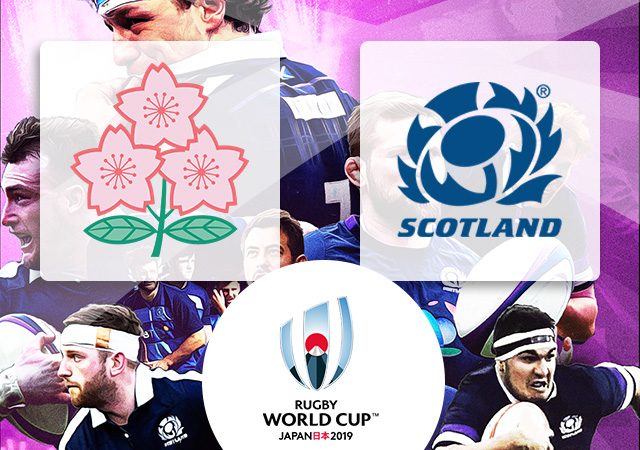 In this game of huge importance both to Scotland and to Japan, after a week in which it looked like it might not even happen at all, when it did finally kick off: Scotland fluffed the kickoff.

Not a great omen.

Despite that, Scotland played very well in a frenetic opening five minutes, defending some rapid Japanese play before Allan Dell snaffled a turnover. Finn Russell misjudged a grubber kick that bounced off a Japanese hip and sent the hosts scampering up the other end with the ball. Tommy Seymour had to make a very early try-saving tackle.

Finn made up for it minutes later when from a series of rucks close to the Japanese line he darted through the defence to make it look easy and open the scoring.

Things were never as easy again.

Japan were moving the ball very quickly with superb accuracy, side to side, line-busting carries before hitting Darcy Graham’s channel. Over and over they did it, and it worked almost every time, though Graham was making the tackles every time.

Matsushima got Japan’s first points that way, although the second try was much more of a team affair, Scotland’s scramble defence unable to stop the Brave Blossoms from offloading in the tackle in their trademark style.

Japan were operating on 78% possession for the half and Scotland had made 100+ tackles before half time with Japan less than a third of that. It was superb accuracy from the host nation and Scotland hadn’t been in Japan’s 22 since that opening ten minutes.

With Scotland requiring to limit Japanese bonus points and thus scoring in order to progress to the quarter-finals, by the time Kenki Fukuoka beat Stuart Hogg to score their third try, that was looking very unlikely indeed.

Any hopes of a Twickenham style recovery were probably closed down when early Japanese defence smothered Chris Harris and the ball bounced loose and Fukuoka sprinted in under the posts for his second to secure the bonus point.

Credit to Scotland they were not visibly deterred by the effective end of their tournament at that point and bringing Hogg – who we didn’t see the best of in Japan really – Sam Johnson and Graham into the game more – plus a superb break from Jamie Ritchie – gave them a rare excursion into the 22 before WP Nel dove over from short range for a lifeline of a try.

With half an hour to go, Townsend emptied the bench.

Scotland were upping the tempo and playing a fast offloading game like, well, Japan. Zander Fagerson did his bit for the front row union with a try following soft hands from Cummings and Gray. It was a long road back, but Scotland were on the road and within 7 points. Memories of Twickenham were stirring.

Japan weren’t going to take that lying down, of course, and put Scotland into a series of punishing, energy-sapping defensive sets. Jamie Ritchie snaffled a brilliant tunover but at what cost to their newfound momentum?

At their next attack Russell was looking like he had a little more time on the ball but a sure-fire try was chalked off for a forward pass from Pete Horne. That just meant Japan set themselves in for another long spell of nerveless possession. Their error count had increased enough to give Scotland a sniff, but it was a faint one.

Even with 20 to play Scotland’s task was huge. But at least finally it felt like a game of rugby. There were even some Zandbags as the otherwise outstanding Jamie Ritchie came off the wrong end of a breakdown penalty and got into a scuffle.

Scotland kept the pace up even though you could see they were knackered, and George Horne made a great difference at scrum-half. But passes were still going astray; too far in front, too far behind.

Of all things, Scotland through their replacement front row of Reid, McInally and Fagerson, earned a scrum penalty to keep the final moments played in the Japanese 22 but the hosts were probably content with the clock now well on their side. Visibly tired, the men in navy blue couldn’t quite conjure the magic needed which would, ironically, have earned them the draw we spent the week arguing about.

Japan, brilliantly coached, and competitive all night at the breakdown, didn’t fancy that ending; they pinched a turnover and ran the clock down.

Good luck to the hosts in the next round – you wonder how many perfect games they can have – but they’re certainly the most fun to watch of the sides now in the quarter finals and top the group.

It was a disappointing end to Scotland’s Rugby World Cup given the promise a lot of these players hold, but at least we won’t die wondering.

They played the fixture, and they lost. But it was, in the end, just a game of rugby.