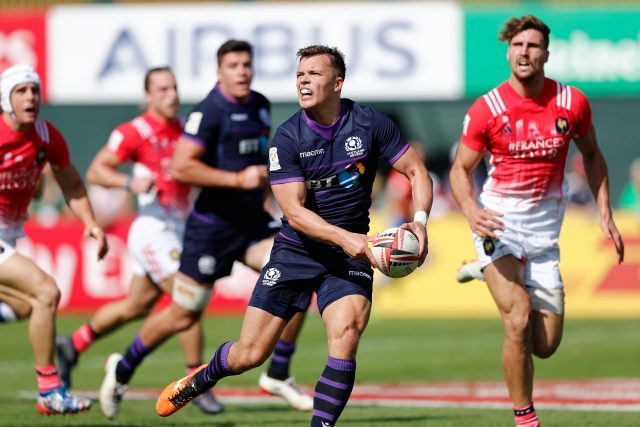 Gavin Lowe of Scotland leads an attack against France on day one of the HSBC World Rugby Sevens Series in Dubai on 1 December, 2017. Photo credit: Mike Lee - KLC fotos for World Rugby

In the heat of Dubai winter, a positive start to Day 1’s action was not enough to build momentum as Scotland crashed out in the plate semi-finals, losing in extra time to Samoa.

One notable breakthrough was the performance of Edinburgh’s Darcy Graham. Eight tries over the weekend was enough to place him tied at the top of the try scoring charts and place him in the official ‘Dream Team’ for Dubai, whilst head coach John Dalziel described him as “another Stuart Hogg in the making”.

From the start his attacking prowess was on display for all to see as a brace of tries, along with efforts from Ross McCann and Nick McLennan were enough to see past the error-prone France 24-12.

Victory over a Spain team making their comeback as one of fifteen core countries on the Sevens World Series would guarantee a place in the cup competition for Day 2, although the Scots were forced to work hard for victory.

Hawick youngster Graham snatched his second double in as many games whilst Sevens debutants Max McFarland and Harvey Elms also featured on the scoresheet, putting the lid back on a strong Spanish effort in the match. It finished 26-21 and assured progress to the second day’s Cup draw.

However, the promise of these opening exchanges quickly fell apart as an awe-inspiring England side cruised to a 0-29 victory in the third pool game. With England clearly the fitter of the two sides, Scotland spent the majority of the game on the back foot in defence and struggled ever to threaten the opponent’s try line.

Desperate for a positive start against Olympic champions Fiji, Scotland failed to find an early footing in the match, conceding within 15 seconds of the kick off. Although the Scots showed some good promise in attack – led by Jamie Farndale and the ever-impressive Graham – some lacklustre defence and lack of physicality up front allowed Fiji to progress 24-35.

Dropping down to the plate for the semi-finals, it appeared clear that the effort required defending against England and Fiji in previous games had begun to take its toll and Scotland looked like they were wilting in the desert heat. Samoa’s 5-22 lead with three minutes remaining appeared unassailable.

However in much the same fashion as their shock victories against South Africa and New Zealand among others at the end of last season, a Scottish comeback began. McLennan, Graham and Farndale all crossed in quick succession, although with only one of the three conversions successful, extra time was then required to separate the two teams.

Alas, the final push came to no avail as Samoa’s Joe Perez scored a “golden” try following a wild Scottish pass which gifted possession to the opposition at a time when any score – even a drop goal – would have been enough to progress to the final.

Certainly the experience in Dubai highlighted the work that still needs to be done by John Dalziel in his first year, particularly with aspects of the defence needing polished. Let’s not forget, previous coach Calum Macrae is now Edinburgh’s defence coach and put a high priority on such matters. However, to reach the cup competition on Day Two in the first tournament is an impressive achievement given the relative inexperience of the squad.

The World Series now moves down to Cape Town where Scotland will face competition from England and Argentina in Pool C. Given they are already in South Africa with Edinburgh, there has been speculation that Fife and Johnstone could return to the Sevens squad for this weekend, although with Edinburgh preparing to maintain their unbeaten run in the Challenge Cup, Richard Cockerill may choose to retain those core Sevens players as he wants to put out his top team to face London Irish at home.

Nonetheless, with Darcy Graham showcasing his immense potential in the World Series after his starring role for the national U20s last summer, John Dalziel has his own emerging stars to select in the heat of Cape Town this weekend.