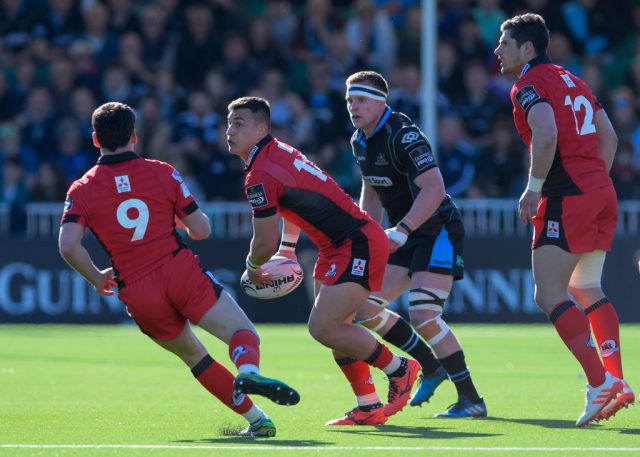 In one of the surprises of the season, Edinburgh finally looked to have developed a strong and stable defence when the mood takes them. With new leadership arriving this summer (Richard Cockerill spent the day at Murrayfield yesterday), this was a great opportunity for the players to show what they can actually achieve.

15. Glenn Bryce: Took his try in the final minute well and looked solid in defence. A strong runner but a noticeable lack of creativity compared to his opposite number, however – 7/10

14. Damien Hoyland: In attack looked threatening and he also did enough to convince the ref that Tommy Seymour was held up over the line. Would be good to see him come off his wing more often to attack – 8.5/10

13. Chris Dean: Solid game and some important tackles close to his try line helped keep his side in contention. Made more tackles than any Glasgow player  – 6/10

12. Phil Burleigh: Performing well in his role as a second receiver, but subbed off just before half time – 6/10

11. Blair Kinghorn: Couple of good breaks down his wing, although he appears better suited to full back where he can remain more involved in the game – 6.5/10

10. Duncan Weir: In what was for the large part a battle of the kickers, Weir’s work off the tee stood out, essentially winning the game for his side. However must learn to avoid costly missed kicks to touch – 9/10

9. Sam Hidalgo-Clyne: Provided pace to the Edinburgh attack and with the news that Greig Laidlaw has been selected for the Lions, may have just earned himself a place on Scotland’s summer tour – 8/10

1. Allan Dell: Penalised early on for pulling down the scrum, although he eventually found his composure – 6/10

3. Simon Berghan: Like Dell, took his time to settle into the scrummaging routine but kept defending right to the end – 6.5/10

4. Grant Gilchrist: Some clever disrupting work in the maul quashed a few Glasgow chances whilst he came second on the tackling charts – 6.5/10

5. Ben Toolis: Like Gilchrist, except with much more conviction. Another one of those lynchpins in defence and someone who should be hoping for international honours this summer – 8.5/10

6. Jamie Ritchie: Appeared quiet but his 20 tackles tell a different story. A player with great potential who is perhaps unlucky that Edinburgh appear to have an abundance of great back row talent right now  – 8/10

7. John Hardie: Yet to return to top form following injury, in the end only played 45 minutes of rugby if you include the necessary substitution with Cochrane in the first half – 6.5/10

8. Cornell du Preez: Made the most metres of any Edinburgh forward whilst making 12 tackles. Leading the defence, du Preez appears to be performing at just the right time – 7/10

16. Neil Cochrane: Enjoyed a brief cameo in the first half and then 12 minutes at the end, didn’t have much opportunity to do anything other than tackle – 6/10

17. Murray McCallum: Replaced Dell after 57 minutes, had a quiet game but has certainly shown great progress in a rapid rise this season – 5.5/10

20. George Turner: Was this another Cockerill request, playing a hooker in the back row? Made some good tackles in his time on the pitch – 6/10

21. Sean Kennedy: Pace seemed to slow with the arrival of Kennedy on 69 minutes, although this may have been as much down to tiredness or team tactics as individual skill – 5.5/10

22. Junior Rasolea: Looked fairly sold with the ball in hand, although Edinburgh missed having a passing 12. Their search for a midfield continues – 5.5/10