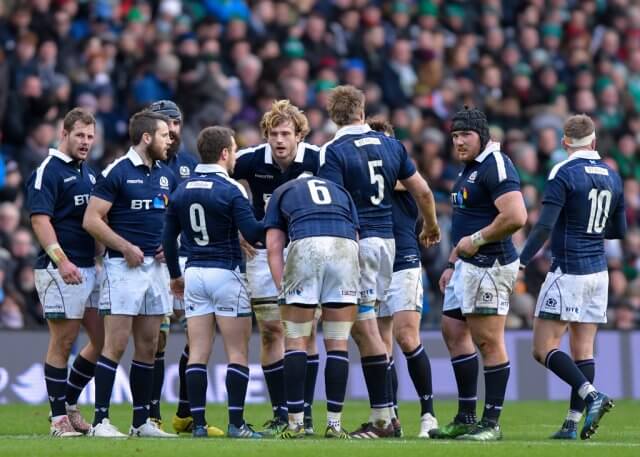 Two late Camille Lopez penalties condemned Scotland to an eighth consecutive defeat in Paris on Sunday, but what do Vern Cotter’s side need to do to turn the performance round and see off Wales a week on Saturday?

There were obvious problems – Scotland lost captain and deputy, Greig Laidlaw and John Barclay, in the opening 40 minutes, while the scrum was going rapidly in reverse all afternoon.

In fact, the situation seemed to get worse when Gordy Reid and Ross Ford, the perceived ‘better scrummagers’ took the field, albeit along with Edinburgh’s second-choice tighthead Simon Berghan, for his Test bow.

The excellent Fraser Brown, along with centre Alex Dunbar, are both now following the graduated return to play protocol. Dunbar passed his HIA 1 during the match but developed some symptoms, possibly in keeping with concussion, after the match.

The scrum must be top of Cotter’s priorities as Wales travel north buoyed by their display against England and with destructive scrummagers aplenty in the shape of Rob Evans, Nicky Smith, Samson Lee and Tomas Francis.

Set-piece is not the only issue, though. Scotland looked bereft of leadership in the closing stages, and if Laidlaw is to miss the Wales match, there could be an argument made for parachuting Henry Pyrgos back into the side, and keeping two-cap Price on the bench.

Pyrgos has captained the national side before, and his experience could be vital if Cotter is robbed of both Barclay and his talismanic number nine. Laidlaw injured his ankle in the 24th minute and was wearing a medical boot afterwards. As an exile player, he now returns to his club, Gloucester, for further assessment during the fallow week of the RBS 6 Nations.

There are others to lead, though – Jonny Gray would be the prime candidate given his leadership experience with Glasgow – while Price is the man on form for the Warriors, so probably deserves the scrum-half berth if Laidlaw doesn’t make it. 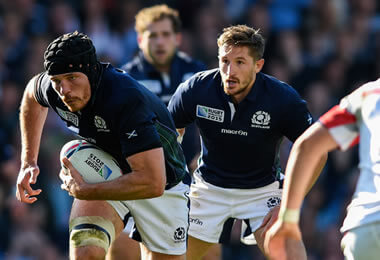 Henry Pyrgos (right) could come in if Scotland are without Greig Laidlaw against Wales, while Tim Swinson has been impressive off the bench vs Ireland & France. Pic © Al Ross

France were wise to Scottish forwards carrying short off our scrum-halves – and Wales will be similarly well prepared, but Scotland must stick with it. Against a much bigger Les Bleus pack, they made ground, and strong carrying close to the ruck could tie in Warburton/Tipuric and allow for room out wide.

Perhaps we went to Paris to move the colossal French pack all over the Stade de France pitch, but that did not materialise, on the whole, and Wales are a better and fitter side in that regard.

Back-row forwards John Barclay, and his replacement John Hardie, both sustained head knocks in the game and are subject to the completion of the HIA process. Barclay also requires further assessment on a shoulder injury which will take place at his club, Scarlets.

Regardless of injuries to the Johns, there might be a need for more ballast to join the back-row, to aid the immense Josh Strauss, Fraser Brown (both of whom played their best games in Scotland colours) and the Gray brothers in their carrying efforts. Strauss sustained a “heavy blow to his flank” and will be monitored by Scotland’s medical staff.

Ryan Wilson will come back into the mix, while Cornell Du Preez could be thrust into a Test debut and Rob Harley could come into contention for his work at the breakdown, where the 25-year-old is a constant menace. Magnus Bradbury and Adam Ashe may also be recalled to the training squad if the losses are longer term. 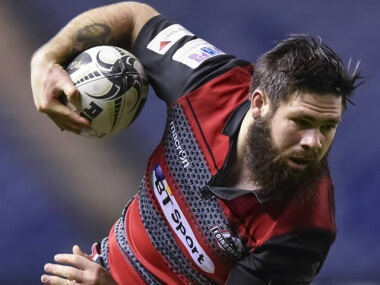 Could Cornell du Preez be set for his Scotland debut against Wales next Saturday? Pic © Al Ross

Finn Russell’s performance was below his best, but remember the Glasgow man was  the catalyst for Tim Swinson’s try with a lovely pass to Seymour, and ‘conversion-gate’ only came about because of a mix-up in communication between the referee and Nathan Hines, who instructed Russell to hurry the kick.

There is no question he is Scotland’s number one stand-off, and he will hope to get the back division firing at BT Murrayfield as they did against Ireland. Alex Dunbar may be a doubt after his head knock, so Matt Scott could come into contention to wear the 12 jersey, but expect the rest of the backs to remain.

Dunbar has been to the fore in both attack and defence, but against France Scotland struggled to get the ball into the hands of Seymour and Sean Maitland, and they may look to bring Huw Jones into the match more. All that, though, comes from securing clean ball at the breakdown and having a solid set-piece to play from. Scotland’s primary gameplan was stifled but they still outscored the French in tries and were in it with ten minutes to go.

The loss on Sunday might have extended Scotland’s run of defeats in the French capital, but there is no need for it to be doom and gloom when Wales come calling in two weeks.